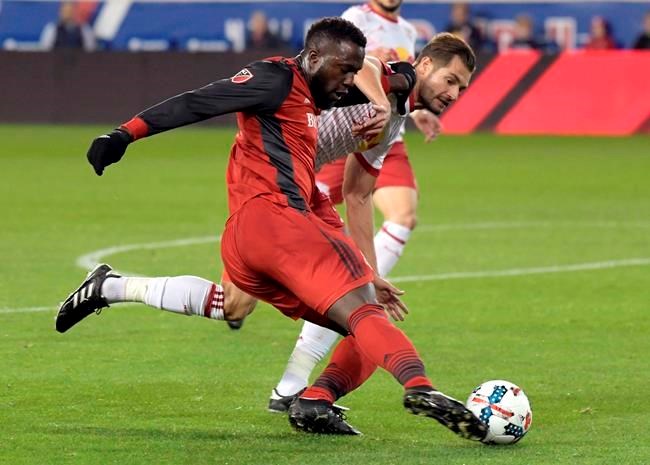 "Jozy is focused, if nothing else a little more motivated, which is always a good thing for us," Vanney said on the eve of Sunday's rematch.

The Toronto striker complained after Game 1 of the Eastern Conference semifinal Monday in Harrison, N.J., that an aggressive fan had questioned his religion and patriotism. Raised a Jehovah's Witness, Altidore does not put his hand on his heart during the U.S. anthem, instead standing with his arms behind his back.

Vanney was shown on the TV broadcast confronting a fan late in the game and telling him to sit down. The coach later complained to the league about the need for more security around the player benches at Red Bull Arena.

Motivated seemingly by the failed U.S. World Cup qualifying campaign, boo-birds targeted both Altidore and Toronto captain Michael Bradley in the regular-season finale in Atlanta and at Red Bull Arena.

In New Jersey, that included chants containing the F-bomb and the confrontation with a fan that crossed another line.

"Obviously you're going to get your boos, it's normal even though I think they're being targeted unfairly," he said.

"Once you start going at people's faith, religion ... that's over the top."

Altidore declined Friday to discuss the incident further. And Bradley preferred to focus on Sunday's game.

"I don't spend two seconds worrying about any of this stuff. I leave that to everybody on the outside to comment on, to discuss," he told reporters Saturday. "Ultimately it's noise, needless noise, distraction.

"We're totally concentrated on what we're trying to do and determined to make sure that nothing puts us off."

The league is investigating the incident at Red Bull Arena.

Toronto won the opening leg of the Eastern Conference semifinal 2-1 with Altidore setting up one goal and playing a part in the leadup to the other.