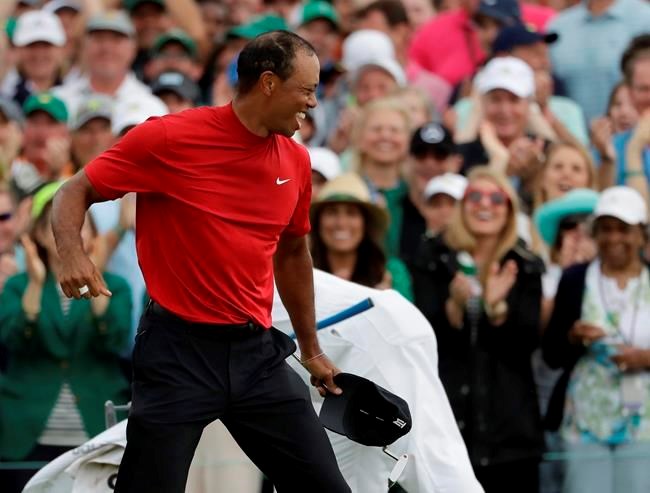 Woods has traditionally worn red shirts in the final rounds of tournaments. On Sunday, he donned a red mock turtleneck with black pants and a black hat.

"(On Sunday), there was a little bit of difficulty with people trying to place orders because of the amount of traffic," he said. "But that's common with our sale dates that we do have.

"If we do have a flash sale or have something happening specific to that day, there's a lot of traffic during the day on our website. It's happened before where people have had a difficult time placing orders but it's not every single day that that happens."

The combination of Sunday's win being Woods' first at Augusta since '05 and his first major victory since '08 created a huge demand for the red mock turtlenecks, which retail for $100.

Dorion said all Golf Town stores had the red mock turtleneck shirts available prior to Sunday's final round but demand skyrocketed with Woods' win. Dorion said as of Monday morning only 10 red shirts remained (two large, five medium, three small) in stores nationwide, but all were in Richmond, B.C., locations.

"We're always very, very ready for these types of events that go on in the golf world," Dorion said. "Now because this is kind of more of an iconic (thing) that Tiger does every Masters — he wears red on Sunday — we actually had this advertised before knowing well in advance that was going to be something he was going to end up wearing.

"So that's also as to why these have already been basically sold out."

"That's because if Nike has them available, we would be able to get them as a special order brought into the store," he said.