Tiger-Cats have many off-season decisions ahead, starting with head coach Jones

Hamilton Tiger-Cats head coach June Jones says he didn't give his players any emotional or motivational words of wisdom in his final team meeting Saturday as they cleaned out their lockers at Tim Hortons Field after a losing season.
0
Nov 4, 2017 3:19 PM By: Canadian Press 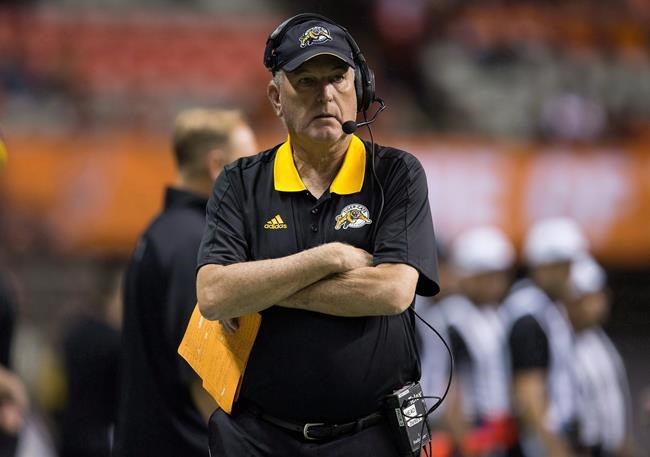 Hamilton Tiger-Cats head coach June Jones says he didn't give his players any emotional or motivational words of wisdom in his final team meeting Saturday as they cleaned out their lockers at Tim Hortons Field after a losing season.

"Just that I enjoyed the time here, and hopefully it will continue," he said.

And that might be key heading into the off-season.

Jones came to Hamilton on Aug. 2 as assistant head coach to Kent Austin, following an embarrassing 60-1 loss to Calgary. Three weeks later, Hamilton was 0-8 and Jones found himself as the head coach, after Austin relinquished the position but remained as vice-president of football operations.

Since taking over, the team went 6-4 — finishing 6-12 overall and missing the playoffs for the first time since 2012, but producing some optimism in the locker room moving forward. But Jones only committed to this season. He told a media conference on Saturday that if he returned to the CFL as a head coach, it would only be with Hamilton because he felt the front office had "done a great job signing the right kind of kids."

So in order to build on any momentum heading into next year, several major puzzle pieces are going to need to be put in place.

First, the team needs to find a head coach, Jones or otherwise. Three top receivers — Luke Tasker, Brandon Banks, and Andy Fantuz — are among several free agents. Jones's starting quarterback Jeremiah Masoli is a free agent, though he has stated he would like to come back if Jones is coach. Then there is Zach Collaros, the Ticats' starter to begin the season who led the team to the 0-8 start. Austin resigned, Jones took over and promoted Masoli.

What to do about Collaros, reportedly one of the league's highest-paid players and considered an elite quarterback until being demoted, will need to be answered. He has one more year on his contract.

Collaros told reporters after Friday night's win over Montreal that he would like to return to Hamilton, where he has many of his best friends and enjoyed being around Jones and learning from him. But where he will play and what his role might be is out of his hands.

"When you sign a contract, you don't get to make those decisions," he said. "So it will be interesting to see what the future holds."

There's also the issue of Johnny Manziel. Hamilton has until Nov. 30 to offer the controversial Heisman Trophy-winning quarterback a contract, or they lose their negotiating rights.

Austin, who remains Hamilton's VP of football operations and should have some of these answers, was not available for media questions until Monday.

Jones said the most positive thing he saw in the Ticats when he joined was their speed. So he made some changes, most noticeably switching quarterbacks, expanding Banks' role from a return specialist to a 1,000-yard wide receiver, and establishing a run game.

Other than Masoli, Banks has probably gained the most from Jones's tenure. He had 52 receiving yards before the coaching change. In his first game under Jones — Labour Day — he caught six passes for 98 yards and finished the season with 1,011 yards.

When he was asked if he would be more inclined to return to Hamilton under Jones, Banks replied: "Of course. He rejuvenated my career and got me the opportunity to do a lot of the things I always wanted (to do)."