MONTREAL — Adonis Stevenson wanted to take his time and wait for the right moment to knock out Andrzej Fonfara.
Jun 4, 2017 1:23 AM By: Canadian Press 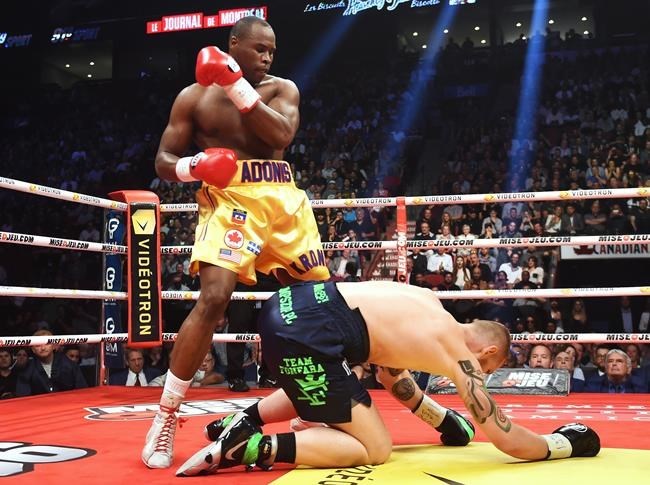 MONTREAL — Adonis Stevenson wanted to take his time and wait for the right moment to knock out Andrzej Fonfara.

That came only 28 seconds into the second round as Stevenson (29-1) used his crushing left hand to score a second-round technical knockout over Fonfara (29-5) and retain his World Boxing Council light heavyweight title on Saturday night.

The fight was stopped 28 seconds into the second with Fonfara's corner waving to referee Michael Griffin to end the one-sided beating.

"I said as soon as I catch him, I'm going to knock him out, but I wasn't sure I'd catch him that quickly," the Montreal southpaw said. "In the second, I put on the pressure and finished the job."

After pounding Fonfara to the canvas in the first and ending the round by raining blows on the Polish righthander, Stevenson went out in the second and landed at least five major lefts one after the other until the bout was stopped.

It was Stevenson's most impressive performance since he won the title in 2013 by knocking out Chad Dawson only 76 seconds into the opening round. It was his eighth title defence and second against Fonfara, who took him the distance and even knocked him down once in their 2014 meeting.

Fonfara came back a more experienced and confident fighter than the first time, but his decision to go after Stevenson from the outset backfired.

"I didn't see the first knockdown, it was so fast," said Stevenson's trainer Sugar Hill. "Everyone knows Adonis has a devastating left hand and that's their game plan, to try to stop the left hand.

Who he uses it on next is the big question.

Stevenson says his preference is a unification bout against the holder of the titles from the three other major sanctioning bodies Andre Ward, who in two weeks is to defend them against the fighter he took them from, Sergey Kovalev. But attempts to match him against them in the past have fallen through, partly because they fight on the HBO network while Stevenson's manager Al Haymon is linked to rival Showtime.

He's more likely to face fellow Montreal fighter Eleider Alvarez (23-0), who won a majority decision over fading former champion Jean Pascal (31-5-1) of Laval, Que. in the co-feature. Alvarez retained his position as the top-ranked contender and mandatory challenger for the WBC title.

"I want that fight now," said Alvarez, a Colombia native based in Montreal. "I think I've earned it."

It shouldn't be difficult to organize. Yvon Michel promotes both fighters.

Alvarez used his lightning quick jab to control his bout.

One judge surprisingly scored it even at 114-114 while the others had it 117-111 and 116-112 for Alvarez, who looked to have a clear advantage after Pascal took the opening round, putting him briefly in trouble after landing a solid right to the jaw.

Alvarez dominated the second. The only rounds Pascal won after that — the third, seventh and eighth — came from bursts of punches late in the rounds.

Alvarez, who has been waiting for a title shot for two years, re-established his jab in the final rounds to close out the fight.

"He did all he had to do, and didn't fall into any of Jean's traps," said trainer Marc Ramsay.

Custio Clayton (11-0) of Dartmouth, N.S. had his clash cancelled after opponent Oscar Cortez (26-2) weighed in 24 pounds over the 147-pound welterweight limit. Promoter Yvon Michel was unable to find a replacement on time. Clayton, a 2012 Olympian, was to have fought for two minor titles — the WBC Continental and the IBF International.

Mikail Zewski (28-1) of Trois-Rivieres, Que. made a successful return from a 20-month injury absence with an eight-round unanimous decision victory over Fernando Silva (15-11-3) of Mexico, which included a knockdown in the fifth.

Christian Mbilli (4-0), a Cameroon-born middleweight fighting out of Montreal, stopped Cesar Ugarte (4-2) 48 seconds into the second round of a scheduled four-rounder. Mbilli had knocked down Ugarte twice in the first round.