TORONTO — Ed Gainey has plenty of time to relish his record-setting performance. Gainey had a club-record four interceptions Sunday in leading the Saskatchewan Roughriders past the B.C. Lions 41-8 at Mosaic Stadium.
Aug 14, 2017 3:36 PM By: Canadian Press 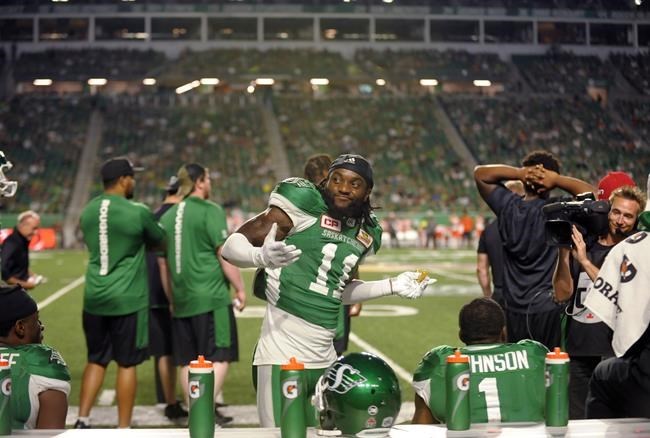 TORONTO — Ed Gainey has plenty of time to relish his record-setting performance.

Gainey had a club-record four interceptions Sunday in leading the Saskatchewan Roughriders past the B.C. Lions 41-8 at Mosaic Stadium. The picks were his first of the season and nearly doubled the six-year veteran's career total (nine).

Saskatchewan (3-4) earned its first win over a West Division rival but won't play again until Aug. 25 when it visits Edmonton (7-0).

What's more, Gainey's banner day came with his 10-month-old son Grayson in the stands. And the 27-year-old defensive back had the infant in his arms when presented the game ball in the Riders' dressing room.

"Last year . . . I pretty much dedicated the whole season to him," Gainey said. "Every game I had his due date written on my spat or my gloves.

"For him to come to this game, I just wanted to make sure it was memorable for him."

Gainey had a club-high three interceptions last year but had struggled early this season.

"It's been kind of hard for me, I've been pressing too much," he said. "Just going out there and leading by example, that's pretty much the best I can give these guys."

Gainey also had a fumble recovery, accounting for five of the seven turnovers Saskatchewan recorded in the game. The Riders had just two interceptions and five takeaways through the first six games.

"The defensive energy kind of carried the team," said Riders quarterback Kevin Glenn, who threw for 320 yards and three TDs. "When you've got the defence getting takeaways like that, you can't do nothing but put points on the board as an offence."

Saskatchewan captured the season series with B.C. (5-3) on point differential after dropping a 30-15 road decision to the Lions on Aug. 5. The Riders are a stellar 3-1 at Mosaic but 0-3 away from home.

Twice this season Saskatchewan has followed up solid home victories with road losses. The Riders beat Hamilton 37-20 on July 6 before losing 27-10 to Calgary two weeks later.

Then following a 38-27 victory over Toronto at Mosaic Stadium on July 29, the Riders lost to the Lions in Vancouver.

"If we want to be at the top of this league we have to win on the road," Glenn said. "We'll get a test off the bye week in Edmonton."

A fact not lost upon Riders coach/GM Chris Jones.

"We're going to take the bye and think about that," he said. "We'll look at things very closely how we travel, what we do when we get there, that type of thing, and come up with a solution."

"When I walk in here you guys should be doing what? Coming together," Buono told his team in the locker-room on TSN's pre-game telecast. "(You're) acting like we're not interested.

ESKS, BOMBERS CLASH: Something has to give Thursday night when the Edmonton Eskimos (7-0) visit the Winnipeg Blue Bombers (5-2).

Edmonton is the CFL's only unbeaten squad, coming off a 27-20 home win over the Ottawa Redblacks (1-6-1) on Thursday night. Winnipeg has won three straight, the latest being a 39-12 win over the Hamilton Tiger-Cats (0-7) at Tim Hortons Field.

It's the first of two meetings between the West Division rivals. Edmonton will host Winnipeg on Sept. 30.

Collaros has lost his last 11 starts dating back to last season. The 28-year-old quarterback, in his sixth CFL campaign and fourth with Hamilton, is eighth in passing (1,641 yards) with as many interceptions (seven) as TDs.

Collaros was 21-of-33 passing for 216 yards with a touchdown and interception in Hamilton's 39-12 home loss to Winnipeg on Saturday night. He was also sacked five times and had a couple of fumbles.

Defensive back Emanuel Davis, who was expected to make his season debut against Winnipeg, was scratched with food poisoning. And all-star defensive tackle Ted Laurent left the contest early.

Jeff Matthews started versus Montreal and was 8-of-12 passing for 67 yards while sophomore Cody Fajardo completed 10-of-16 passes for 75 yards. Running back Brandon Whitaker was Toronto's top offensive threat with 96 rushing yards on 13 carries.