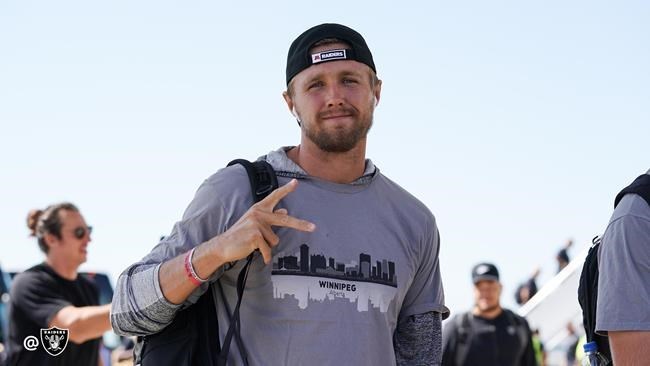 The Raiders tweeted out various photos on Wednesday of the team arriving in Winnipeg, which is set to host an Oakland-Green Bay NFL pre-season game at IG Field on Thursday.

Cole, seen in a photo taken shortly after landing at the city airport, was wearing a shirt that had "Winnipeg, Alberta," emblazoned across the chest.

After some online feedback from teammates, CFL teams and Winnipeg natives about the geographical error printed on his shirt, Cole tweeted: "apologies to the citizens of Winnipeg, Manitoba... just a kid from Atlanta, Florida playing football in Oakland, Nevada with a low geography IQ @Raiders."

The CFL's Winnipeg Blue Bombers got in on the action, responding to the original gaffe by tweeting: "We can't wait to visit you in Oakland, Nevada??" — a potential dig at the organization with the Raiders scheduled to move into a new US$1.8 billion, 65,000-seat stadium in Las Vegas in 2020.

The Bombers added: "we have a welcome gift for you, we didn't want to ruin the surprise but… It's t-shirts. A whole lot of new t-shirts."

Oakland placekicker Daniel Carlson, who was wearing a shirt supporting the NHL's Winnipeg Jets in a photo, also noticed the blunder and tweeted at Cole, "don't you know that Winnipeg is in Manitoba??? smh rookies..."

Cole was asked online where the shirt was purchased and said "if amazon prime counts as a cheap flea market, guilty as charged lol."

The Raiders and Packers arrived in Manitoba's capital on Wednesday.

It's the first NFL contest in Canada since the Buffalo Bills completed a run of eight games in Toronto with a regular-season clash against the Atlanta Falcons in December 2013.

P.E.I.'s Birt through to championship round at Tournament of Hearts
Feb 19, 2020 6:02 PM
Comments
We welcome your feedback and encourage you to share your thoughts on this story. We ask that you be respectful of others and their points of view, refrain from personal attacks and stay on topic. To learn about our commenting policies and how we moderate, please read our Community Guidelines.