The days of just one or two Canadian men's curling teams being clear favourites on the domestic scene are in the rear-view mirror. With the first Grand Slam of the new campaign to begin next week, the 2019-20 season is tough to call.
Oct 18, 2019 11:40 AM By: Canadian Press 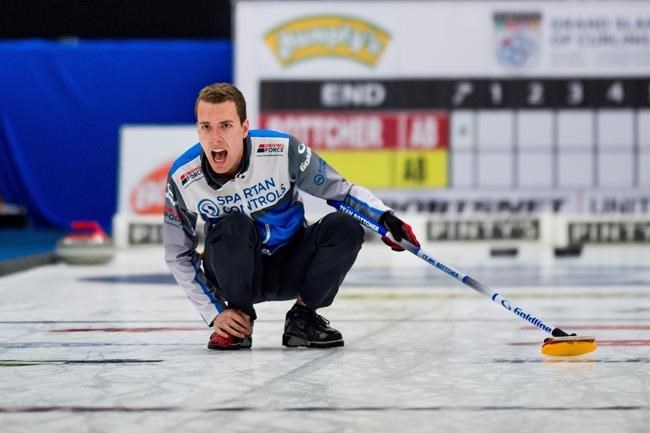 The days of just one or two Canadian men's curling teams being clear favourites on the domestic scene are in the rear-view mirror.

With the first Grand Slam of the new campaign to begin next week, the 2019-20 season is tough to call. At least five rinks are in the upper tier of a loaded Canadian landscape.

To use a Vegas term, it's essentially a pick 'em.

"There's the usual suspects at the top," said Sportsnet curling commentator Mike Harris, who won Olympic silver in 1998. "But the big changes I think are Jacobs getting Marc Kennedy on board and you've got Ryan Fry going to play with John Epping. I think that team is much improved as well."

Kennedy has been in form in the third position since returning after taking a season off. Fry and Epping, meanwhile, have created an impressive back end with Mat Camm moving to second and Brent Laing to lead with Craig Savill the odd man out.

"Both of those teams have an A-plus upside I would think," said TSN curling commentator Russ Howard, who won Olympic gold in 2006.

Koe, Epping, Bottcher and Jacobs own the first four spots on the Order of Merit standings ahead of reigning world champion Niklas Edin of Sweden.

There are other Canadian contenders to keep an eye on, too.

Mike McEwen beat reigning Olympic champ John Shuster of the U.S., in the final of the Uiseong International Cup in South Korea. Scott McDonald is coming off a breakout season and Matt Dunstone is close to cracking the top 10 on the Order of Merit.

Veteran skip Glenn Howard is still in the mix and two-time world junior champ Tyler Tardi looks like the real deal. Other names to watch include Braden Calvert, Jason Gunnlaugson and Kirk Muyres.

Russ Howard thinks Jacobs, who won the Brier in 2013 and added Olympic gold in '14, could be in position to return to previous heights.

"Brad Jacobs has been very underestimated in my opinion," he said in a recent interview. "Pat Simmons drew the pin to beat him in a Brier final. Koe made an unbelievable shot and beat him on a measure (in another Brier). He's been within a shot or two of winning maybe three or four Briers and he's an Olympic gold medallist."

Season 2 of the Olympic quadrennial is traditionally where things start to get interesting.

Teams that made lineup changes after the 2018 Pyeongchang Games have a season of reps under their belt. Spots for the Olympic qualifier ahead of the 2022 Beijing Games will be available starting next month at the Canada Cup in Leduc, Alta.

The Grand Slam schedule, which has been trimmed from seven to six events this season, kicks off Tuesday with the opening draw of the Masters in North Bay, Ont.

Bottcher will be looking to capture his fourth straight Slam after winning the Canadian Open, Players' Championship and Champions Cup last season.

Epping won the Masters last year and is back to defend his title. The 15 men's teams will be split into three pools with the top eight rinks advancing to the weekend playoffs.

There is also a 15-team women's competition at the Masters, which offers a $300,000 combined purse.