Toronto FC coach Greg Vanney doesn't anticipate the Montreal Impact making a ton of changes on Saturday in the aftermath of an abrupt coaching shuffle.
0
Aug 23, 2019 12:01 PM By: Canadian Press 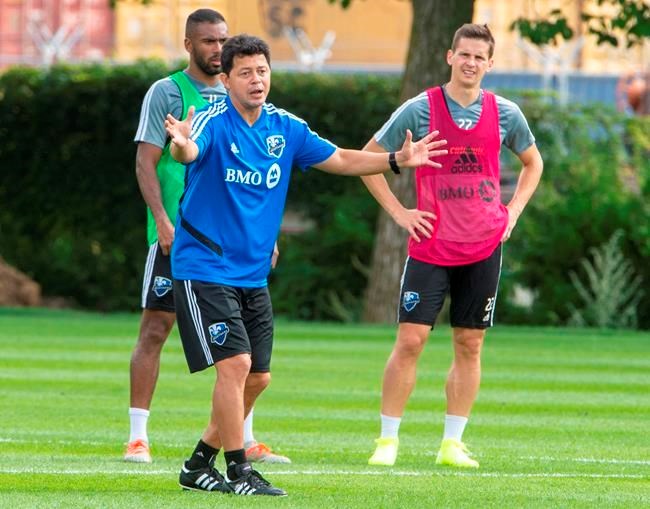 Toronto FC coach Greg Vanney doesn't anticipate the Montreal Impact making a ton of changes on Saturday in the aftermath of an abrupt coaching shuffle.

Wilmer Cabrera makes his debut as Impact coach in the latest edition of the 401 Derby at BMO Field, mere days after replacing the fired Remi Garde.

"This is something that happened on Wednesday and they have a game on Saturday. You can't change the world in two days," Vanney said. "My perception of things is they won't change a lot, especially in the short term."

A blown 3-0 lead in a 3-3 tie to FC Dallas last weekend was the last straw for Garde.

Despite leaving points on the table, Montreal retained the seventh and final playoff spot in the MLS Eastern Conference, ahead by virtue of tiebreaker on Orlando and Toronto. All three teams have 34 points.

"The idea for me, at this point, is not adapting the players to my philosophy," said Cabrera. "It's trying to help them with the rhythm that they have to be successful while making some adjustments."

Toronto FC defender Omar Gonzalez knows what to expect from a group of players going through a coaching adjustment.

Before arriving via transfer to Toronto FC in June, his Mexican club, Atlas FC, fired its coach following a five-game losing streak.

"I know that guys who were on the outside looking in now see they have a chance to show this new coach that they can be a starter," Gonzalez said. "I know they are going to be gunning for us, new coach and all, so we have to be smart and just worry about ourselves."

Garde's dismissal highlights a volatile season for coaches in MLS. He became the sixth coach to be replaced in 2019.

Cabrera was one of those casualties when he was replaced as coach two weeks ago by the Dynamo following a two-and-a-half year stint.

Although Toronto has a game in hand on Montreal and Orlando City SC, it has just three games left at BMO Field.

Toronto has only three wins on the road this season.

"I think anxiety is a good thing in soccer because it raises your level of focus," TFC goalkeeper Quentin Westberg said. "If you can shift that frustration into concentration and determination, then anxiety is good, in my mind."

Last week, Toronto picked up a point following a 2-2 draw on the road in Columbus against the Crew.

TFC SUCCESS IN DERBY: One of Toronto's three road wins this season was a 2-0 triumph in Montreal last month.

PIATTI OUT: Plagued with various injuries this season, Impact star midfielder Ignacio Piatti will not play as he sits out at least two more weeks with an adductor injury. Piatti had a knee injury that kept him out for nearly four months before he returned last month.

LASSI EFFECT: Since Lassi Lappalainen came to Montreal on loan from Bologna, the Finnish striker has four goals in four games.

SECOND-HALF SUCCESS: Toronto FC has scored goals in the second half in five of their last six matches. The only match in which they didn't score a second-half goal in that span was a 2-0 loss to the New York Red Bulls on Aug. 3.

ON TAP: The same two teams play in the Canadian Championship final next month.