WINNIPEG — Max Pacioretty was glad the Montreal Canadiens didn't get down on themselves this time. The captain scored a power-play goal at 3:07 of overtime to give the Canadiens a 5-4 victory over the Winnipeg Jets on Saturday.
0
Nov 4, 2017 11:41 PM By: Canadian Press 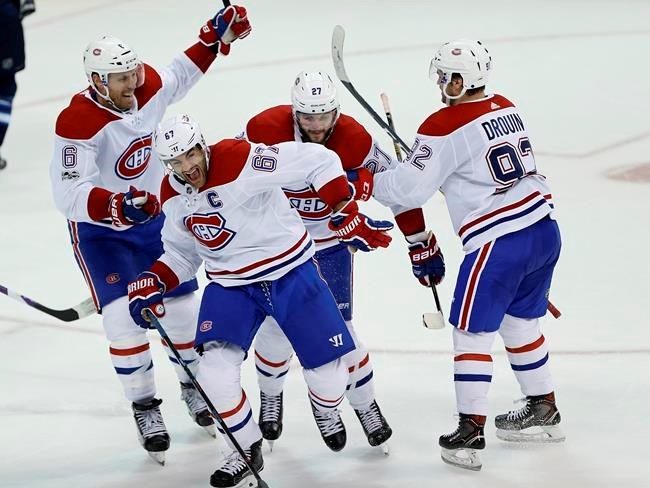 WINNIPEG — Max Pacioretty was glad the Montreal Canadiens didn't get down on themselves this time.

The captain scored a power-play goal at 3:07 of overtime to give the Canadiens a 5-4 victory over the Winnipeg Jets on Saturday.

"From past experience just this year, too many times we maybe felt sorry for ourselves, felt like there was nothing we could do," Pacioretty said of the team's reaction to being down in games.

This night, though, he felt the "energy on the bench" and the support his teammates were giving each other.

"There were some shifts there I thought we tired out their top guys, and that goes a long way and gives you a chance to come back in the game," he said. "I really felt the emotion and the confidence and the resiliency."

The Canadiens got the man advantage in overtime after Jets defenceman Tyler Myers cross-checked Canadiens forward Alex Galchenyuk at 1:54.

Jets defenceman Toby Enstrom lost the puck battle behind the net to Shea Weber, tried to prevent Alex Galchenyuk from passing the puck to Pacioretty in front, but he couldn't and Pacioretty scored on his team's 50th shot of the game.

It was his fifth goal of the season, plus he added two assists. Andrew Shaw also scored twice on the power play for the Canadiens (5-8-1) and Weber had a pair of helpers.

Al Montoya started in goal for injured Carey Price and stopped 19-of-23 shots.

Winnipeg (4-0-3) has earned a point in seven straight games.

The teams were tied 2-2 heading into the third period when Nikolaj Ehlers and Blake Wheeler scored back-to-back power-play goals 2 minutes and 14 seconds apart to give the Jets a 4-2 lead at 6:39.

"They have a smaller team, but they're incredibly quick," said Wheeler, who has nine points in four games. "They're on every puck. They're a desperate group over there trying to get their season turned around. We knew it was going to be that type of game."

Winnipeg was 3 for 3 with the man advantage and Montreal 3 for 6.

"He played a hell of a game, got us a point," Jets head coach Paul Maurice said. "He's played real strong, but tonight he was especially good in a difficult game to play goal because there was nothing clean or easy in front of the net. He was outstanding."

The game was tied 1-1 after the first period and 2-2 following the second. Montreal had outshot the Jets 33-12 after two periods.

"He's been one of those goaltenders that what he can see he stops, and the only way we ever had a chance against this guy was to get some net-front traffic," Julien said. "That was what we discussed about before the game."

Winnipeg heads out for a three-game road trip starting in Dallas on Monday. The Canadiens have a quick turnaround and play in Chicago Sunday.

Julien said he's not sure if Montoya will start against the Blackhawks or it might be Charlie Lindgren.