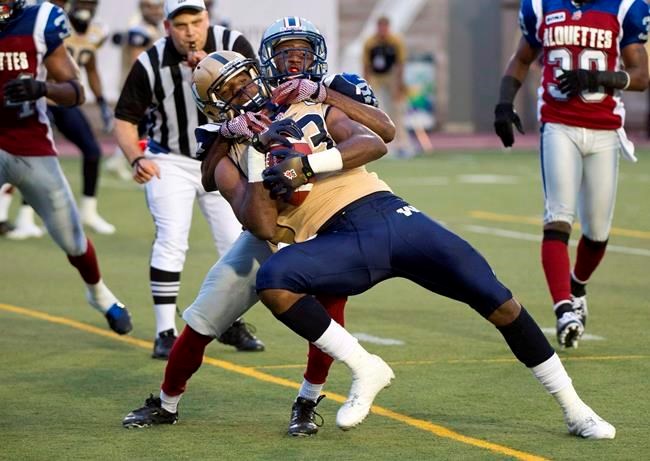 The six-foot-five veteran gives quarterback Matt Nichols a big target as Winnipeg (1-0) plays its home-opener against an Edmonton Eskimos (2-0) squad that features a red-hot, sack-happy defence.

"Well, you're hoping to see 10 touchdowns, but I don't know if that's gonna happen," O'Shea said with a smile, when asked what Matthews might show.

Matthews began his career with Winnipeg in 2012 and was the CFL's rookie of the year. After leaving to play in the NFL for four seasons, he signed with the Calgary Stampeders for their stretch run to the Grey Cup title last season.

Winnipeg signed him to a three-year contract, but he only practised five times at the start of training camp and then suffered a lower-body injury.

He missed the Bombers' season-opening win against B.C., but is now healthy after the club just had its first bye week. He's excited to show fans his skillset.

Having the tall, sure-handed Matthews as a target to complement six-foot-two receiver Darvin Adams should boost Winnipeg's offensive options as the Eskimos are expected to bring a lot of pressure.

The Eskimos' offence is fronted now by quarterback Trevor Harris, who came over from Ottawa in free agency along with receiver Greg Ellingson. The pivot is enjoying early success with a team that's tailored the offence around his talents such as his quick release.

"They've done a good job of catering things to our strengths and doing the things that we're all good at," Harris said. "That includes the receivers and that includes the (offensive) line."

"They've got some good guys up front and in the linebacking corps," Couture, a fourth-year player, said of the visitors. "They did play very aggressively. They've got a handful of different looks that put people in some different spots.

"Like every week, it's going to come down to communication up front and deciphering what they're trying to bring and what we've seen on film and just go from there."

Edmonton linebacker Larry Dean said the defence's performance against the Lions was impressive, but there's room for improvement.

"It's never as bad or as good as you think it is," said Dean, a former Hamilton Tiger-Cat who Edmonton scooped up in free agency. "So even though there were seven sacks, there were also things we went back and saw on film that could have been corrected or that we could have done better."

Nichols is prepared to deal with whatever comes his way.

"They're a big, physical football team that plays hard, especially on the defensive side," he said. "You never see them take a play off. They're all playing full-tempo to the whistle and so you know going in you've got to match that. That's the type of games we like to play.

"It's going to be a physical one, with punches back and forth for four quarters and I'm sure it will come down to the last few minutes."

REST PAYS OFF: Winnipeg is coming off its first bye week of the season. In games after its previous five bye weeks, the club is 5-0.

TOP GUNS: Edmonton leads the CFL in both net offence and net defence, averaging 508 yards for and 221 yards against through its first two games.

PUTTING UP THE POINTS: Since 1992, the Eskimos have only scored 30 or more points in their first two games of the season twice – this year and 2016.