DENVER — A wide-open Cale Makar screamed toward Nathan MacKinnon to deliver him the puck. That made an instant impression with MacKinnon on a night when Makar made an immediate impact.
0
Apr 16, 2019 2:20 AM By: Canadian Press 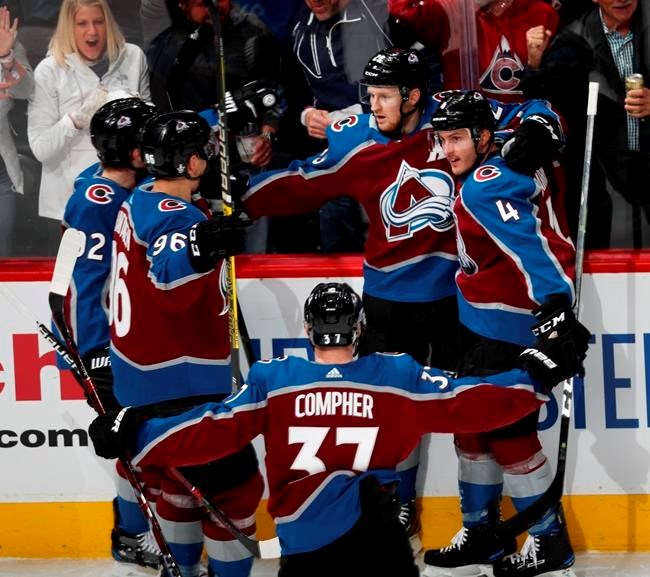 DENVER — A wide-open Cale Makar screamed toward Nathan MacKinnon to deliver him the puck.

That made an instant impression with MacKinnon on a night when Makar made an immediate impact. This newly signed rookie isn't intimidated by the stage or his surroundings.

MacKinnon scored twice in the first period and set up Makar's first NHL goal in his debut as the Colorado Avalanche routed the Calgary Flames 6-2 on Monday to take a 2-1 lead in their first-round playoff series.

"It's pretty weird. Pretty special, though," Makar said of his first game. "Obviously, it's a cool moment."

Matt Nieto added a short-handed goal, and Mikko Rantanen and Erik Johnson also scored for the wild-card Avalanche, who built a 6-1 lead early in the third period and finished with 56 shots. Philipp Grubauer was credited with 27 saves.

MacKinnon had two power-play goals. But the goal of the night was turned in by Makar, the 20-year-old who was signed Sunday and jumped into Colorado's lineup two days after his college season ended when Massachusetts lost in the Frozen Four championship game.

Makar, who grew up a Flames fan in Calgary, was the fourth overall pick by the Avalanche in 2017.

It didn't take long for Makar to make a big contribution as he took a drop pass from MacKinnon, fought off a Flames defender and beat goalie Mike Smith with a wrist shot — on his first NHL shot on net, too. Makar was immediately mobbed by teammates as his parents celebrated in the stands.

"I heard him, too. He was calling for it," MacKinnon said. "First game ever and he screamed at me. That's great. You want a player to be aggressive, assertive, and I was really impressed by that."

Sam Bennett and TJ Brodie scored for the Flames, the top seed in the Western Conference.

Game 4 is Wednesday night in Denver.

"We've got to regroup here, and stick together as a team," Calgary Mark Giordano said. "There wasn't much good, honestly, throughout the night. We made that team look and feel good all night."

There was talk of pulling Smith after the second period, just to save some energy. He didn't want to surrender the net.

"As a goalie in this league, you want to battle no matter how many goals have gone in," Smith said.

Things got physical in the third period with the game out of hand. First, Bennett was given a misconduct penalty for a fight with Matt Calvert. Later, Matthew Tkachuk received a misconduct penalty for mixing it up with Avalanche captain Gabriel Landeskog, who had a cut under his eye. Finally, Garnet Hathaway and Nikita Zadorov were sent to the dressing room for their skirmish.

"I thought it got away from us early and obviously we chased the game the rest of the game," Flames coach Bill Peters said.

The first period was a debacle for Calgary in falling behind 3-0. The team took two penalties on one play — hooking and too many men — to give Colorado an early 5-on-3 power play. MacKinnon sent in a high wrist shot over Smith.

Later in the first, the Flames were called for another penalty and MacKinnon added another power-play goal.

Still, it might be MacKinnon's pass that is best remembered. He set up Makar at 16:02 of the first period. The NHL communications department said on Twitter that Makar became the seventh player in NHL history and first to make his debut in the Stanley Cup playoffs and score a goal.

Wearing No. 8, Makar jumped on the ice early in the game and was given a loud cheer by the capacity crowd. About the only hiccup was in the second period when he lost control of the puck with no one around near his own goal. But he gained control just before it hit the post, with Grubauer looking back.

It's certainly been a whirlwind week for Makar: He won the Hobey Baker Award on Friday as college hockey's top player before losing to Minnesota Duluth on Saturday in the title game. He signed a three-year deal with Colorado on Sunday and arrived in town later that night.

Now, he's donning an Avs sweater against the team he grew up rooting for. He practiced with Colorado for the first time Monday morning.

While in college, he caught his fair share of Avalanche games.

"When I wasn't doing homework and other stuff," Makar said. "I like the way they play. They're very fast."

NOTES: Tkachuk slid into the boards in the second period and lost a blade on his skate. ... Avalanche D Samuel Girard was out with an upper-body injury. ... Avalanche D Ian Cole had two assists. ... The 56 shots were the most by Colorado in a playoff game since June 10, 1996, at Florida. That total was also 56, in Game 4 of the Stanley Cup Final.

Calgary will try to tie the series in Game 4 on Wednesday night in Denver.