OTTAWA — Maxime Lagace was relieved to pick up his first NHL career victory after allowing 11 goals in his first three appearances.
0
Nov 4, 2017 6:29 PM By: Canadian Press 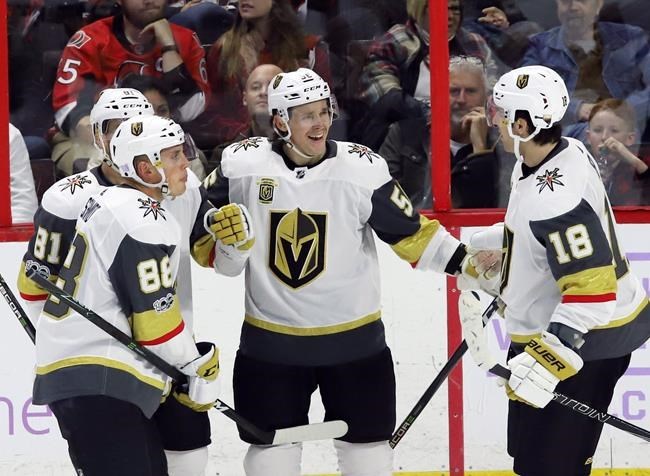 OTTAWA — Maxime Lagace was relieved to pick up his first NHL career victory after allowing 11 goals in his first three appearances.

The 24-year-old goalie made 24 saves for the Vegas Golden Knights Saturday afternoon in a 5-4 win over the Ottawa Senators.

"It's good to have the first one finally," said Lagace. "The guys played really well so I have them to thank for that win."

The game was all the more special as Lagace's parents and other family members were in attendance.

Lagace is the fourth goalie to play for the Golden Knights this season as the previous three went down with various injuries. But somehow the team continues to find ways to remain competitive.

"They didn't surprise us, they played a well structured game and did the things they needed to do to be successful," said Senators captain Erik Karlsson. "We couldn't find a way to break their pattern and find our own way to be successful for long enough."

This was the Senators' final home game before heading out Monday for a week-long trip overseas to Sweden where they will play two games against the Colorado Avalanche.

The penalty kill failed the Senators on this day as it gave up three goals and a fourth was scored seconds after a power play expired.

"They got some bounces on their power play that made us pay and once we got going towards the end it was too late," said Burrows. "They work extremely hard, they never give up and give a second and third effort all the time."

Leading 3-2 to start the third, the Golden Knights created some breathing room as William Karlsson scored a wraparound goal and Haula had a power-play goal to make it 5-2 by the six-minute mark.

Dzingel's fifth of the season for Ottawa made it 5-3 before Erik Karlsson's first of the year in the final minute of play closed the gap to one.

Trailing 1-0, the Senators tied the game 1-1 in the opening seconds of the second as Stone re-directed a Mike Hoffman shot for his team-leading ninth goal of the season.

Vegas regained the lead as Haula took advantage of a juicy rebound, but Ottawa tied things back up at the seven-minute mark as Burrows, with his 400th career point, beat Lagace from in close.

The Golden Knights made it 3-2 late in the second with the second of three power-play goals of the game.

The Senators expected a solid effort from Vegas and gave them full credit for its performance.

"They are the hardest working team in the league," said Ottawa coach Guy Boucher. "That's how they win. They're relentless. They have four lines of guys who work hard and if you don't have four lines and six D that are working as hard then sooner or later they're going to hurt you."

Notes: News reports Friday night had a three-way deal between the Senators, Nashville and Colorado breaking down. The deal would have included Ottawa C Kyle Turris being traded to Nashville and the Senators acquiring Matt Duchene from Colorado. Turris is set to become a free agent at the end of the season and so far the Senators and Turris have been unable to reach a contract extension. ... Ottawa's Zack Smith left the game midway through the third and his status is questionable for Sweden. ... Sens D Mark Borowiecki missed his third straight game due to illness. D Ben Harpur was a healthy scratch. Vegas D Jon Merrill, D Brad Hunt and LW Brendan Leipsic were healthy scratches.