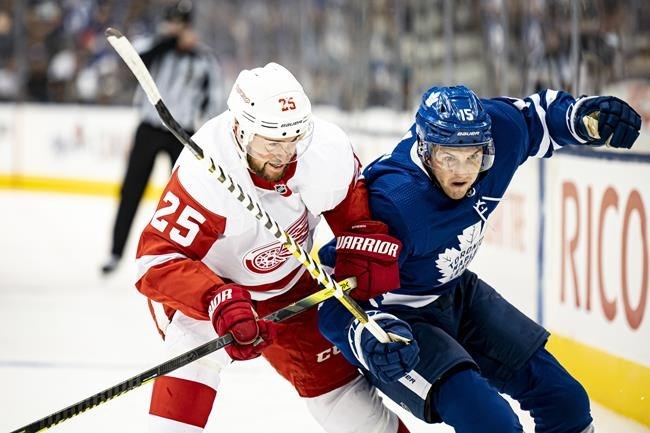 After learning his Maple Leafs would be minus injured captain and star centre John Tavares for at least two weeks — and possibly longer — Toronto's head coach had plenty to think about his line combinations.

He also, not surprisingly, received lots of help.

"I got everybody's input and they all sent (their thoughts) to me," Babcock said of the decision-making process. "And everyone had a different theory."

The Leafs could have promoted veteran centre Jason Spezza from the press box to the second unit between Mitch Marner and rookie Ilya Mikheyev, moved William Nylander off Auston Matthews' wing and into the middle, or even put his entire forward group into a blender.

Babcock instead went with what appeared to be the obvious choice: handing the job, at least for Saturday night's visit from the Boston Bruins, to Alexander Kerfoot.

"We walked through all the options and why," Babcock said after Friday's practice. "Nothing's set in stone."

Tavares suffered a broken finger late in Wednesday's 4-3 loss to the Capitals in Washington after getting struck in the hand by a friendly-fire shot from Leafs defenceman Morgan Rielly. The 29-year-old actually scored his third goal of the season following the injury, but Toronto will be without its leader for at least the next six games.

"It didn't feel like it was too bad waking up (Thursday)," Tavares said. "I was a little surprised by the circumstances, but it could be a lot worse.

It also swings the door open for some of his teammates.

Acquired from the Colorado Avalanche with defenceman Tyson Barrie in this summer's Nazem Kadri trade, Kerfoot has two goals and four points in his eight games with Toronto as the team's third-line centre.

Moving into the Leafs' top-6 alongside Marner and Mikheyev is, however, a much bigger challenge.

"I don't think anybody's going to replace J.T.," Kerfoot said. "We've got to do it as a collective group."

Quiet off the ice, the 25-year-old has made an early impression in Toronto because of his willingness to go into dirty areas.

"He's gotten really comfortable," Matthews said. "He's been a good addition to our team — a guy everybody really enjoys having around."

"Kerf's a way better player than we expected," Babcock added. "He's way grittier. He's got more grease to him. We think he's going to make way more plays as time goes on."

Kerfoot, who had a brief chat with Babcock right before Friday's practice, said he can't afford to change his approach.

"Marns is one of the best players in the league," Kerfoot said. "When you get the opportunity to play with him, you know there's more responsibility and you've got to do a good job."

Also getting a shot to stake a claim is Spezza, who skated with Kasperi Kapanen and Trevor Moore as part of Toronto's new third line.

The 36-year-old has been a healthy scratch for five of Toronto's eight outings after signing for the league minimum in free agency, but he sees an overall silver lining with Tavares out of action.

"It's difficult when you lose your top guy that you rely on for a lot of things," said Spezza, who has mostly been limited to fourth-line minutes when suited up. "It gives different guys opportunities and puts pressure on guys.

"If you can keep winning when you go through injuries, it just builds the belief in your squad."

The game against the Bruins might only be a Saturday in October, but after Toronto suffered a seven-game defeat to Boston in the first of playoffs for the second time in as many years back in April, it should also serve as an early measuring stick.

"They've eliminated us two years in a row," Babcock said. "So you know them pretty good."

While both post-season losses stung the Leafs, the most recent series was especially painful.

Without their captain and his ability to chew up big minutes against other teams' best players, the line of Matthews, Nylander and Andreas Johnsson should see a lot of Patrice Bergeron, Brad Marchand and David Pastrnak at Scotiabank Arena.

The trio has scored 14 of the Bruins' 19 goals in 2019-20, with Pastrnak finding the back of the net six times in the last two games to sit tied for the NHL lead with eight heading into Friday's action.

"Probably the top line in the league," said Matthews, whose team was just 1-3-0 against Boston last season. "It's usually a pretty intense game, a pretty physical game.

"We've just got to make sure we're ready to go."

Only this time, it will be without Tavares.

Emergency goalie David Ayres helps Hurricanes pick up improbable win over Leafs
Feb 23, 2020 2:02 AM
Comments
We welcome your feedback and encourage you to share your thoughts on this story. We ask that you be respectful of others and their points of view, refrain from personal attacks and stay on topic. To learn about our commenting policies and how we moderate, please read our Community Guidelines.