Team Jennifer Jones will have familiar players on its front end when the rink makes its World Cup debut at the Grand Final this May.
0
Mar 14, 2019 4:36 PM By: Canadian Press 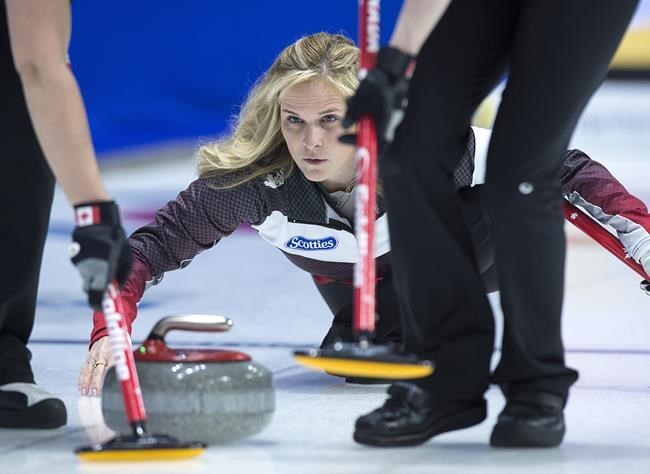 Team Jennifer Jones will have familiar players on its front end when the rink makes its World Cup debut at the Grand Final this May.

Longtime Jones second Jill Officer will return to the lineup and Shannon Birchard, who helped Jones win a national title last year, is also on board for the one-off assignment. They will join Jones and third Kaitlyn Lawes as the Canadian replacements for Team Rachel Homan in Beijing.

Officer, who stepped back from competitive curling this season, has served as an alternate on occasion while Birchard regularly plays second on Team Kerri Einarson.

"We know each other quite well and we enjoy playing together," Jones said Thursday. "I think it's going to be a ton of fun and I don't think there will be any adjustments at all."

Homan's Ottawa-based team won the season-opening World Cup in Suzhou, China last September. But the rink is unable to play the circuit's fourth and final leg because Homan and second Joanne Courtney are pregnant. Homan is due in mid-June, about a month before Courtney.

Jones was tabbed to play the World Cup's third leg in late January in Sweden but instead opted to play at a skins game in Banff, Alta. The Winnipeg skip did play in Beijing last October, finishing third at the China Open.

Team Jones second Jocelyn Peterman and lead Dawn McEwen could not commit to the Grand Final due to schedule conflicts.

In a World Cup news release, Officer was tabbed to play lead with Birchard at second. But Jones said the team will likely finalize position plans after they arrive in China and get some practice time together.

Lawes had to skip last year's Scotties Tournament of Hearts in Penticton, B.C., as she was representing Canada in mixed doubles at the Pyeongchang Olympics. Birchard filled the vacancy and returned as an alternate at the world championship.

"She fit really well into our team immediately at the Scotties," Jones said. "I just think she's a great person so we're excited to be able to spend some time with her over in China and see if we can win a few games."

Birchard skipped her own team last season before moving to second with Einarson this season. Their team also includes third Val Sweeting and lead Briane Meilleur.

Birchard got some reps on the Jones team at the 2018 Canadian Open before playing third at the Scotties. Jones topped Einarson's Team Wild Card 8-6 in the final.

"It was a pretty memorable experience and something I'll never forget," Birchard said. "It really opened my eyes to that kind of level of competition. They really taught me a lot. I've taken a lot of what I've learned into this year as well."

Officer was an alternate for Jones last month at the 2019 Scotties in Sydney, N.S.

She will serve as a fifth for the Canadian team skipped by Chelsea Carey at the world women's championship starting Saturday in Silkeborg, Denmark.

The complete women's field for the Grand Final has not yet been finalized. Team Kevin Koe will represent Canada in the men's competition.