Joe Thornton on decision to sign with Maple Leafs: 'This team is ready to win now'

TORONTO — Joe Thornton had plenty of conversations concerning the next, and perhaps final, step in his illustrious NHL career.
Oct 18, 2020 5:23 PM By: Canadian Press 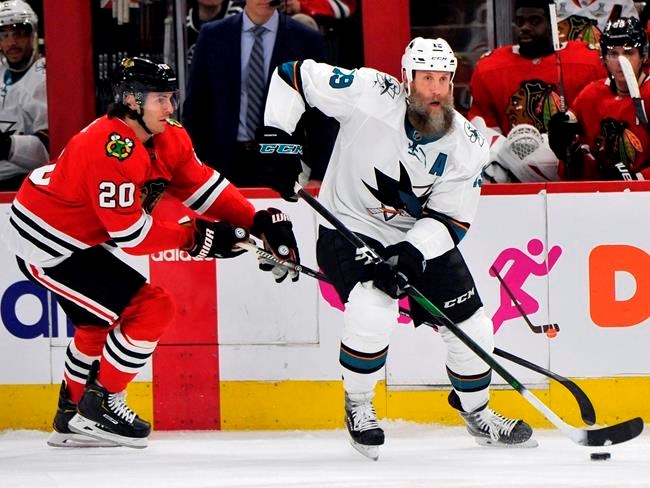 TORONTO — Joe Thornton had plenty of conversations concerning the next, and perhaps final, step in his illustrious NHL career.

The 41-year-old picked the brains of former teammates Patrick Marleau and Joe Pavelski, asking them both to look back and analyze their moves away from the San Jose Sharks.

One phone call, however, that had little to do with hockey stuck with Thornton before he ultimately decided to sign with the Toronto Maple Leafs in free agency — a chat with Joe Montana.

The four-time Super Bowl champion and Hall of Fame quarterback has some experience when it comes to leaving the Bay Area following his trade from the San Francisco 49ers to the Kansas City Chiefs in 1993.

"That conversation meant (a lot)," Thornton said Sunday on a video conference call. "I had a chance to talk to some great people, but he's one guy that offered me up some good advice."

Thornton inked a one-year contract for the league minimum of $700,000 on Friday, joining a list of veterans coming under the Leafs' tent in free agency that already included winger Wayne Simmonds, defenceman T.J. Brodie and fellow blue-liner Zach Bogosian as the team looks to complement a young, talented core that hasn't come close to reaching its potential.

"Probably the hardest hockey decision I've ever had to make," Thornton said of leaving San Jose after 15 seasons. "But I truly believe Toronto, with the with the roster they have, with the guys they picked up this off-season, this team is ready to win now.

Leafs general manager Kyle Dubas expects Thornton's impact to be felt on and off the ice as a teammate and mentor to Auston Matthews, Mitch Marner and William Nylander, and as leadership support for captain John Tavares.

"A good fit in terms of the skillset that has made him into one of the best players of his generation and still allows him to be a successful and effective player," Dubas said of the rationale behind the move. "What he's going to bring to the locker room in terms of his attitude and his mindset each day, especially as we're continuing to grow as a group, that'll be a very important addition to us and something we've tried to focus on."

The Leafs are coming off an up-and-down season that saw Sheldon Keefe replace Mike Babcock as head coach in November. Toronto was in a playoff spot when the NHL shuttered operations in March due to the novel coronavirus, but fell to Columbus in the qualifiers during the summer restart.

That disappointment came on the heels of back-to-back Game 7 losses to Boston in the opening round of the playoffs, leading to questions about the roster's ability to succeed in pressure situations.

"This is a really, really good team," Thornton said. "I think it's gonna be a great team at the end of this."

The native of St. Thomas, Ont., about 200 kilometres southwest of Toronto, added playing close to home was part of his decision, but a chance at glory trumped all.

"I need to win a Stanley Cup," said Thornton, who is currently suiting up for HC Davos in Switzerland, where he keeps a residence. "I really like (the Leafs), love the organization ... it was a little bit (about) family, but mostly hockey."

Jason Spezza, 37, signed on for a second season with his hometown team for the league minimum, while Simmonds, 32, is also a Toronto native. Thornton, Spezza, Simmonds and Bogosian, who are set to make a combined $3.9 million, have all been added at a deep discount.

"We told (Thornton) this is what we have to offer," Dubas said. "We were just very blunt about what the opportunity would look like, where we're at as a team, where we want to go and how we're going to do it.

"We're thrilled he decided to join us."

Thornton will become the first player to wear No. 97 for the Leafs — he's sported it internationally and at all-star games — after declining Spezza's offer of No. 19.

Originally selected first overall by Boston at the 1997 draft — two years before Keefe was picked and three months before Matthews was born — Thornton was traded to San Jose during the 2005-06 season and would capture both the Art Ross Trophy as the NHL's leading scorer and the Hart Trophy as league MVP that spring.

The Sharks wanted him back for a 16th campaign, but with it looking like San Jose will be in tough to make the playoffs whenever the 2020-21 season begins, GM Doug Wilson said he "truly" respected Thornton's choice.

"It's hard to put into words the impact that Joe had on our franchise," Wilson said. "There's probably very few players in all sports that can alter a franchise the way he has."

Long before that, Thornton starred for the Ontario Hockey League's Sault Ste. Marie Greyhounds — the team Dubas supported before joining the organization as a stick boy at age 11, the season after Thornton left.

"Just a dominant player," recalled the 34-year-old Dubas, who would eventually rise to GM of the Greyhounds. "Whenever players come through the Soo, I always study their career and watch their career and cheer for them.

"It's great that we're able to kind of bring it back together."

Now set to head into his 23rd season, Thornton is thankful for the opportunity and willing to do whatever he can to help his new team reach its ultimate goal, one he desperately shares.

"I've got lots of hockey left," said the future Hall of Famer. "Having a chance to go to Toronto, play in Toronto, have a chance to win the Stanley Cup in Toronto ... it's special."

This report by The Canadian Press was first published Oct. 18, 2020.