Jets bounce back with 6-3 win over Blues

ST. LOUIS — Kyle Connor and the Winnipeg Jets got back on track by sticking to the same way they wanted to play all along. Connor scored twice, Patrik Laine had a goal and an assist, and the Jets beat the St.
0
Apr 14, 2019 11:47 PM By: Canadian Press 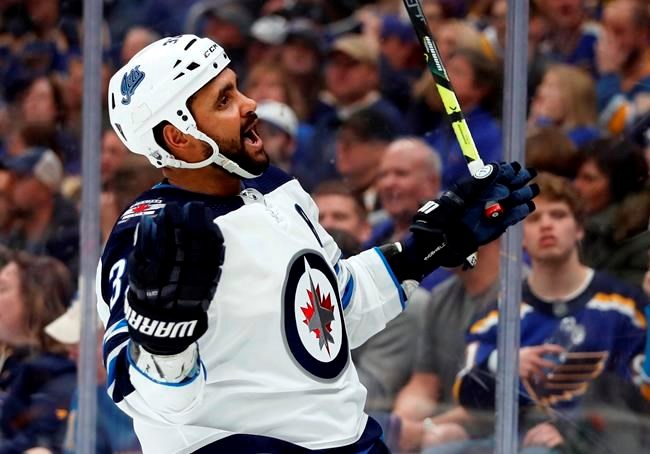 ST. LOUIS — Kyle Connor and the Winnipeg Jets got back on track by sticking to the same way they wanted to play all along.

Connor scored twice, Patrik Laine had a goal and an assist, and the Jets beat the St. Louis Blues 6-3 on Sunday night to climb back into their first-round playoff series.

Winnipeg dropped the first two games at home. But they were one-goal games, and Connor felt the Jets just needed a few minor tweaks.

"As a whole, we played the right way for (the first) two games," Connor said. "Tonight, it was nice to have everyone contribute."

Game 4 of the best-of-seven series is Tuesday night in St. Louis.

"We're building every shift, every game throughout the series," Connor said. "We're getting close to our game and it's pretty dangerous."

David Perron, Vladimir Tarasenko and Alexander Steen scored for the Blues, and Jordan Binnington made 23 stops.

Perron put St. Louis in front with a power-play goal late in the first period. He whipped a shot past Hellebuyck from the slot.

But the Jets grabbed the lead for good when they scored three times in a span of 4:01 in the second.

Hayes started the blitz with a shot from the point that went through traffic before slipping past Binnington. Laine then scored his third goal of the series, converting a pass from Jacob Trouba.

Connor capped the blitz with a power-play wrist shot from the faceoff dot at 8:58. He added an insurance goal 14:44 into the final period.

St. Louis had a chance in the third, pulling within one when Tarasenko scored a power-play goal just 1:51 into the period. But Tanev and Byfuglien responded for Winnipeg, running its lead back out to 5-2 with 11:54 left.

"Tonight was not really our team, obviously," Perron said "We weren't happy with our effort. We didn't play a good game. But we've got to give them credit."

Laine, who had 30 goals and 20 assists in the regular season, has scored in all three playoff games. He had just one goal in his last 19 regular-season games.

"We just stayed within our game and tried to play it simple," Laine said. "We got going and just tried to keep our foot on the gas the whole 60 (minutes)."

Hellebuyck made a big stop on Pat Maroon just seconds before Tanev's goal.

Binnington made a trio of saves in the opening 5:45 to keep the game scoreless. He denied Bryan Little, Hayes, and Mathieu Perrault. Binnington stopped 50 of 54 shots over the first two games.

"The biggest thing is we didn't play our game tonight," Tarasenko said. "It was not our best game out there. It's on us, and we'll handle it tomorrow."

NOTES: Blues D Robert Bortuzzo suffered a cut on his hand that required seven stitches in the third period of Game 2, but played on Sunday. ... Winnipeg is 1-10 in playoff games decided by one goal, including a 1-4 mark last season. ... The Blues failed on their first seven power-play attempts in the series prior to Perron's first-period goal. ... The Jets were the last team in the playoffs to record a third-period goal.

Game 4 of the series is set for Tuesday night in St. Louis.