VANCOUVER — The Vancouver Whitecaps took down the top team in the league on Wednesday, but coach Marc Dos Santos says the victory is just another step in the team's process.
0
Apr 18, 2019 1:57 AM By: Canadian Press 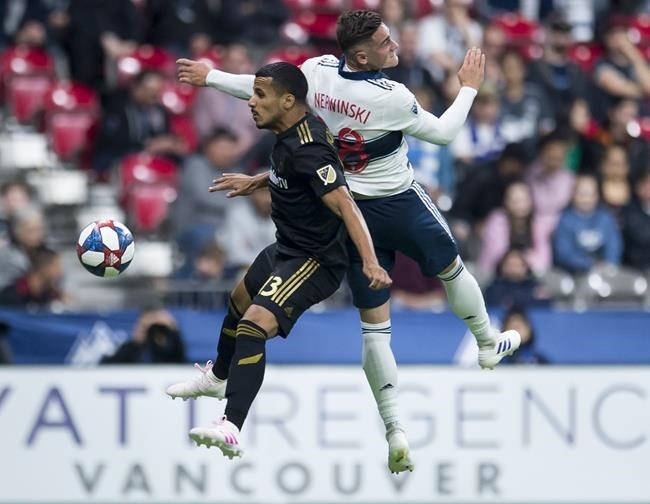 VANCOUVER — The Vancouver Whitecaps took down the top team in the league on Wednesday, but coach Marc Dos Santos says the victory is just another step in the team's process.

The goal came in the 27th minute after Vancouver winger Victory Giro popped a shot off the post. The rebound ricocheted to Hwang and the 22-year-old South Korean took a quick shot, sailing a low ball past L.A. 'keeper Tyler Miller.

"When (Giro) shot it, I thought it was going in. But when the ball was going, I was like, 'Oh, it might hit the post.' So I was going for the second ball. And luckily it came to me, shot, goal," Hwang said through a translator after the game. "It was a great moment."

The young designated player admitted that he'd been feeling some pressure to produce offensively. He spoke with Dos Santos earlier this week and Hwang said the coach told him to just be himself on the field.

Hwang is still developing as a player and he can't carry the same pressure that marquee players that L.A. Galaxy's Zlatan Ibrahimovic or D.C. United's Wayne Rooney have, Dos Santos said on Wednesday.

"He cannot play with the pressure that he has to carry the Whitecaps on his back. Because he cannot do that alone," the coach said. "He's an important player for the roster, he needs to play with freedom, to play in his role, and if he focuses on that, the team's going to get better and he's going to get better."

The Whitecaps have already showed steady improvement this season and Wednesday's win was the result of hard work and consistency, Dos Santos said.

"We've been playing some decent football, but never for 90 minutes. It's coming together," he said.

In order to capture a victory on Wednesday, however, Vancouver had to shut down two of the league's hottest scorers. L.A.'s Carlos Vela and Diego Rossi have combined for 14 of the team's 21 goals this season, and lead the MLS in scoring.

Shutting the pair down required communication and cohesion from the 'Caps back end, Henry said.

"I feel like as a unit we defended really well, as a back five," he said. "Individually, that team I guess can kill you. They have quality and they can isolate players one-v-one or get guys in free. That's how they beat you."

Whitecaps goalie Maxime Crepeau had four saves to earn his second clean sheet of the season.

"I thought in the second we did a good job of applying pressure, created some good advantages," he said. "But when we needed to make the right play at the right time, we weren't sharp."

L.A. put up a hard push through the second half, dominating possession and out-shooting the Whitecaps eight-to-five across 45 minutes.

There were some especially tense moments during the six minutes of injury time, Dos Santos said.

"My heart was beating a lot. I'm going to take five hours now to fall asleep," he said.

"But again, you know, the commitment, the fight, the guys together. You felt that the team together said 'There's no way we're not winning this game today.'"

The Whitecaps will be back in action on Saturday when they visit Orlando City SC.