Go ahead and add another title to Serena Williams' collection: Mom. The tennis star announced via social media on Wednesday that she gave birth to a girl named Alexis Olympia Ohanian Jr.
0
Sep 13, 2017 11:41 AM By: Canadian Press 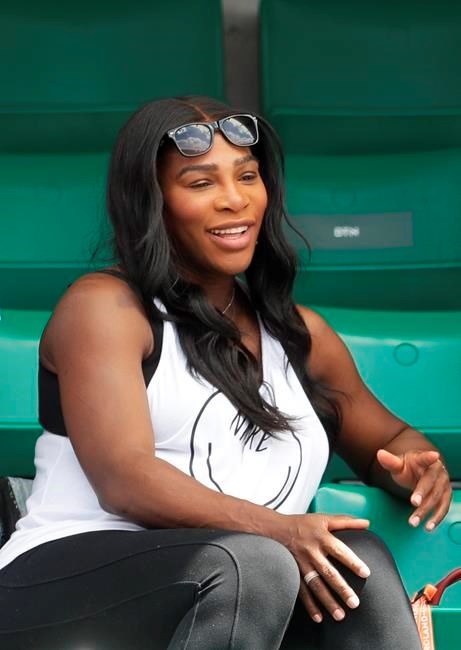 Go ahead and add another title to Serena Williams' collection: Mom.

The tennis star announced via social media on Wednesday that she gave birth to a girl named Alexis Olympia Ohanian Jr.

Williams posted about her baby on Instagram and Twitter accounts and is heard saying in a video, "We had a lot of complications, but look what we've got."

The 35-year-old Williams said in late December that she was engaged to Reddit co-founder Alexis Ohanian.

Williams wrote Wednesday that their daughter was born on Sept. 1 and weighed 6 pounds, 14 ounces. One posting also says about the newborn, "Grand Slam Titles: 1."

Williams won her 23rd Grand Slam singles championship at the Australian Open in January — while she was pregnant.

She has not competed anywhere since but has said she intends to return to competition by next year's Australian Open, which starts on Jan. 15, 4 months after her baby was born.

"If she's ready, she'll play. If she's not, she won't play. I'm not a doctor. I can't decide when she's going to be ready to practice. If we can have enough practice so she can be ready, she'll play," Patrick Mouratoglou, Williams' coach, said last weekend at the U.S. Open.

"I don't want her to go compete if she's not ready," Mouratoglou said. "I told her: 'You come if you're ready.' And I will do everything for her to be ready for Australia. But if she is not ready, of course she won't compete."

There is recent precedent for tennis players to return to action after giving birth.

Kim Clijsters, inducted this year into the International Tennis Hall of Fame, retired to start a family after having won one U.S. Open title, then came back to action in 2009 and won three more Grand Slam trophies. Another former No. 1 and major champion, Victoria Azarenka, returned to the tour this year after having a son, although she missed the U.S. Open because of a custody dispute involving the baby.

Williams' 23 major titles are a record for the professional era, which began in 1968; she broke a tie with Steffi Graf in Australia this year. Only one woman has won more: Margaret Smith Court, who claimed a portion of her 24 during the amateur era.

As word made the rounds during the U.S. Open that Williams had given birth, Garbine Muguruza — the reigning Wimbledon champion who is ranked No. 1 as of Monday — offered up quite a punchline.

When a reporter told her that Williams gave birth to a daughter, Muguruza responded: "Baby girl? Well, I hope she doesn't play tennis."