LAS VEGAS (AP) — Alex Pietrangelo scored his first goal of the postseason to break a tie late in the second period, and the Vegas Golden Knights defeated the Colorado Avalanche 6-3 in Game 6 of their second-round series on Thursday night to advance t
Jun 11, 2021 1:29 AM By: Canadian Press 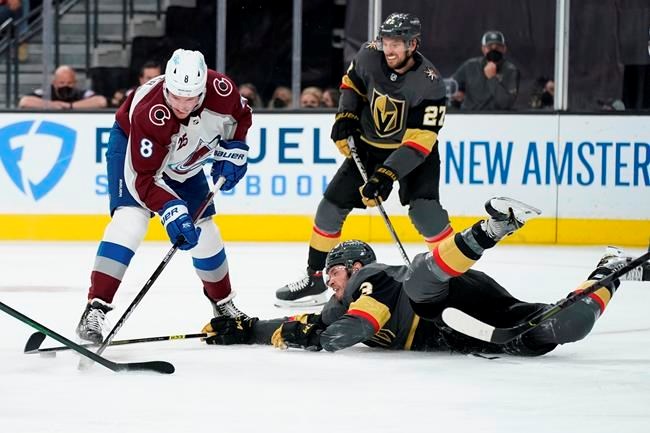 LAS VEGAS (AP) — Alex Pietrangelo scored his first goal of the postseason to break a tie late in the second period, and the Vegas Golden Knights defeated the Colorado Avalanche 6-3 in Game 6 of their second-round series on Thursday night to advance to the Stanley Cup semifinals.

Nick Holden, William Karlsson, Keegan Kolesar, William Carrier, and Max Pacioretty also scored for Vegas, which won four straight in the series and will next face the Montreal Canadiens. The Golden Knights are in NHL's final four for the third time in the franchise's four years.

After firing a team-high 45 shots during the postseason, Pietrangelo’s 46th found the back of the net with 18 seconds left in the second after he gathered a rebound from Alex Tuch’s shot that caromed off the end board, and he sent the puck top shelf to beat Colorado netminder Philipp Grubauer to put Vegas up 4-3.

The third period belonged to Fleury, who stopped 11 shots in the final frame, including a one-timer by Valeri Nichushkin from the bottom of the circle. Fleury lunged across the crease to stymie the attempt with what might have been his biggest save of the game, preserving the 4-3 lead with about 14 minutes left to play and keeping the momentum in Vegas’ favor.

Carrier got his first goal of the postseason as he knocked home a rebound from the doorstep, and Pacioretty added an empty-netter to provide the final margin.

Colorado came out of the opening faceoff looking to silence the sold-out crowd, as the Avalanche took advantage of a turnover by Vegas defenseman Shea Theodore. Colorado speedster Nathan MacKinnon raced into the offensive zone with the puck and fed a streaking Toews, who beat Fleury with a snipe just 23 seconds in.

The crowd was reignited when Holden fired a shot from the point and through Grubauer’s five-hole, tying the game just 52 seconds later.

Later it was Karlsson creating a turnover and finding Martinez across the zone. After winding up for a shot up top, Martinez opted to send the puck back to Karlsson, who snapped a one-timer between Grubauer’s skate and the post for his third goal and seventh point in the series to give Vegas a 2-1 lead.

With Pietrangelo sitting in the penalty box after a delay of game call early in the second period, Rantanen skated across the zone and fired an off-balance wrist shot through the legs of Vegas defenseman Zach Whitecloud and off the inside of his right skate, and off of Fleury’s blocker to tie the game once again.

After winning a faceoff and shuttling the puck to Theodore, Kolesar positioned himself perfectly to redirect Pietrangelo’s shot from the blue line past Grubauer to put Vegas back on top, 3-2.

Colorado tied the game for the third time when former Knight Pierre-Edouard Bellemare sent a cross-ice pass over the red line for Burakovsky, who skated down in on the right wing and lasered a shot by Fleury on the far side.