Under head coach Bobby Smyrniotis, Forge FC has been the class of the Canadian Premier League.
Oct 20, 2020 1:15 PM By: Canadian Press 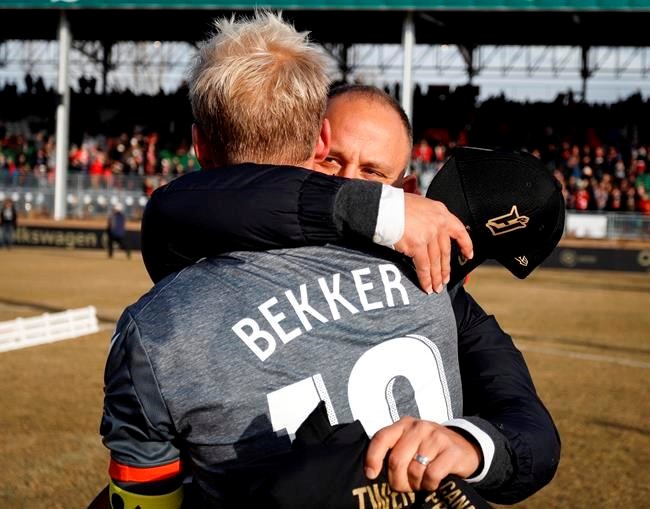 Under head coach Bobby Smyrniotis, Forge FC has been the class of the Canadian Premier League.

The two-time champions from Hamilton look to make their international mark as they open 2020 CONCACAF League play on Thursday in El Salvador against CD Municipal Limeno.

While the CPL is new to the scene, success for Smyrniotis has been more than two decades in making. And he, along with older brother Costa, has played a key role developing and nurturing Canadian soccer talent since founding Sigma FC in 2005 in Mississauga, Ont.

"It starts with a dream. And now we're here," said the 44-year-old Costa Smyrniotis, Forge's director of football.

Toronto FC's Richie Laryea, considered one of the top outside backs in Major League Soccer, joined Sigma at age 11. He counts Bobby Smyrniotis as a key figure in his development.

"Growing up he was one of, I would say, very few coaches that actually knew what they were doing ... He was teaching me things I never even dreamt or thought about," said Laryea, who at 25 still keeps in touch with Smyrniotis. "He definitely took my game to a whole new level and it was really important for me to have him in my development that early in my career."

While the 41-year-old Smyrniotis has helped players improve on the field, he has also made them better people off it.

"He's a great person," Laryea said. "All the guys who have gone through him have nothing but good things to say about him. He was a fatherly figure for all of really, I would say. He kept us all accountable."

Born and bred in Toronto, Smyrniotis grew up in a soccer house. His father, an immigrant from Greece, worked long hours at his steakhouse (the now defunct Muddy York) but loved the game and passed that on to Bobby and Costa.

Bobby played for the East York Soccer Club and then Vaughan Soccer Club.

"Little brother got all the talent ... He got pretty good pretty quick," said Costa Smyrniotis.

Carrying ambitions of a pro career, Bobby Smyrniotis headed to Greece at 16 to go on trial with different clubs.

"I lived it on my own ... Arranging things on my own or through my brother," he said.

"I had the ability to stay at a couple of places but realized it wasn't as luxurious a lifestyle as we all had thought," he added. "I was a very good student and decided maybe the best path is to come back and try out a scholarship."

He started at York University before transferring to the College of Charleston in South Carolina on scholarship. A central midfielder, he had talent but also wonky knees.

At 22, he moved back to Greece to work on a master's degree in sports management through the University of Louisville. It was prior to the 2004 Olympics and the university had set up a campus in Athens.

So he went over there to study, playing a little bit at the same time. He reckons had his body held up, he might have played in Greece as a second-division player.

His life took a turn when one of his classmates, who worked in marketing at famed Greek club Olympiakos, offered to set him with an interview with the club's youth department. Smyrniotis, who had already done some coaching with Vaughan, ended up joining the club as an intern. A few months later, the 23-year-old Smyrniotis had a job.

Olympiakos' youth academy technical director took a liking to him. Smyrniotis spent the next two years learning at the late Sakis Dokas' side.

"I said I was doing two master's degrees at once," Bobby said. "He was my first footballing father and really taught me the right way of how to work in youth football. It was just excellent. It opened my eyes to everything that is good in football and everything that was wrong with football and development back home here."

"He would call me up for a coffee and I would meet him in five minutes. Because the man was just full of information and full of doing it right."

His first day on the job, Smyrniotis had his players do push-ups. Dokas called him into the office and asked him how things went before asking "Tell me about push-ups?"

The message was not to stop doing it, but to always think about how actions affect players mentally and physically.

Dokas also told him later that week not to use a whistle, saying it was for animals. "Communicate with the kids, talk to them, let them learn your voice," was the advice.

"So that was the last day I ever used a whistle on the soccer field," said Smyrniotis.

After Olympiakos restructured, he left the club.

His life took another turn, thanks to an agent he met who was planning a series of camps in Greece with the technical staff from Ajax of Amsterdam. He asked Smyrniotis to help.

He spent a month running the camps, developing ties with the people behind Ajax's famed youth system.

"That just opened up my eyes to a whole different world of football," he said.

In 2005, he moved back to Canada. But the connection to Ajax continued when the Dutch club decided he could help them launch camps in Canada.

Smyrniotis wanted to put what he had learned into his own club situation.

"Because I believed we had players. I just believed we didn't have the structure or the culture in organizations."

He turned to Costa, who was working as a financial analyst on Bay Street.

"I said 'We need to start something. There's good talent here.' ... That's how we got started with Sigma in 2005, through some summer camps and then slowly training programs and them finally into teams."

It wasn't easy. Setting up Sigma took time and everything they had. "The one thing I always said. We're going to do this, we're going to dream big," said Smyrniotis.

Added Costa: "We said at the time ''You take care of the inside the lines and I'll take care of everything outside of the lines.' It was a good fit."

"It didn't take long," said Costa. "Because the one thing about Bobby, he attracts good people to him."

Since getting players to Europe was difficult, they looked to college soccer as a playing opportunity, seeing it as "the best reserve-level football at the time in North America."

Players like Laryea, Cyle Larin, Kwame Awuah and Chris Nanco, who started with Sigma at 10 or 11, were recruited by U.S. colleges after learning their trade under Smyrniotis.

Today, he estimates 14 of his Forge players came through the Sigma ranks.

After getting his UEFA B coaching licence back in 2004, Smyrniotis opted to learn in the field, spending several months a year at Ajax and other European clubs.

He has never stopped networking, building an impressive Rolodex that extends around the world. Last year he finished his UEFA A licence and, during the off-season, spent a week with the Olympiakos first team in training.

"I try and spend as much time in the off-season overseas," he said.

While the pandemic may restrict his travel this time, he has been pondering visiting a friend coaching in Qatar.

Today Sigma turns a training program for some 90 players aged seven to 12. The academy, which features some 150 players, runs all the way through 11 to senior football via League 1 Ontario. The staff numbers about 15.

Players are selected. The youngest don't have to be stars, because Smyrniotis believes players can progress if they have the right mentality and co-ordination.

While Smyrniotis' demeanour is calm and collected, he knows how to make his point.

"He just has a perfect way of reading his players," said Laryea.

"He was definitely friendly and kind and all that to me all the time but when it came down to soccer, he was tough on me," he added. "We had a tough love relationship, kind of like a father and son may have with the father trying to push their son to do something out there ... At the time I didn't really realize why he was doing it. But once I did move on past Sigma, I did realize I really needed what he did for me because that got me ready for the real world and what was to come next for me."

Winning is a byproduct of what they learn at Sigma.

"Bobby's big thing when we were young, it wasn't just winning games," Laryea recalled. "He would actually be quite angry if we won a game 6-0 but didn't necessarily play as well as we should have.

"He would rather us win 1-0 and bring out all the right identities of a game."

Smyrniotis, a father of two, somehow still manages to keep his hand in at Sigma.

'It's not easy but when it's your baby, you've always got time," he said.

This report by The Canadian Press was first published Oct. 20, 2020