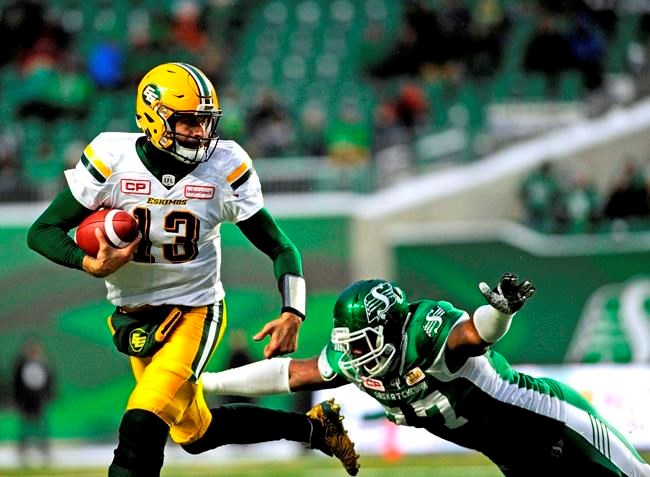 His CFL resume proves it.

On a cold and snowy night in Regina, with turf that felt more like concrete, Reilly shone brightly and led his Edmonton Eskimos to their fifth consecutive win, a 28-13 triumph over the Saskatchewan Roughriders.

"This is what we live for," Reilly said after his three-touchdown performance. "This is why you work all season, all off-season. This is why you leave your family at home and travel and stay up here and do the long-distance thing for a few months. It's 18 weeks plus training camp and pre-season and it all comes down to this time of year. I love it."

Reilly's touchdowns all were of the rushing variety. His second score of the night, early in the fourth quarter, extended a one-point lead to eight at 21-13. On the ensuing kickoff, Edmonton forced a fumble and recovered on Saskatchewan's 27-yard line. Five plays later, Reilly was in the end zone again after a one-yard run.

Reilly rushed for 29 yards, and his 294 passing yards made him the Eskimos' all-time leader in that category.

"When he's playing hot at the end of the year, and there are reasons why is playing hot at this time of year — it's the guys around him as well," explained head coach Jason Maas. "He still has to make the decisions and put the ball where it needs to be and make the checks. He's doing all of that at a very high level right now. He has a lot of confidence."

Edmonton (12-6) will stay in the West Division and travel next week to take on the Winnipeg Blue Bombers in the West semifinal.

The Riders (10-8) will cross over to the East Division to battle the defending Grey Cup champion Ottawa Redblacks in the East semifinal.

Reilly is no stranger to playoff football. He has played at a high level in November before and in 2015 led the Eskimos to a Grey Cup title. He was the MVP of that game.

"Things are never perfect at this time of year," he said. "We're not playing inside of domes, we're not getting great weather, so it's really about who is mentally tough and who can out-scrap the other team."

"It's not a best-of-seven series in the playoffs," Reilly continued. "You get one crack at each team and if you don't come out and get it done in that one game then your season is done. And that can be frustrating, but that's what I love about it, too. You can't take a night off."

The Eskimos enter the CFL playoffs as the league's hottest team. A month ago, there was doubt the team would contend for a post-season berth having lost six straight after a 7-0 start to the season.

But the Eskimos feel they're playing their best football now and will be a tough out.

The Riders have won eight of their last 12 games, but head coach Chris Jones wasn't a fan of his team's final performance in the regular season.

"We were undisciplined, took too many penalties, missed too many assignments," Jones said. "I certainly hope that's not indicative of what we'll do next week."

Brandon Bridge and Marcus Thigpen were bright spots for the Riders. Bridge relieved starter Kevin Glenn and promptly threw a touchdown strike to Thigpen that cut into Edmonton's 11-0 lead in the second quarter.

With running backs Trent Richardson and Cameron Marshall not dressed, Thigpen led Saskatchewan in rushing (32 yards), which included an eight-yard touchdown rush in the third quarter. He also had 31 receiving yards.

CJ Gable rushed for a game-high 70 yards for Edmonton.