Canada's Pellington says response to NCAA tournament has been overwhelming

Four days after a thrilling NCAA women's basketball final, Shaina Pellington had barely made a dent in replying to the countless congratulatory messages. They poured into her phone and her social media feeds despite the loss.
Apr 8, 2021 4:32 PM By: Canadian Press 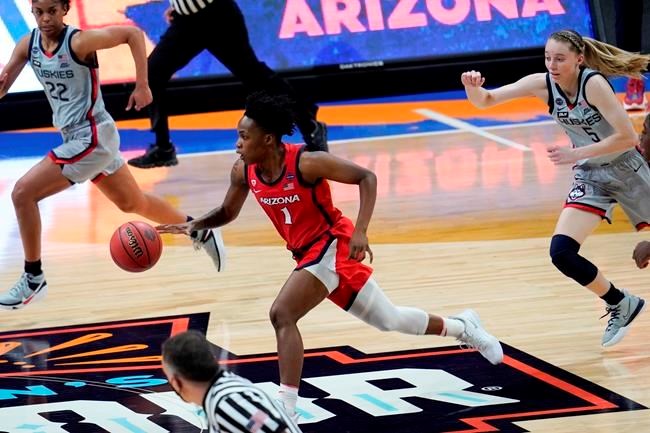 Four days after a thrilling NCAA women's basketball final, Shaina Pellington had barely made a dent in replying to the countless congratulatory messages.

They poured into her phone and her social media feeds despite the loss.

"Too many. Too many," Pellington said with a laugh. "I might have to put out a general (message): 'Thanks guys, I'm going to get back to you.'"

"A lot of people congratulating me and the team, and saying they're proud of us. It's a bittersweet feeling knowing people supported us even though we didn't win."

The 21-year-old guard had 15 points, seven rebounds and three steals in 30 minutes off the bench in the Arizona Wildcats' 54-53 loss to Stanford.

With the sting of a narrow defeat wearing off, the tournament is in ways a big win both for Pellington, who played this season after sitting out 550 days between college appearances, and for women's basketball in general.

Pellington's long layoff was partly because of the months the sport lost to the COVID-19 pandemic, and because she had to sit out a year after transferring from the University of Oklahoma.

She earned conference rookie of the year honours at Oklahoma, but her sophomore season came to a rocky ending amid accusations of mistreatment by coach Sherri Coale -- not just from Pellington, but several former Oklahoma players.

An appearance in this year's final had the sweet feeling of karma for Pellington.

"For sure," she said. "(Coale) would always harp on the (NCAA runner-up team she had in 2002), and how she didn't think she'd ever see a team get that far ever again. All this different stuff. It was just kind of negative.

"Then to be able to do that with another team . . . that was a really surreal moment for me."

Arizona's coach Adia Barnes, meanwhile, was a star of this year's tournament. Social media exploded after her fiery post-game team huddle that included an F-bomb and two middle fingers after her overlooked Wildcats knocked off Connecticut in the semifinals.

Then she famously pumped breast milk for six-month-old daughter Capri during halftime of the final. Pellington said while Barnes delivered her speech, players could hear the whirring pump of the machine.

"That was funny," Pellington said.

"I'm like 'Wow, there's a lot of hats,'" Barnes told reporters last week. "It's the former WNBA (player), it's the Black woman, it's the mom. But it's a privilege for me. You can be great at all these things."

While the NCAA women's tournament was delivering fabulous storylines, it was also shattering viewership records.

"Because of COVID a lot more people are sitting at home, haven't much to do," Pellington said. "People are trying to find things occupy their time with and I feel like basketball during this time was one of the those things that people were really invested in.

"And obviously with all the drama that was happening with the weight room (the paltry women's weight room compared to the men prompted a huge outcry), people were using social media to get the word out. And I feel like yeah, a lot of people were paying attention to that.

"More people were watching this year than ever . . . that's really cool."

"I thought Shaina's athleticism was really showcased in the final," Thomaidis said Thursday. "Her speed and athleticism were on display . . . able to score in the open court when they turned Stanford over, and then also had a few highlight-reel moments on offence in the half-court.

"She competes and has confidence in her abilities, which enables her to shine in the big moments."

Pellington, who played for the Canadian team in Olympic qualifying, hopes her NCAA tournament performance improved her chances to cement a spot in Tokyo.

"But I think even before the tournament, I feel like they have a pretty good sense of what they're going to get from me on the court," the five-foot-eight guard said.

Pellington had to adjust to coming off the bench this season behind Aari McDonald, who's a projected top-five WNBA draft pick after a spectacular tournament.

"I feel like the national team knew that, they kind of expected it was going to be a different situation for me this year," she said.

Pellington has another year at Arizona, and Barnes said next season looks bright.

"Shaina had her best game of the year, she came in today and gave us a spark - played her heart out," the coach said moments after the loss.

"Shaina was phenomenal. Without Shaina playing the way she did, we wouldn't have even come down to last possession. So Aari passing the baton to Shaina . . . we'll have some good players returning."

There were Canadians on each of the women's Final Four teams this season. Alyssa Jerome of Toronto had four rebounds in five minutes for Stanford in the final.