Winning his first ATP Tour title was a significant career milestone. Canada's Denis Shapovalov also drew confidence from the way he did it. The 20-year-old from Richmond Hill, Ont.
0
Oct 21, 2019 2:37 PM By: Canadian Press 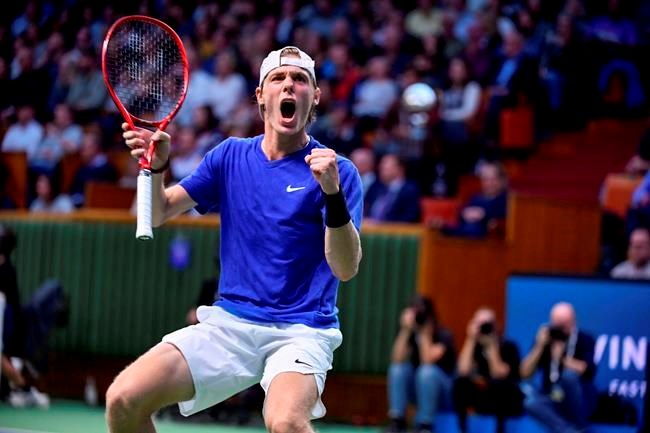 Winning his first ATP Tour title was a significant career milestone. Canada's Denis Shapovalov also drew confidence from the way he did it.

The 20-year-old from Richmond Hill, Ont., says he wasn't tense or afraid to lose when he stepped on court for his first tour final Sunday at the Stockholm Open.

The exhilaration of reaching new tennis territory — and finally slaying the semifinal dragon after going 0-7 — shone through in a straight-sets 6-4, 6-4 win over Serbia's Filip Krajinovic.

"I hadn't really gotten past the point of the semifinals so I wasn't sure how I was going to feel being in the finals for the first time in awhile and the first time in an ATP final," Shapovalov said Monday during a Tennis Canada conference call.

"Not nervous at all to be honest. I was really happy to go out there and show everybody my game and have a chance to kind of celebrate and play in something as special as an ATP final. It was great that I approached it in a really excited way.

"I think it's a really big confidence-booster for me for the future knowing that first of all I have a title under my belt and I can play more relaxed, but also I really get up for these matches and I get really excited."

Shapovalov's victory was the first by a Canadian man since Milos Raonic of Thornhill, Ont., won in Brisbane, Australia, in January 2016.

Shapovalov ascended seven rungs in Monday's world rankings to No. 27, which is his highest position since July 7.

The Canadian joins Montreal's Felix Auger-Aliassime (18) and Raonic (32) in the field of this week's Erste Bank Open in Vienna, Austria.

Shapovalov (pronounced SHAP-oh-VAHL-ahf) meets No. 34 Pablo Carreno Busta of Spain in the first round.

"I feel my form is there mentally," Shapovalov said. "I feel really fresh to play.

"I've got a pretty tough draw this week playing Carreno Busta first round. I lost to him recently, but at the same time I'm feeling pretty confident. Having a win behind your back is always helpful."

The tournament's fourth seed in Stockholm, Shapovalov had the advantage of a first-round bye.

"It gave me a lot of time to prepare for those courts, for the balls there. They're a little bit different," he explained.

"I think my whole game was pretty on. I think I was serving well. I was moving really effectively on those courts. It felt like everything was kind of working for me."

He joins Auger-Aliassime, Raonic and Vasek Pospisil of Vancouver on Canada's roster announced Monday for the inaugural Davis Cup Finals Nov. 18-24 in Madrid.

Canada is in a group with Italy and sixth-seeded United States.

Sidelined from January to June following back surgery on a herniated disk, Pospisil is rounding into form.

The 29-year-old won a Challenger event Sunday in Las Vegas while his countryman Shapovalov prevailed across the Atlantic Ocean.

"I think we've got a very powerful team both in singles and doubles," Shapovalov said. "Any of us can play either event.

"I'm excited to be teamed with these guys. I think we have a great shot of going deep and potentially finishing as one of the top teams."

Canada's best Davis Cup result in the Open era was reaching the World Group semifinals and falling 3-2 to Serbia in 2013.

This year marks the first time the Davis Cup champion will be crowned at a pre-selected, potentially neutral site during a week-long event. Previously, the World Group had ties over the course of a year with best-of-five series played at a home venue.

There are six groups in the 18-team event. The group winners and the next two best teams advance to the quarterfinals.

This report by The Canadian Press was first published Oct. 21, 2019.