Canada must find energy for last chance at RWC vs. Namibia

KOBE, Japan — Canada coach Kingsley Jones isn't worried about his players' hearts. It's their legs that concern him.
Oct 8, 2019 2:26 PM By: Canadian Press 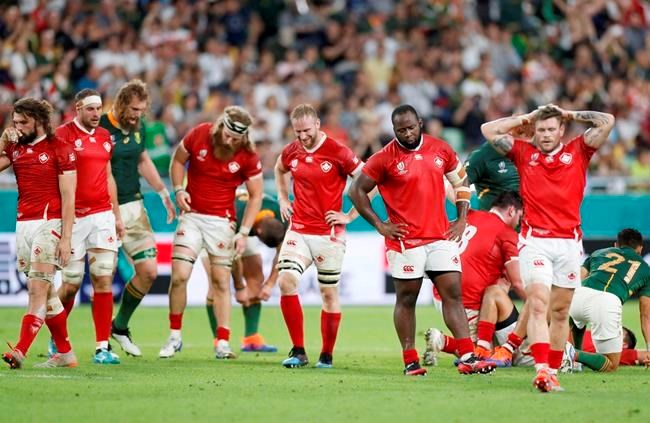 KOBE, Japan — Canada coach Kingsley Jones isn't worried about his players' hearts. It's their legs that concern him.

Canada was walloped 63-0 and 66-7 in successive games against New Zealand and South Africa and must find the energy for one last challenge at the Rugby World Cup.

Canada faces fellow Tier Two team Namibia last in Kamaishi on Sunday and it's one game they should win. Namibia is the only team ranked lower than Canada at the World Cup — albeit by just one place.

Canada has lost three from three so far in Japan but the World Cup will be considered a success if it wins the last one, Jones said.

But the Canadians are drained from back-to-back games against two of the most intense teams in world rugby. And that was exacerbated when Canada played for 45 minutes with one man down against the Springboks on Tuesday in Kobe after replacement lock Josh Larsen was sent off for a shoulder charge on a South African player's neck at a ruck just before halftime.

"We've planned for this game (Namibia) for a long while," Jones said. "There will be a lot of rest and recovery. I think it's going to come down to the legs of the guys on Sunday."

Canada's 14 players held the Springboks to 19 points in the second half after conceding 47 in the first. That takes a toll. Canada made twice as many tackles as the Springboks. And Canada has just four days off to recover before Namibia.

Jones said his players seemed "pretty fit" in the dressing room after the Springboks loss but he'll only really know what shape they're in when they train again in the coming days.

"We'll throw everything we've got at it. Short turnaround but we've got no excuses," he said. "We'll put everything we can into the field next week."

One thing Canada can't prepare for, though, is the possible arrival of Super Typhoon Hagibis, which is predicted to hit Japan over the weekend and could wreak havoc with the Rugby World Cup schedule.

"The first thing you have to learn in my job is to concentrate on the controllables," Jones said. "There's so many uncontrollables."

He let out a little laugh at the suggestion he should also be planning for Hagibis.