MONTREAL — Swiss international Blerim Dzemaili has been with the Montreal Impact for less than a month but he already feels right at home.
Jun 3, 2017 11:13 PM By: Canadian Press 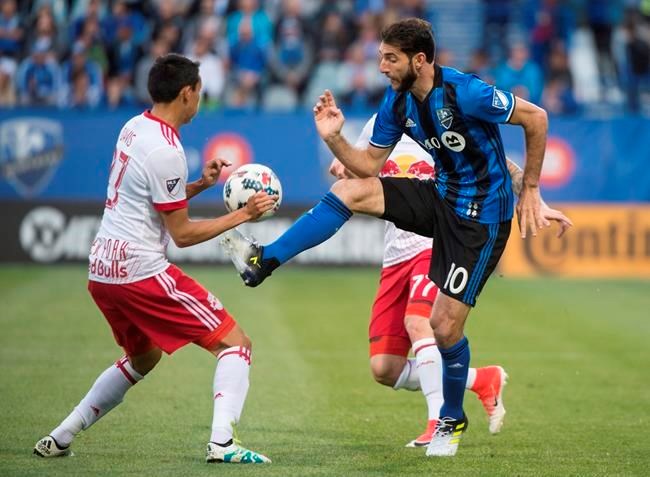 MONTREAL — Swiss international Blerim Dzemaili has been with the Montreal Impact for less than a month but he already feels right at home.

Dzemaili scored his first Major League Soccer goal, and second goal in as many games in all competitions, to give the Montreal Impact a 1-0 victory over the New York Red Bulls on Saturday.

The Impact (4-4-4) have now won back-to-back games in MLS for the first time this season.

Dzemaili, who joined the Impact from Bologna last month, also scored in Montreal's 4-2 victory against Vancouver in the Canadian Championship on Tuesday.

"I feel very comfortable," said Dzemaili, who made his third MLS start on Saturday. "The team gives me a lot of confidence and I try to give that confidence back. I play football because I love it and I just want to have fun. When you play without thinking too much, you automatically play well."

Dzemaili broke the scoreless deadlock in the 67th minute when he finished a clever give-and-go with Ignacio Piatti, firing a right-footed strike past Red Bulls goalkeeper Luis Robles from inside the box.

The midfielder finished with five shots, including two on target.

"He's fitting in nicely in the midfield," said Impact coach Mauro Biello. "He scores a big goal. Good combination with Nacho (Piatti). He's a quality player and he's only getting started. There's a lot of good things coming once he understands the league more and his teammates. He's going to help this team tremendously."

Dzemaili also had a goal disallowed in the first half. The 31-year-old got the 19,032 fans at Saputo Stadium on their feet at the half hour mark with a shot from the edge of the box, but the celebration was short lived.

The referee, who conferred with his linesman after the ball found the back of the net, determined Montreal's Dominic Oduro, who was in an offside position, had obstructed Robles' view when the ball left Dzemaili's foot.

"It looks like he's really starting to get a feel for the league," said Impact goalkeeper Evan Bush of Dzemaili. "A lot of the European guys who come here don't do well with the physicality and it's frustrating because the referees let a lot of things go.

"But he hasn't played at the places he's played and at the level he's played for as long as he's done without being an intelligent guy. He was going to figure it out and it's happened very quickly."

Montreal was the better team for long stretches of the encounter as the Red Bulls were limited to three shots on target.

The Red Bulls (6-7-2) extended their losing streak on the road to six games. It is their longest such skid since they lost nine straight away games in 2009.

"We shut down for one second and it cost us," said Red Bulls coach Jesse Marsch. "We're not able to score on the road. That's the most difficult thing to come up with a solution for.

Bush was only really challenged once — New York's best chance of the game came five minutes in, when striker Bradley Wright-Phillips tested Bush from in close.

"That's the sign of good defending," said Bush, who recorded his second clean sheet of the season. "A lot of times this year, there were guys getting shots from six yards out and one-versus-ones. We're more than comfortable having guys shoot from 20 or 25 yards out.

"If we just keep the game in front of us, we're a good team."

Montreal plays its next three MLS games on the road, starting June 10 in Kansas City. The Impact will be missing seven players due to international duty in that contest, including Dzemaili, Laurent Ciman and Patrice Bernier.