FOXBOROUGH, Mass. — Toronto FC had its eight-game unbeaten streak snapped on Saturday, falling 3-0 on the road against the New England Revolution.
Jun 3, 2017 11:59 PM By: Canadian Press 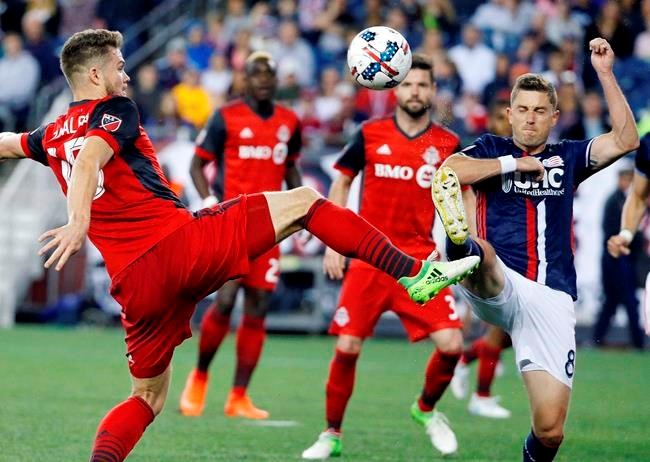 FOXBOROUGH, Mass. — Toronto FC had its eight-game unbeaten streak snapped on Saturday, falling 3-0 on the road against the New England Revolution.

"I thought our legs caught up to us a little bit," said Toronto coach Greg Vanney.

"I think we looked a little bit tired, but I think we set ourselves up early in the game. We weren't very good with the ball, forcing things going forward, not very patient, and really getting disjointed getting spread out, separated from the back to front. Creating too many turnovers against ourselves that required a lot of energy to try to deal with situations.

Juan Agudelo had a goal and an assist and Benjamin Angoua added his first career MLS goal for New England.

Toronto was playing without captain Michael Bradley and Jozy Altidore, who are both away on international duties.

"Michael covers a lot of ground for us, he's a leader for us. And Jozy is obviously a great player, but at the same time, this team has shown that we've got a lot of depth and guys that can step us and do their jobs and we've done that in other moments. Tonight just wasn't our night," said Toronto defender Eriq Zavaleta.

Kelyn Rowe won a ball near midfield and tapped it to Fagundez who slotted it to Agudelo at the top of box. He dropped it to a charging Fagundez who blasted it just inside the post to double the advantage. Agudelo's header from point-blank range, after a shot by Fagundez bounced twice off the cross bar, capped the scoring.

New England's Cody Cropper had three saves — including a leaping stop of a long-range shot by Armando Cooper in the 34th minute — for his fourth shutout of the season.