Abanda: 'I will never get the same treatment (as Bouchard) because I am black' 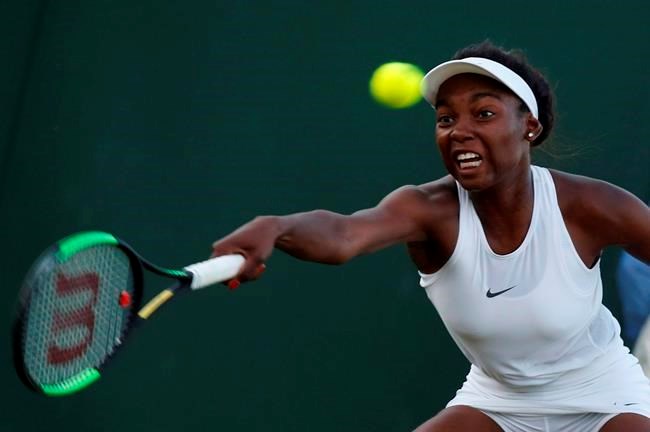 But the 21-year-old from Montreal said her Twitter comments about discrimination on Wednesday weren't aimed at fellow player Eugenie Bouchard.

"I don't have a problem with her, and I respect all the things she's achieved and I don't want to bash Bouchard, she played amazing in Fed Cup, we got along really well," Abanda said Wednesday from Slovakia after reaching the second round of the ITF Trnava tournament.

She held a conference call hours after tweeting that she doesn't get the same recognition as Bouchard because she is black. Responding to a Twitter user who questions the discrepancy in attention, Abanda posted Wednesday morning: "I will never get the same treatment because I am black. It's the truth!" Abanda posted on her verified account.

Abanda is currently the highest-ranked women's tennis player in Canada at No. 128. Bouchard, a former No. 5 from Westmount, Que., has seen a steep decline in her career since reaching the Wimbledon final in 2014 and is currently ranked 169th. But she's remained in the public eye partly because of her social media presence, endorsements and modelling sessions.

The problem is "a lot deeper" than simply comparing the two players, Abanda said on the call.

"I think the problem is a racial problem, and I think that there is some inferiority and superiority going on, and I think that speaking from my personal experience, I have lived with racism in tennis growing up and playing in Quebec, and I'm just speaking the truth and what I've experienced," she said.

She said she's witnessed "hundreds and hundreds" of discriminatory acts throughout her career, and recalled, as an example, an opponent at an under-12 tournament who told her to "go back to your country."

She mentioned being excluded from a Tennis Canada video celebrating Canada Day last year that featured the country's top players.

"I don't know the reason why I was excluded to this day," she said. "I found it weird that I was excluded from the video, as all the other Canadian players were there. It was unfair to exclude me."

A Tennis Canada spokesperson, however, said Abanda was excluded because the player had offered video that was of poor quality, and that Abanda wasn't available to shoot a segment for the video in Montreal. The spokesperson also pointed out that Felix Auger-Aliassime, who is black, was featured in the video.

Abanda also talked about the lack of attention to the concussion she suffered during Canada's Fed Cup tie against Ukraine last month.

"No media talked about it, nobody knows what's going on, everything is under the shadows," Abanda said. "So I think opportunity, I feel like when you're black, you don't get the same exposure that you should get for a player ranked 120.

"I'm not asking to be exposed like a No. 1 player, I'm not asking to get the same recognition as other players who have achieved more, I'm just saying that there is a minimum that sometimes I don't even get."

Tennis Canada said in a statement later Wednesday that the national sport organization "deplores racism in all of its forms" and that it doesn't feel targeted by Abanda's remarks.

"She is actually the youngest player to have ever joined the National Tennis Centre in Montreal at the age of 12," the statement said. "We hope that her new position as the number one female Canadians singles player will eventually result in her breaking into the Top 100 . . . We know that she has the talent and commitment to establish her place among the Top 50 players or better in the highly competitive world of professional tennis."

Abanda said she is on good terms with Tennis Canada, and pointed out she trained a few days ago with coach Sylvain Bruneau, alongside fellow Canadian players Bianca Andreescu and Rebecca Marino at the national centre.

"My whole point is that I really want to promote equality, I want players to be equal in Canada, I want everybody to be treated the same," she said. "Beyond tennis, we're all human and we should all treat each other with respect, first of all, before even playing tennis."

Note to readers: This is a corrected story. A previous version listed Bouchard's doubles ranking instead of her singles.