OTTAWA — Ukraine's President Volodymyr Zelensky says he and Prime Minister Justin Trudeau have discussed the need to "punish" the Iranians responsible for the downing of the Ukrainian airliner near Tehran last week that killed 176 people.
0
Jan 14, 2020 7:12 PM By: Canadian Press 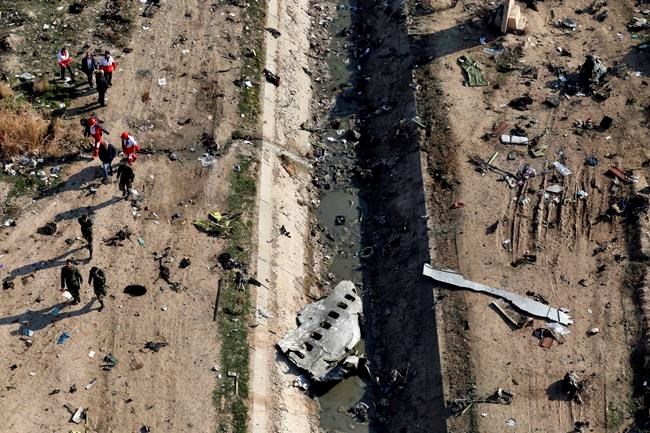 OTTAWA — Ukraine's President Volodymyr Zelensky says he and Prime Minister Justin Trudeau have discussed the need to "punish" the Iranians responsible for the downing of the Ukrainian airliner near Tehran last week that killed 176 people.

Zelensky was describing his latest conversation with Trudeau in a Twitter posting, hours after Iran announced arrests in the fatal crash. It came as Canada, Ukraine and their international allies prepared for a meeting on Thursday to push Iran for justice for the families of the people aboard the plane shot down by an Iranian surface-to-air missile.

"Our Ukrainian experts and diplomats are ready to collaborate closely with our Canadian counterparts in Tehran. I confirmed this to @JustinTrudeau once more. We will also co-ordinate efforts to punish those responsible for this tragedy," Zelensky wrote.

Zelensky and Trudeau also discussed "further co-ordination of efforts to ensure proper international legal liability of those responsible for the plane crash," according to a more detailed Ukrainian government account of their call — their third in a week.

Trudeau asked Zelensky for assistance in dealing with Iranian authorities on the identification of the bodies of crash victims, including Canadian citizens, the readout said.

"Ukrainian experts and diplomats are ready to fully assist Canadian counterparts in Tehran," Zelensky told Trudeau, according to the readout.

Trudeau's office, in its summary of the call, said the two "underscored the need for a full, complete and credible investigation with international participation" to provide "answers, accountability and justice that all those affected by this tragedy deserve."

The victims included 82 Iranians, 57 Canadians, 11 Ukrainians and nationals of Sweden, Afghanistan and Germany.

The Canadian government has said 138 of the passengers were bound for Canada. The Canadian Press has independently confirmed at least 86 victims with ties to Canada, many of them students and professors returning after spending the December break visiting relatives in Iran.

There were few details of the specific charges announced Tuesday by an Iranian judiciary spokesman. The announcement followed a surge of angry protests in Iran over the downing of the Ukraine International Airlines plane, and after Iran denied for three days that its Islamic Revolutionary Guard Corps had shot it down.

"The judiciary should form a special court with a ranking judge and dozens of experts," President Hassan Rouhani said in a televised address to the Iranian people. "This is not an ordinary case. The entire the world will be watching this court."

Rouhani called the incident "a painful and unforgivable" mistake and promised that his administration would pursue the case "by all means."

Global Affairs Canada said Foreign Affairs Minister Francois-Philippe Champagne will attend Thursday's meeting in London of the International Co-ordination and Response Group for families of victims of Flight PS752 "to achieve closure, accountability, transparency and justice — including compensation — for the families and loved ones of the victims."

Representatives of Ukraine, Sweden, Afghanistan and Britain are to be at the meeting at Canada's high commission.

"Together, we will continue to expect and demand full co-operation and accountability from Iranian authorities. Our priority remains ensuring support of the families and loved ones of the victims," Champagne said in a statement.

Scheer called his requests "an appropriate and measured response."

"Immediate action is necessary. The Iranian regime can not get a free pass after killing 57 Canadians," Scheer wrote, noting Trudeau had briefed him on the situation.

Iran's civil aviation authority said on its website that Canadian investigators had their first visit to the crash site outside of Tehran on Tuesday afternoon, as part of an international team looking into the sequence of events that ended with the plane hitting the ground in flames.

The aircraft was shot down hours after Iran launched missiles against two military bases in Iraq where U.S. forces, and also some Canadians, are stationed.

The new video fills a gap about why the plane's transponder stopped working seconds before it was hit by a second missile.

The strikes against the military bases in Iraq were in retaliation for a targeted drone strike on Jan. 3 by the U.S. that killed Iran's top general, Qassem Soleimani, the head of its elite Quds Force. And that strike was partly in response to the death of a U.S. military contractor, who was killed in a rocket attack in northern Iraq Dec. 27 that U.S. authorities say was launched by an Iran-backed militia.

On Capitol Hill in Washington, where Republican and Democrat lawmakers have been sparring for days over whether the strike against Soleimani was justified, House Minority Leader Kevin McCarthy dismissed the notion that the U.S. or President Donald Trump should bear any blame for the downing of the jet.

"There is no blame here for America. America stood up once again to restore freedom. Iran went past a red line they had not gone before, killing a U.S. citizen. Iran shot down a commercial innocent airliner. There is no doubt where the blame lies."

In a Global News interview Monday, Trudeau said had it not been for the recently elevated tensions in the Middle East, "those Canadians would be right now home with their families."

This report by The Canadian Press was first published Jan. 14, 2020.

— With files from The Associated Press, James McCarten in Washington and Jordan Press in Ottawa

Studies question assumptions on industrial damage to Wood Buffalo park
Jan 19, 2020 10:00 AM
Edmonton fire chief says people must adapt to more wildfires in their lives
Jan 19, 2020 10:00 AM
Judge permanently retires one-time lawyer Harry Kopyto 31 years after disbarment
Jan 19, 2020 10:00 AM
Comments
We welcome your feedback and encourage you to share your thoughts on this story. We ask that you be respectful of others and their points of view, refrain from personal attacks and stay on topic. To learn about our commenting policies and how we moderate, please read our Community Guidelines.