WASHINGTON — The partisan cracks in America's collective effort to combat COVID-19 are growing wider by the day — growing, some say, not due to grassroots sentiment but by political forces both within and outside the United States.
Apr 20, 2020 5:48 PM By: Canadian Press 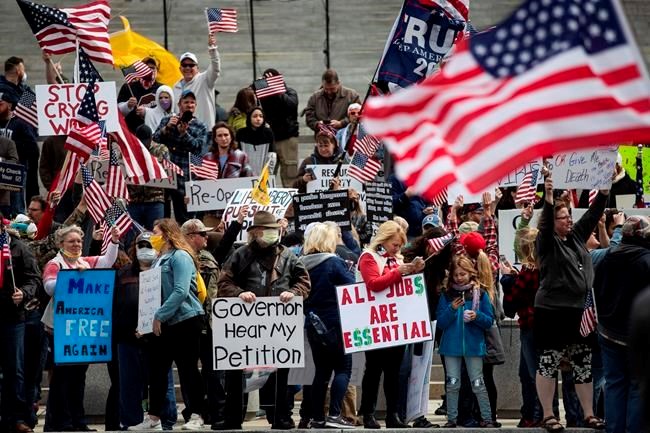 WASHINGTON — The partisan cracks in America's collective effort to combat COVID-19 are growing wider by the day — growing, some say, not due to grassroots sentiment but by political forces both within and outside the United States.

Hundreds of protesters, many without face masks, packed together Monday outside Pennsylvania's capitol building in the city of Harrisburg to demand that the state's shelter-in-place order be rescinded and businesses reopened at the end of the month.

The demonstration, like recent predecessors in Michigan, Maryland, Virginia and Washington state, bore all the ubiquitous hallmarks of a Donald Trump rally: the coiled rattlesnake of yellow Gadsden flags, crimson "Make America Great Again" hats and countless hand-lettered proclamations of devotion to God and the U.S. constitution.

From state to state, even the slogans — "No New Normal," "Our Rights Trump Your Fear" and "My Body, My Choice," a cheeky riff on an abortion rights sentiment more commonly heard from the other side of America's ideological divide — have a familiar echo.

Experts have taken to calling them "Astroturf" protests, the artificial product of an organized bid for straight-faced media coverage that ultimately undermines what polls suggest is in fact broad public support, regardless of political affiliation, for state-level stay-at-home orders currently in effect from coast to coast.

"This is what's frustrating about both the protests and the coverage that they're getting," said Brett Bruen, a former U.S. diplomat in the Obama White House who now heads up an international foreign-policy consulting firm.

"That's the story that many Americans are seeing about the views that their fellow citizens have on the order, an effort being made by governors to protect them."

The Washington Post reported Monday that some of the recent protests were organized on Facebook by a trio of right-wing pro-gun activists, while others have clear ties to prominent conservative donors and supporters of Trump, who has tweeted his support for the protests even as he insists it will be up to the states to decide when to sound the all-clear.

Facebook, for its part, refused to say Monday whether it is investigating the site's role in drumming up dissent.

"Unless government prohibits the event during this time, we allow it to be organized on Facebook," a spokesperson said. "For this same reason, events that defy government's guidance on social distancing aren't allowed on Facebook."

A new online poll by Leger and the Association for Canadian Studies, released Monday, suggests the vast majority of respondents on either side of the Canada-U.S. border would prefer to see restrictions remain in place until the virus is under control.

Of U.S. residents surveyed, 27 per cent wanted to wait for a vaccine, compared to 20 per cent in Canada, while 23 per cent of Americans said they would prefer to see no new cases for at least two weeks, compared with 28 per cent of their Canadian counterparts. Comparable shares in each country want to see the pressure on the health care system eased and only moderate or sporadic numbers of new cases.

Only 12 per cent of U.S. respondents said they want to see the restrictions lifted immediately — significantly more than the seven per cent of Canadians surveyed, but still only a sliver of the total responses to the poll, which was conducted April 17-19 and surveyed 1,504 Canadian and 1,001 American members of Leger's online panel.

Internet-based surveys cannot be assigned a margin of error, because online polls are not considered representative of the population at large.

Bruen, meanwhile, is confident that disinformation campaigns in Russia and also China have entered the fray and are actively working to amplify the sense of growing public discord.

China, he said, is pushing back against U.S. anger over how it handled the earliest stages of the outbreak, which originated in the city of Wuhan back in December. The country has been accused of playing down the potential severity of the virus until it was too late. Claims from China that the virus actually originated in the U.S. continue to persist, he added.

"There is an effort ... to create both a level of responsibility that lies in the origination of the virus, as well as with respect to how the U.S. is managing this, trying to suggest that Trump's mismanagement of the crisis is somehow absolving them of their culpability — both in the genesis of this, as well as in the lack of transparency."

Bob Pickard, a Toronto-based public relations expert and executive communications consultant, said the pandemic has only served to re-emphasize the deep rifts that exist in the United States, aided and abetted by the divisive nature of social media platforms.

"Nothing has stopped the social media algorithms from doing their polarizing and toxic work," Pickard said in an interview earlier this month.

"It was broken before, it was polarized before, and the dysfunction and chaos is even more glaring as a result of this."