Trump decries 'lowlifes' and racism in Canada; In The News for June 3

In The News is a roundup of stories from The Canadian Press designed to kickstart your day. Here is what's on the radar of our editors for the morning of June 3 ... --- American anti-racism protests ...
Jun 3, 2020 8:12 AM By: Canadian Press 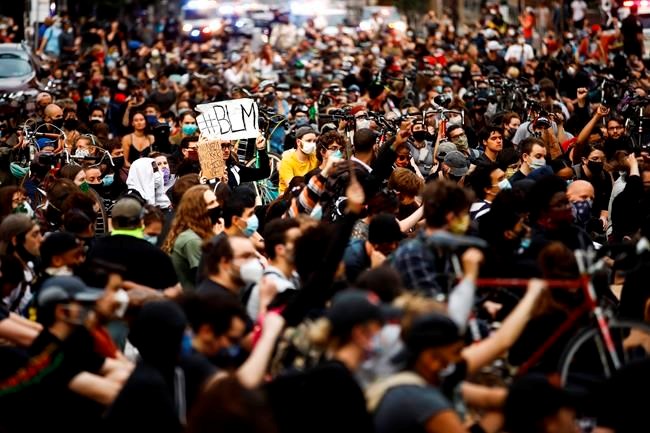 In The News is a roundup of stories from The Canadian Press designed to kickstart your day. Here is what's on the radar of our editors for the morning of June 3 ...

Undeterred by curfews, protesters streamed back into the nation's streets Tuesday, hours after President Donald Trump pressed governors to put down the violence set off by George Floyd's death and demanded that New York call up the National Guard to stop the "lowlifes and losers."

But most protests passed peacefully, and while there were scattered reports of looting in New York City, the country appeared calmer by late Tuesday than it did a day earlier, when violence swept through multiple cities.

The president, meanwhile, amplified his hard-line calls from Monday, when he threatened to send in the military to restore order if governors didn't do it.

"NYC, CALL UP THE NATIONAL GUARD," he tweeted. "The lowlifes and losers are ripping you apart. Act fast!"

One day after a crackdown on peaceful protesters near the White House, thousands of demonstrators massed a block away from the presidential mansion, facing law enforcement personnel standing behind a black chain-link fence. The fence was put up overnight to block access to Lafayette Park, just across the street from the White House.

"Last night pushed me way over the edge," said Jessica DeMaio, 40, of Washington, who attended a Floyd protest Tuesday for the first time. "Being here is better than being at home feeling helpless."

The crowd remained in place after the city's 7 p.m. curfew passed, defying warnings that the response from law enforcement could be even more forceful. But the protest lacked the tension of the previous nights' demonstrations. The crowd Tuesday was peaceful, even polite. At one point, the crowd booed when a protester climbed a light post and took down a street sign. A chant went up: "Peaceful protest!"

Prime Minister Justin Trudeau will continue today to make the case for a co-ordinated global response to cushion the economic impact of the COVID-19 pandemic on the world's poorest countries.

He'll be among the leaders and heads of state to deliver remarks during a virtual summit of the Organization of African, Caribbean, and Pacific States (OACPS).

Among other things, he is expected to promise that Canada will partner with developing countries, which stand to be the hardest hit by the pandemic, and help to rally the world behind measures like debt relief to help them survive the crisis.

Without a global co-ordinated recovery plan, the UN estimates the pandemic could slash nearly US$8.5 trillion from the world economy over the next two years, forcing 34.3 million people into extreme poverty this year and potentially 130 million more over the course of the decade.

While no country has escaped the economic ravages of the deadly novel coronavirus that causes COVID-19, developing countries, already in debt distress before the pandemic, cannot afford the kinds of emergency benefits and economic stimulus measures undertaken in wealthy, industrialized countries like Canada.

Nova Scotia's largest nursing home is planning for a future of private rooms to keep residents safe, but it has taken a wrenching pandemic death toll to create the shift — and it remains unclear whether government will fund a long-term fix.

"We're currently down to fewer than 25 rooms with shared accommodations at the Halifax campus," Janet Simm, the Northwood facility's chief executive, said in a recent interview.

That's a huge shift from before the pandemic when more than 240 residents lived in two- or three-person units. Now, fewer than 50 people remain in the shared spaces, some of whom are couples or others who specifically request a roommate, Simm said.

But the facility's desire to create more space, which its board sought for years before the pandemic, unfolded through tragedy rather than design.

COVID-19 illnesses spread among the 485 residents after asymptomatic workers brought the virus there in early April, and Simm says the bulk of the 53 who had died, as of Tuesday, and the 240 infected were in shared units.

Khari Jones doesn't have to look far for a reminder that racism exists in Canada.

The Montreal Alouettes head coach divulged during a teleconference Tuesday he received death threats while he was the quarterback of the CFL's Winnipeg Blue Bombers because of his interracial marriage. Jones is black and his wife, Justine, is white.

An emotional Jones — speaking just over a week after a white policeman kneeled on the neck of a black man, resulting in a tragic death in Minneapolis — said the threats came in the form of letters that remain in his possession.

"It's just a reminder you always have to be on alert a little bit," Jones said. "It could've been one person but one is still too many and to do that on the basis of a person's skin colour is horrible.

"Every once in a while, every blue moon I take a look at them. They never found the person who wrote the letters — he used a fake name — but he's still out there, people like him are still out there. That was 20-something years ago and it's still happening."

The Bank of Canada is expected to keep its key interest rate unchanged this morning on the first day of governor Tiff Macklem's tenure.

Economists expect the central bank will maintain its target for the overnight rate at 0.25 per cent, which former governor Stephen Poloz has repeatedly said is as low as it can go.

Poloz and the bank's governing council would have met over the past few days and finalized the rate decision last night.

Macklem likely would have been part of the meetings, but it's unlikely that the language of the rate announcement will fully capture his views.

Instead of focusing on the rate itself, experts say they will be paying close attention to the language used in the rate announcement about the expected path for the economy in the coming weeks and months.

This report by The Canadian Press was first published June 3, 2020