Trudeau promises stockpile policies to get overhaul to prevent waste

OTTAWA — Prime Minister Justin Trudeau says Ottawa will avoid destroying valuable medical equipment from the national stockpile from now on by making sure it gets used before it expires.
Apr 20, 2020 8:32 PM By: Canadian Press 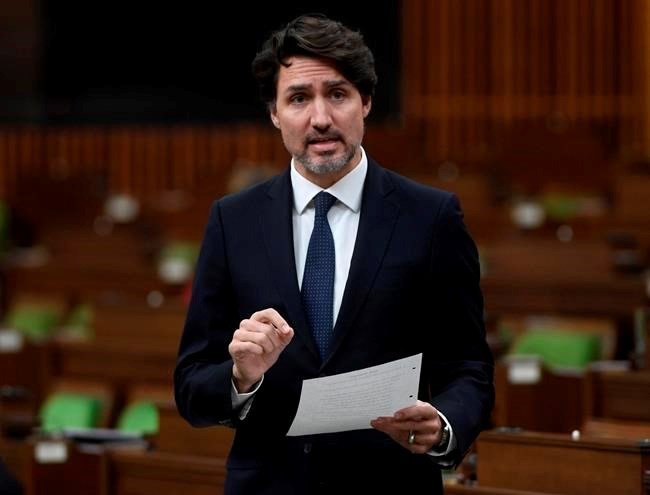 OTTAWA — Prime Minister Justin Trudeau says Ottawa will avoid destroying valuable medical equipment from the national stockpile from now on by making sure it gets used before it expires.

Trudeau said he was both surprised and dismayed to find out recently that Canada last year destroyed as many as two million N95 respirator masks — the hottest commodity in a COVID-19 ravaged world right now. The masks, along with more than 400,000 pairs of medical gloves, had expired in 2014.

"We were very troubled by the story," he said, when asked about the matter by Conservative Leader Andrew Scheer as the House of Commons resumed sitting Monday.

Scheer accused the government of cutting funding for pandemic preparedness from $73 million in 2014, to $51 million in 2019, and allowing precious materials to expire so that they were not available to be used when front-line health workers desperately needed them.

Trudeau said items in the stockpile that are getting older should be distributed for use and then replaced, rather than allowing them to expire.

"Obviously that didn't happen and we need to make sure we have better protocols going forward so we don't find ourselves in a situation like this," Trudeau said.

Health Minister Patty Hajdu already admitted recently the stockpile did not have enough supplies in it to meet the needs of this pandemic.

Still, she told the House of Commons Monday the stockpile has been able to fulfil all 33 requests it has had from the provinces for personal protective equipment.

Canada's National Emergency Strategic Stockpile was first created in 1952, but has evolved as a source of emergency supplies to help provinces and territories during a major event or crisis. It contains everything from medical masks and gloves, to blankets and portable cots, as well as drugs like antivirals, and antidotes for chemical and biological weapons.

In the spring of 2019, when the masks and gloves in the Regina warehouse were found to be five years past their expiry date, the government dumped the materials and closed the warehouse.

The Public Health Agency of Canada says the stockpile has been accessed several times in the last 10 years including during the H1N1 outbreak in 2009, as well as during floods, wildfires and a tuberculosis outbreak in Salluit, Que., in 2018.

N95 respirators in particular are in huge demand around the world as one of the only devices able to truly protect someone from being infected with the novel coronavirus because they can filter out airborne particles the best.

Public Services and Procurement Minister Anita Anand said last week Canada had ordered about 145 million N95 respirators, and expected about two million of them to be on hospital sites by the end of last week. All of them were coming from China.

She said Canada had reserved warehouses in China to collect the equipment, was using Canada's embassy in Beijing to help co-ordinate and hired both Deloitte Canada and Bollore Canada, to help get the supplies shipped.

But Scheer Monday asked Trudeau twice about reports that three chartered planes from Canada sent to China to pick up medical equipment returned to the country empty Sunday. Trudeau did not deny the report, saying Canada, like other countries has struggled to get orders filled when the entire world is trying to buy the same equipment right now.

A spokeswoman for Anand later told The Canadian Press four flights from China arrived as expected over the weekend with N95 and surgical masks, protective coveralls, and a key component of the reagent needed for COVID-19 tests. Cecely Roy also said one chartered flight returned empty.

"This occurred due to on-the-ground congestion caused by a significant surge in cargo flights out of terminals at the Shanghai Airport," she wrote in an email. "As a result, the intended cargo was unable to get to the plane before its required take-off time."

Roy said the government is taking steps to prevent that from happening again.