'Taken too soon, too violently,' says woman whose husband, kids were shot dead

A woman who lost her husband and three of her children in a grisly shooting in Oshawa, Ont.
Sep 17, 2020 4:47 PM By: Canadian Press 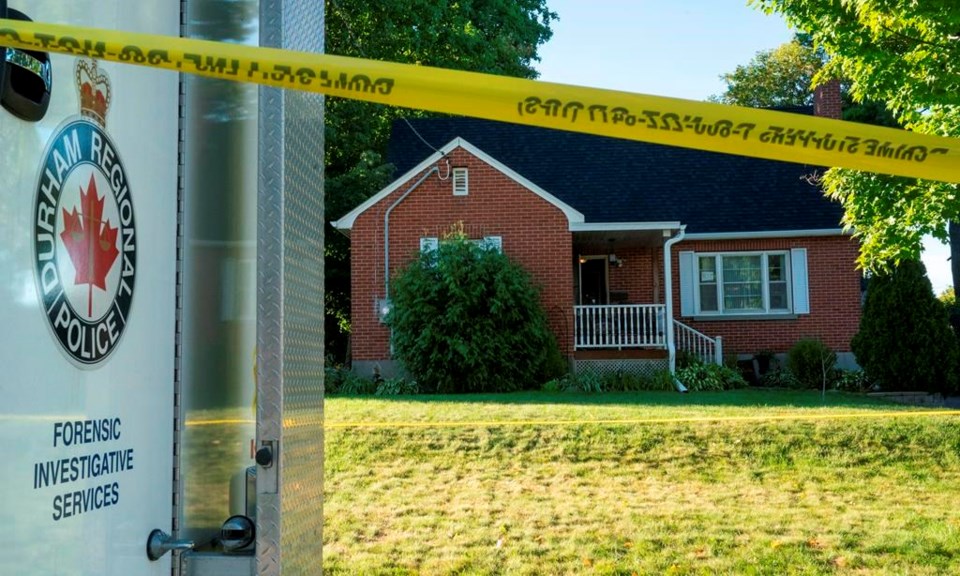 A woman who lost her husband and three of her children in a grisly shooting in Oshawa, Ont., said she and her surviving son are struggling to come to grips with the loss, and simply getting from one day to the next sometimes feels like an "impossible task."

Loretta Traynor, who was injured in the Sept. 4 shooting, spoke alongside her son Sam, a university student, at a funeral service for their four family members on Thursday.

The four were "taken too soon, too violently, and without warning," Traynor said, adding she can't believe or accept that any good will come out of their tragic deaths.

"I have lost so many parts of me that made me a better person. They were the best of me," said Traynor, who used a wheelchair during the service.

"But with Sam beside me and all of you supporting me, I have hope that those parts of Chris, Bradley, Adelaide and Joey — those parts that make up the best parts of me — can find their way back in."

Durham regional police have identified the shooter as 48-year-old Mitchell Lapa, who is also related to the family. Media reports say he is Loretta Traynor's brother.

Loretta Traynor painted a vivid picture of a joyous, tight-knit family as she paid tribute Thursday to her husband and three children, her voice breaking at times.

Her husband Chris, she said, loved to make her laugh, and still found new ways to do so after 23 years of marriage. Together, they would laugh "until we had tears in our eyes," sometimes loudly enough to draw the kids from elsewhere in the house, she recalled.

Bradley was "kind, honest and loving," and communicated his feelings through a variety of groans so distinct the family had planned to compile a guide to help others decipher them, she said.

Adelaide, meanwhile, was a "firecracker and a flower wrapped into one," the kind of girl who "radiated joy" during an exercise class even though she was doing all the steps wrong, her mother said. "She took my breath away," Traynor said.

Joseph, she said, was "born with a smile on his face and he never, ever stopped smiling since," and had a gift for bringing other people into whatever he was doing.

Speaking after his mother, Sam Traynor described the family home as "chaotic" and "always so full of joy and love," and urged people to remember the happiness the four brought rather than the tragedy of their deaths.

"I wish with all my heart that it could have been longer, and we could have all gone through life together," he said.

"I wish dad could have seen me graduate from university... I wish Bradley could be the best man at my wedding. I wish I could watch Adelaide grow into the powerful young woman I could already see her becoming. I wish I could see Joey achieve his dreams of playing for the Dodgers."

Saying goodbye to them has been "the hardest thing I've ever had to do," he said.

Mourners wore masks and sat distanced in the pews of the St. Mary of the People Catholic Church in Oshawa, Ont., on Thursday, some wiping away tears as the pair delivered their eulogies.

The funeral was by invitation only for family and close friends, but was live-streamed for the public. Members of the public were also able to participate Wednesday in a drive-past visitation.

An online fundraiser for the family had collected more than $180,000 as of Thursday afternoon, along with countless messages of sympathy from friends and strangers alike.

This report by The Canadian Press was first published Sept. 17, 2020.