Soldiers get orderly training ahead of Quebec long-term care deployment 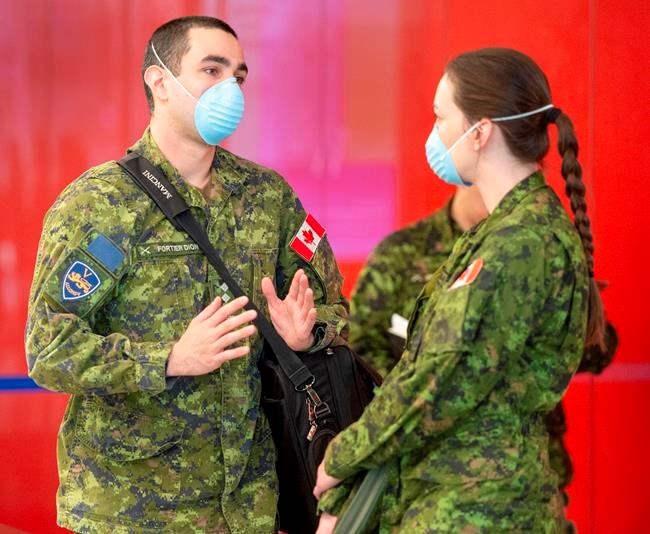 MONTREAL — Canadian Forces soldiers got a crash course in senior care Wednesday as members with no medical background or orderly experience prepared to deploy to Quebec long-term care homes hardest hit by COVID-19.

The first wave of soldiers — about 400 in total — began arriving in the Montreal area to receive intensive training and familiarize themselves with 13 homes heavily hit by COVID-19.

At a Montreal junior college, they learned the basics from the Red Cross on how to deal with elderly patients before they are sent to specific homes on Friday and Saturday. On site they will perform such tasks as disinfecting rooms, managing logistics, moving equipment and feeding patients.

"It's definitely a different environment for us, but I think our flexibility, empathy and recognition that our civilian health-care counterparts are shouldering a significant burden at this time is motivating them to just get involved," Col. Tim Arsenault said.

One week ago, Quebec requested more soldiers from the federal government to help with a shortage of workers in the care homes where the majority of COVID-19 deaths have occurred and where staff have either fallen ill or failed to return to work.

The soldiers arriving Wednesday included about 200 based at Valcartier, Que., and another 200 reservists activated from the Montreal area, who will join colleagues with medical training who've been working in five Quebec homes since April 20.

"For our medical folks, there's a bit of a learning curve because we're not used to working in that environment, and our soldiers as well," Arsenault said.

Pte. Jessy Collison, a 26-year-old private based at Valcartier, has been on the ground for several days, pulling 12-hour shifts.

The military medical technician said it's physically taxing work but well worth it.

"I'm just happy at the end of the day I helped some people and made the orderlies who have been working tirelessly, made their jobs a little easier," Collison said. "And the residents, they're happy to see us."

Michelle Mercier, prevention and safety director for the Canadian Red Cross, said soldiers receive the same four-hour crash course as civilians wanting to work as attendants in the homes.

They're shown how to don and shed personal protective equipment, communicate with older residents, recognize bed sores and transfer patients to and from a bed without hurting themselves or their elderly wards.

Arsenault said it's unclear how long the soldiers will be needed on the ground, but they'll stay as long as needed.

"The agreement between the provincial and federal governments was to re-evaluate every 14 days," he said. "Our soldiers are ready, they're highly motivated."

Health Minister Danielle McCann expressed optimism that the shortage of workers can be addressed.

After trying different options to find people with a health care background, the province announced that it would allow anyone able to work to apply and received 11,000 applicants.

"So, the situation is slightly improved, and we hope it's going to get better day after day," McCann said Wednesday.

— With files from Morgan Lowrie.