Nova Scotia massacre and COVID Commons wrangle; In The News for April 20

In The News is a roundup of stories from The Canadian Press designed to kickstart your day. Here is what's on the radar of our editors for the morning of April 20 ... NOVA SCOTIA SHOOTER ...
Apr 20, 2020 8:02 AM By: Canadian Press 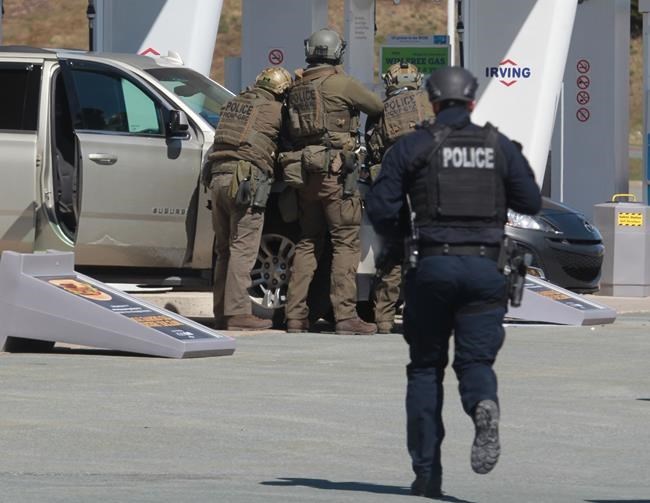 In The News is a roundup of stories from The Canadian Press designed to kickstart your day. Here is what's on the radar of our editors for the morning of April 20 ...

RCMP say 17 people are dead, including one of their officers, after a man who at one point wore a police uniform and drove a mock-up cruiser went on a rampage across northern Nova Scotia in one of the deadliest killing sprees in Canadian history.

An RCMP officer, Const. Heidi Stevenson, is counted among the dead.

Investigators say the alleged shooter, identified as 51-year-old Gabriel Wortman, was also killed after police intercepted him at a gas station in Enfield, N.S.

His death is now being investigated by a police watchdog.

Meanwhile, RCMP are probing exactly how the weekend rampage unfolded.

Premier Stephen McNeil described the massacre as "one of the most senseless acts of violence in our province's history."

"I never imagined when I went to bed last night that I would wake up to the horrific news that an active shooter was on the loose in Nova Scotia," McNeil said in Halifax on Sunday.

In a series of tweets, he added that all Nova Scotians would be affected by the tragedy.

The House of Commons is poised to re-open today despite the COVID-19 pandemic thanks to an impasse between the four main political parties.

The Liberals announced Sunday that they had an agreement with the NDP and Bloc Quebecois to have 32 MPs meet in the House in person each Wednesday starting this week, with up to two virtual sessions also added for MPs to ask questions of the government.

Prime Minister Justin Trudeau said it would be "irresponsible" to resume sittings at a time when health experts are urging Canadians to limit their movement and work from home as much as possible to prevent the pandemic from spreading.

But Conservative Leader Andrew Scheer rejected the proposal, suggesting there remained many unanswered questions about holding a virtual sitting of the House of Commons and insisting on three in-person sittings per week.

Negotiations were still underway Sunday evening, but all four parties needed to agree to prevent the House from officially resuming on Monday.

The question now is how many MPs show up and what they will discuss.

Tossing and turning in the middle of the night. Lying awake for lengthy stretches. Waking up groggy.

The COVID-19 pandemic seems to be messing with a number of peoples' ability to get a good night's sleep these days. And sleep experts aren't surprised by that.

David Samson, an assistant professor of anthropology at the University of Toronto, believes our restless nights can be caused by our bodies' fear response to the coronavirus outbreak.

"When fear becomes chronic, you have a mismatch scenario (regarding) your perception of fear, and that creates an inability to fall asleep," Samson TOLD The Canadian Press. "With COVID-19, the threat isn't actually a lion or a rival group seeking to take your resources, it's invisible. And humans simply aren't very well-evolved to fight off invisible enemies."

Amanda Jewson, a sleep consultant in Toronto, blames pandemic-related sleep struggles on our bodies' physiological response to stress and anxiety.

She says hormones like cortisol and adrenaline spike when we're afraid, and that makes it difficult to get proper rest.

WASHINGTON — President Donald Trump says he will use the Production Act to increase manufacturing of swabs used to test for the coronavirus.

Many governors have for weeks urged the White House to further evoke federal powers to increase private industry's production of medical supplies as health officials work to slow the spread of the virus.

Trump has generally been reluctant to do so. But the president said during a briefing Sunday evening that he would use the measure to increase production of swabs and that he would soon announce that production reaching 10 million per month.

To emphasize the point, Trump waved a swab in front of reporters. Trump also said Mike Pence would hold a call with governors on Monday to discuss testing and send a list of lab facilities in their states.

BERLIN — The European Center for Disease Control says the continent now has more than 1 million confirmed cases and almost 100,000 deaths from the new coronavirus.

According to a tally posted on the ECDC Sunday, Spain had the most cases in the region with 191,726, followed by Italy, Germany, Britain and France.

It listed Italy as having the most deaths in Europe, with 23,227, followed by Spain, France, Britain and Belgium.

According to the tally, Europe accounts for almost half the global case load and more than half the total deaths.

NEW YORK — Organizers of Saturday's "One World: Together At Home" special say nearly $128-million was raised to fight the COVID-19 outbreak.

Most of the money came from corporate sponsors lined up before the special.

It was intended as a message of support for medical personnel and essential workers and a pick-me-up for those quarantined at home.

Lady Gaga, who curated the special, opened with a peppy version of the Charlie Chaplin song "Smile."

Beyoncé was a surprise guest who spoke about how the virus is disproportionately affecting the black community.

NEW YORK — Another Broadway star has been hit by COVID-19.

Canadian actor Nick Cordero had to have his right leg amputated because of complications from COVID-19.

His wife says the Tony Award-nominated actor survived the surgery, and is now resting and recovering.

The 41-year-old Cordero was placed in intensive care at Cedars-Sinai Medical Center in Los Angeles on March 31st.

Cordero's credits include "Bullets Over Broadway," which earned him his Tony nod.