Manitoba to ease some COVID-19 restrictions starting in May

WINNIPEG — Many non-essential Manitoba businesses that have been shut down by the COVID-19 pandemic are to reopen as of Monday.
Apr 29, 2020 6:01 PM By: Canadian Press 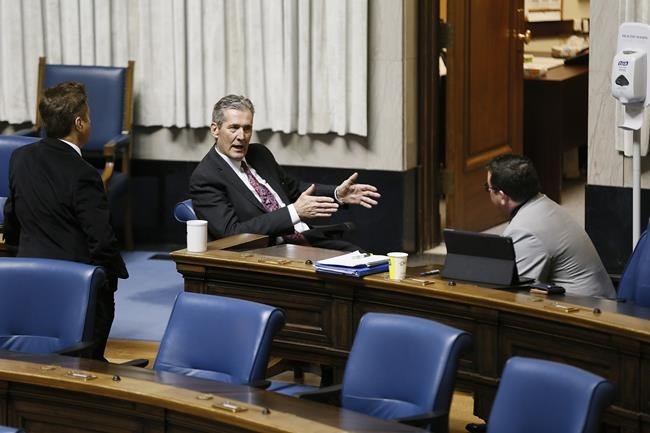 WINNIPEG — Many non-essential Manitoba businesses that have been shut down by the COVID-19 pandemic are to reopen as of Monday.

The Progressive Conservative government released a phased-in plan Wednesday to ease restrictions that were imposed in March to slow the spread of the novel coronavirus.

"We've had mom-and-pop shops forced to close their doors and lay off their people because of this pandemic," Premier Brian Pallister said.

"We need to keep working hard to protect our most vulnerable people by reopening our economy in a safe and a measured way."

Non-urgent health providers such as dentists and physiotherapists are to resume their services Monday. Retail stores, hair salons and restaurant patios are to reopen, but at no more than half their capacity.

Campgrounds, museums, libraries and art galleries will also be allowed to open their doors as long as they maintain physical distancing among customers.

Day camps will be allowed for up to 16 kids at each site. Schools are to remain closed.

Remaining in place are travel restrictions, including a 14-day self-isolation period for people returning from out of province, and a 10-person limit on public gatherings. Pallister said the limit may be raised to 25 in mid-May if the province's COVID-19 numbers remain low.

Large gatherings such as concerts and big-league sporting events will not be considered until September at the earliest.

The Manitoba Chambers of Commerce welcomed the move to allow more businesses to open.

The Manitoba Nurses Union said it is concerned about how quickly the province is moving.

"The decision to reopen the economy with less than a week’s notice does raise our concern about whether the (COVID-19) curve can remain flat for the foreseeable future," union president Darlene Jackson wrote in a statement.

"By significantly loosening restrictions that contradict social- distancing recommendations we risk undoing the progress we have made in limiting the spread of the virus."

"Will they have access to child care if they have to return to work, or will their fees be covered if they still must work from home? Will parents' jobs be protected if they must stay home to care for their children?" asked New Democrat legislature member Lisa Naylor in a written statement.

The province also released some numbers Wednesday based on modelling that health officials have done on the outbreak.

Under current restrictions on business and personal activity — not the looser rules to take effect Monday — Manitoba could expect a total of 6,250 cases by next April, chief public health officer Brent Roussin said. There are currently 273 cases, 54 of which are active. Six people have died since the outbreak began.

Roussin cautioned the projected numbers are general and subject to change. He was unable to say how many cases at any one time would tax the health-care system.

Still, he said, the numbers would appear to be manageable from a care perspective.

"It will depend on the speed at which those cases come and ... we don't have an accurate model on that," Roussin said.

"But just those number of cases over a year, given our current hospitalization rates and the current trajectory ... those type of figures would not be looking to overwhelm our capacity."