'Even if no one is watching:' Parade marshal named for cancelled Stampede

CALGARY — Filipe Masetti Leite has spent a lot of alone time in the saddle criss-crossing countries on horseback over the last eight years.
Jun 3, 2020 11:53 AM By: Canadian Press 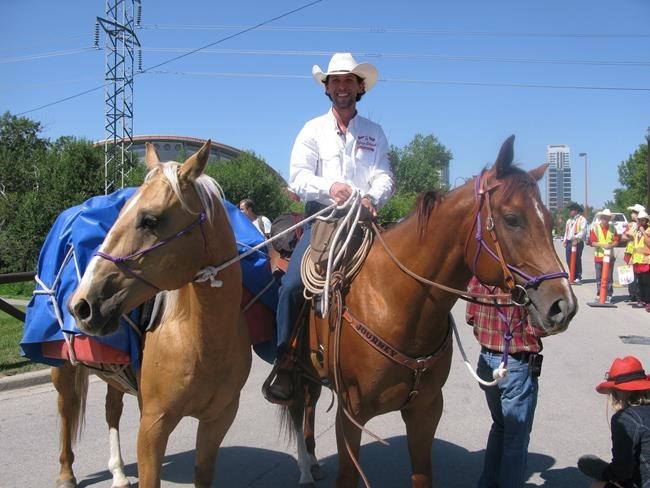 CALGARY — Filipe Masetti Leite has spent a lot of alone time in the saddle criss-crossing countries on horseback over the last eight years.

The latest journey for the long rider — from Anchorage, Alaska, to Calgary — will be bittersweet when he completes it in one month.

But he'll have a new title.

Masetti Leite has been named the 2020 Calgary Stampede's parade marshal, even though the event has been cancelled due to the COVID-19 pandemic.

Masetti Leite was asked to take the job while still on his trek and before the health crisis shut down most of the world.

"To be named the Calgary Stampede parade marshal is the biggest honour of my life. I can't wait to ride into Calgary on July 3, even if no one is watching," Masetti Leite said in a news release.

"I'm finishing where I started. It's a dream."

Masetti Leite, 33, immigrated to Canada from Brazil when he was a teenager. In 2012, he began his first journey from Calgary and spent two years riding his two horses through 10 countries in North, Central and South America.

He covered about 16,000 kilometres before reaching his final destination: his home in Espirito Santo do Pinhal, Sao Paulo.

Masetti Leite, who has a journalism degree from Ryerson University in Toronto, began a second trip in 2016, which spanned 7,350 kilometres over 15 months and took him from Brazil to Patagonia.

His latest 3,500-kilometre trek from Alaska has him arriving in Calgary next month on the same day the Stampede was scheduled to begin.

Masetti Leite said he's dedicating the remaining part of his ride to health-care workers around the world, who have worked tirelessly during the pandemic.

Despite the cancellation of this year's edition of what is called the "Greatest Outdoor Show on Earth," Stampede president Dana Peers said Masetti Leite was selected long before the world changed.

"The choice of Filipe Masetti Leite for the Calgary Stampede parade marshal has been many years in the making," Peers said.

A long rider is someone who has ridden more than 1,600 continuous kilometres on a single equestrian journey.

The inspiration for Masetti Leite came from a similar quest in 1925 by the original long rider, Aime Tschiffely, a Swiss school teacher, who rode 16,000 kilometres alone from Buenos Aires to New York City and wrote about his experiences.

Masetti Leite has documented his travels and written the book "Long Ride Home: Guts and Guns and Grizzlies, 800 Days Through the Americas in a Saddle.''

This report by The Canadian Press was first published June 3, 2020