OTTAWA — The construction of a new military refuelling station in the Arctic is facing another delay more than 13 years after it was first promised by the federal government, with one analyst raising concerns about other pressing military needs in th
Aug 3, 2020 1:23 PM By: Canadian Press 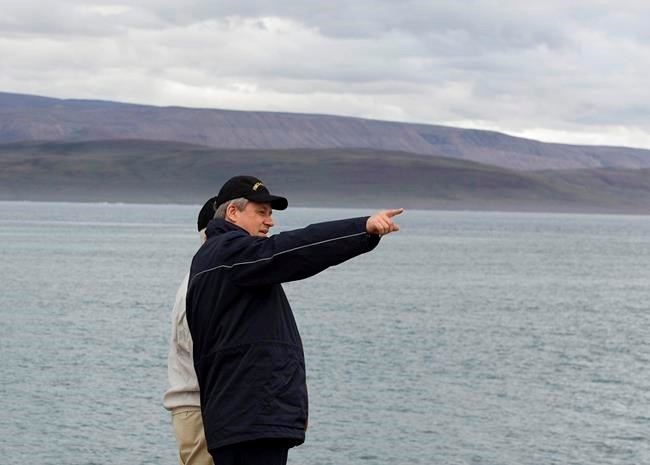 OTTAWA — The construction of a new military refuelling station in the Arctic is facing another delay more than 13 years after it was first promised by the federal government, with one analyst raising concerns about other pressing military needs in the region.

Former prime minister Stephen Harper announced plans to build the Nanisivik deep-water port in Nunavut, along with up to eight armed Arctic patrol vessels, during a trip to the Far North in 2007.

The port, considered one of the crown jewels of the Conservative government's Arctic strategy, was intended to provide fuel to the patrol ships and other federal vessels while expanding the military's permanent footprint in the North.

The long-standing expectation was that the port located at the site of an old mining jetty on Baffin Island, about 20 kilometres from the community of Arctic Bay, would be ready by the time the first of those ships was delivered to the Royal Canadian Navy.

Yet while the first Arctic patrol vessel was handed over to the navy on Friday after numerous delays and cost overruns, the Department of National Defence confirmed the Nanisivik facility won't be operational until at least 2022.

Defence Department spokeswoman Jessica Lamirande said COVID-19 scuttled this year's construction season, which can only occur between June and September because of weather in the North.

"Due to COVID-19 delays, a small number of contractors are expected to return to the site in August to start the 2020 work season," Lamirande said in an email.

"This means the season will be much shorter than planned and will only allow for a limited amount of work to be completed."

COVID-19 is only the most recent challenge to plague construction of the Nanisivik facility, which was originally supposed to be up and running in 2013 and include an airstrip and be manned throughout the year.

The airstrip and year-round service were cut from the plans after the project's original $100-million budget was found to have more than doubled to $258 million in 2013. The current price tag is estimated at $146 million, according to Lamirande.

The federal government has also faced environmental hurdles due to the need to clean up the old fuel-tank farm located on the site, which was home to a port used to ship ore from an old zinc mine. There were also structural issues with the existing jetty.

Lamirande said significant progress has been made on the facility since the first full construction season in 2015, with nearly all fuelling infrastructure in place.

But the fact the port still hasn't been finished, despite the scope of the project having been dramatically scaled back, is both disheartening and troubling, said defence analyst David Perry of the Canadian Global Affairs Institute.

Those include upgrading the string of increasingly obsolete radars that forms the backbone of North America's system for incoming missiles and air- and water-based threats, as well as several airstrips in the area that will be used by Canada's new fighter jets.

Those projects are expected to start in the coming years.

"It's kind of dispiriting how long it has taken us to develop relatively simple infrastructure at one of the most accessible parts of our Arctic," Perry said of Nanisivik.

"The length of time it has taken us to build doesn't leave a lot of confidence that the other projects are going to move in a relatively quick timeframe."

This report by The Canadian Press was first published Aug. 3, 2020.