OTTAWA — Hopes that Parliament could speedily approve emergency legislation freeing up billions in aid to help Canadians weather the COVID-19 pandemic were dashed Tuesday over Conservative objections to what they dubbed a Liberal "power grab.
Mar 24, 2020 11:59 PM By: Canadian Press 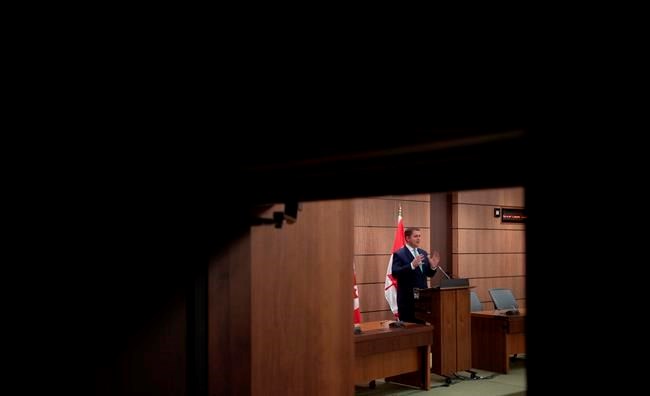 OTTAWA — Hopes that Parliament could speedily approve emergency legislation freeing up billions in aid to help Canadians weather the COVID-19 pandemic were dashed Tuesday over Conservative objections to what they dubbed a Liberal "power grab."

An emergency sitting of the House of Commons was suspended moments after it began as Conservatives balked at provisions that would give the government sweeping powers to unilaterally spend, borrow and change taxation levels without Parliament's approval for the next 21 months.

Conservative Leader Andrew Scheer said early in the day that his party would support emergency efforts to get money to Canadians struggling with the COVID-19 crisis, but would oppose any attempts by the Liberal government to expand its power.

His warning came before a small group of 32 MPs gathered in the Commons to debate and vote on legislation to deliver $82 billion in financial aid and tax deferrals to individuals and businesses, as proposed last week by the government to deal with COVID-19 and its ensuing economic havoc.

They convened as scheduled. However, the sitting had only just begun when government House leader Pablo Rodriguez asked that it be suspended so that the government could continue negotiating details of the legislation with opposition parties.

"Canadians need support to get through this. Fast," Rodriguez tweeted shortly after the sitting was suspended. He said talks were ongoing and he expected MPs to reconvene later Tuesday.

But almost six hours later, Bloc Quebecois Leader Yves-Francois Blanchet angrily denounced the delay. If the government can't get the unanimous consent needed to pass the legislation in one day, as hoped, Blanchet called on the government to put the bill through the normal, lengthy legislative process necessary to get the money flowing as quickly as possible.

He guaranteed Bloc support to approve the legislation.

Blanchet said the Bloc was satisfied with changes it negotiated to the bill on Monday, which would clarify that the government would not use the legislation to increase taxes and that any emergency spending measures undertaken would have to be put to Parliament by Sept. 30.

He said his understanding was that the NDP's concerns with the bill were "rather minor" and that it was only the Conservatives that were standing in the way of moving quickly on it.

"I lost patience when I saw the danger of us not going forward," said a clearly exasperated Blanchet.

The Commons eventually returned briefly Tuesday evening to extend the day's sitting. Negotiations with the Conservatives were to continue and it remained possible that the Commons could yet approve the legislation by the end of the day.

If it does get through the Commons, the plan was for the Senate to approve it Wednesday, followed immediately by royal assent.

At a morning news conference, Scheer said the Conservatives had no issue with the relief package promised by Trudeau last week. But they wouldn't agree to give the government a blank cheque to spend and tax as it pleases for almost two years, as initially proposed in a draft of the bill shared with opposition parties on Monday.

"Any conversation about new government powers should not get in the way of passing this much-needed assistance," he said. "Canadians are counting on us."

Even as Scheer was speaking, Prime Minister Justin Trudeau tweeted that the legislation would be tabled "without clause 2," suggesting the bill would not contain the offending elements.

But in a written statement later, Scheer said there were several "undemocratic" aspects of the bill. "Removing one does not solve the problem," he said.

At his own news conference outside his residence, where he remains in self-isolation after his wife contracted COVID-19, Trudeau said the government is trying to balance the need to act quickly to help Canadians with the need to remain accountable to Parliament.

"It is an exceptional situation that requires extreme flexibility and rapidity of response by governments to be able to help Canadians and react to a situation that we've seen is moving quickly every single day," he said.

"So saying, we have a Parliament that works, we have an Opposition that is doing its job of making sure that we are taking the right steps the right way."

Trudeau arrived late for his news conference because he was on the phone with opposition leaders.

He said the government was negotiating "up until the last minute" to find a way to give it the flexibility it needs to get the money into Canadians' hands quickly while maintaining "our democratic institutions and the values that are so important to us all."

Blanchet said the Bloc agrees the government needs some flexibility to quickly get financial relief to Canadians and businesses without having to recall Parliament each time — but that extraordinary power need not last longer than September.

Scheer, meanwhile, sidestepped questions about whether the Tories are prepared to vote against the emergency-aid bill if it's not changed to their satisfaction. Defeat of the bill would be a vote of no confidence for the minority Liberal government and possibly trigger an election.

The bill only needs one party's support to pass the Commons eventually but it needs the support of every MP present to be put through on the one-day schedule the Liberals want.

"Our hope is that (the government) will stay focused on providing to Canadians, not focused on a power grab. Not focused on giving themselves unprecedented new powers," Scheer said.

The Conservative position on the bill was complicated by one of its own MPs, Scott Reid, who threatened on his website Tuesday to show up in the Commons, despite not being one of the designated 11 Tories who were supposed to be present, and deny the unanimous consent needed to expedite the bill's passage.

He later amended his post to say he has no objection to same-day passage of the relief measures provided MPs have enough time to read and understand the bill.

In an interview with The Canadian Press, Conservative finance critic Pierre Poilievre said the parliamentary budget officer should be allowed to immediately release an analysis of the bill, given the importance of the contents and the limited time for digesting the details.

"The public is not going to know who to believe so let's free the parliamentary budget officer to tell everyone what's inside it, publicly before it gets passed," he said.

In the few minutes the Commons did sit, deputy Speaker Bruce Stanton acknowledged that it was "a highly unusual sitting."

Parliament adjourned on March 13 until at least April 20 as part of a countrywide effort to curb the spread of the virus. It was recalled Tuesday to deal with the emergency aid package but with only about one in every 10 MPs present in the Commons, seated at least two metres apart.

After agreeing to extend the sitting beyond 7 p.m., Scheer began to cross the aisle to speak privately with Rodriguez. The two men pulled up short and spoke to each other at a safe distance.

This report by The Canadian Press was first published March 24, 2020.