Canadians who work on two cruise ships are being allowed off in U.S. ports

Canadians working aboard two cruise ships who weren't allowed to come to shore because of concerns about COVID-19 are finally able to return home.
May 10, 2020 4:00 AM By: Canadian Press 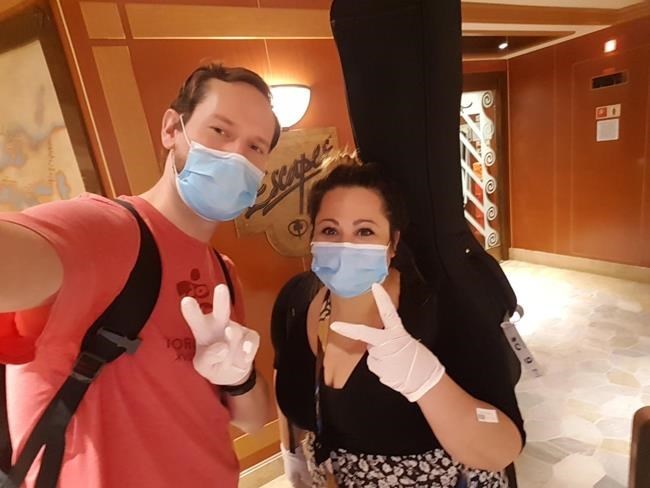 Canadians working aboard two cruise ships who weren't allowed to come to shore because of concerns about COVID-19 are finally able to return home.

Princess Cruises said in an emailed statement that 19 Canadians on the Koningsdam disembarked in Los Angeles on Friday, and that they would be flown or driven home by the company.

The cruise line said another 53 Canadians were scheduled to leave the Emerald Princess in Fort Lauderdale, Fla., on Saturday and would head to Miami where they would board a chartered flight to Toronto.

"We're in Toronto and feeling great even though it's snowing," Michelle Joly, a singer with the company, said in a phone interview Saturday after her charter flight arrived from Florida.

Approximately 99 U.S. crewmembers are also being allowed to leave both vessels, the company said.

The crew on the Emerald Princess had hoped to leave the ship in Nassau, Bahamas, earlier this week, only to be left disappointed.

Global Affairs Canada spokeswoman Katherine Cyr said in an email that the Canadian government had a WestJet flight lined up to return 29 Canadians from Nassau on Tuesday and that the plane was also going to bring home Canadian crew members on cruise ships in the region.

"Despite our best efforts, cruise ship companies were not able to secure approval to disembark in time for the flight," Cyr said.

Leah Prasad, whose husband works as a senior maitre d', said she was shaking when she learned the crew were finally being allowed off the ship in Florida, particularly after their hopes were dashed in the Bahamas.

"You're on such a high that he's going to come home and he was very excited to be coming home. And then you find out that none of the crew are getting off," Prasad said speaking from Cloverdale, B.C., noting that no one on board was sick.

As cases of the novel coronavirus and related deaths have risen worldwide, the U.S. Centers for Disease Control and Prevention and health officials in other countries have expanded the list of conditions that must be met before crews may disembark.

The conditions include taking each crew member straight home via charter plane or private car, and the CDC requires company executives to agree to criminal penalties if crew fail to obey health authorities' orders on their way home.

Joly said her first two weeks with only crew on board were sweet. She was performing aboard the Sky Princess when all the passengers were offloaded on March 14, and she said she continued to perform every second night for her fellow crewmembers.

"We felt like we were having our own mini vacation. We were allowed to utilize a lot of the guest areas that we wouldn't normally use, like the pools, and the pizza and burger place was open," said Joly.

That changed on April 1 when they had to go into self-quarantine and were confined to their cabins, only being allowed out for brief periods, such as for meals. Then she was transferred to the Emerald Princess on April 26, she said.

Prasad, meanwhile, said her husband had been working on the Carnival Ecstasy and continued working after passengers left the vessel in mid-March, right up until his tour was done April 15. After that, there were strict protocols for leaving cabins for meals and fresh-air breaks, and he was eventually transferred to the Emerald Princess.

Much of the time Joly said the ships were anchored off the Bahamas, but they docked every couple of weeks in Florida for supplies.

The CDC said last month that about 80,000 crew members remained on board ships off the U.S. coast after most passengers had disembarked.

Both Joly, who will quarantine for two weeks at her brother's in St. Paul, Alta., and Prasad's husband, who will reunite with his wife in B.C., were spending Saturday night in isolation in a Toronto hotel.

"Everyone was clapping and cheering when we finally touched land," Joly said about when the crew disembarked.

"Let me tell you I'm happy to be out even though I have to go in quarantine now for two weeks."

This report by The Canadian Press was first published May 9, 2020.

—With files from AP