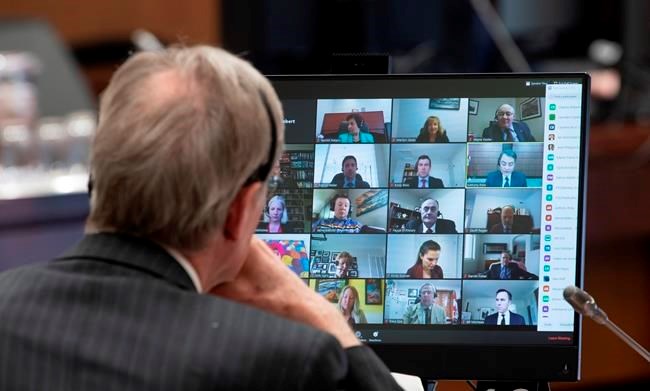 OTTAWA — About 280 MPs took part Tuesday in Canada's first-ever virtual House of Commons and declared it a success despite numerous technical hiccups.

Commons Speaker Anthony Rota wrapped up the historic three-hour meeting with thanks to the chamber's technical staff for ensuring it went "relatively well."

"We did have a few hitches but nobody's perfect," he said.

Technically, Tuesday's video conference was a meeting of a special COVID-19 committee. But all 338 MPs are members of the committee.

The House has been adjourned — except for three days to pass emergency financial aid bills — since mid-March as part of the effort to curb the spread of COVID-19.

The special committee was struck as a way to allow opposition MPs to continue holding the government to account during the pandemic, until virtual sittings of the Commons can be organized officially.

As part of an agreement between the government and opposition parties, a small group of MPs will also meet for an in-person Commons sitting once a week, starting Wednesday, when they are scheduled to deal with legislation authorizing emergency benefits for students.

After Tuesday's debut run of a virtual sitting, Conservative MP Michelle Rempel Garner called for "a virtual round of applause" for the technical staff.

Her praise for the technicians came after fellow Conservative Alain Rayes complained that he'd been cut off from the proceedings for about 15 minutes when he lost his internet connection.

There had been concern that MPs in remote and rural areas might have trouble with internet connections but it turned out Rayes was in his Parliament Hill office when he was shut out.

For the most part, the glitches were momentary and quickly fixed, even though the Speaker's office said approximately 280 MPs, plus 20 Commons staff, were online at the same time.

MPs had to be repeatedly reminded to take themselves off mute when they began to speak. A few, including Natural Resources Minister Seamus O'Regan, couldn't be understood as their audio cut in and out — a problem Rota said could be easily rectified if they all wore headsets with microphones close to their mouths.

The biggest problem appeared to be with the translation, a glitch that continually had MPs complaining they couldn't hear or that the translation was being played at the same volume as the actual speaker. Rota repeatedly reminded MPs that they needed to pick either the English or French channel to avoid that problem.

Most MPs appeared good-humoured about the problems. Health Minister Patty Hajdu laughed at herself when she was unable to initially figure out how to unmute her microphone.

Like many Canadians working from home, some MPs had to contend with noise from their own families.

"You might also hear my son. He doesn't sound very happy in the background," Green MP Jenica Atwin told the committee at one point.

Bloc Quebecois Leader Yves-Francois Blanchet had to pause during his opening statement because something in his office was ringing. He assured people it was not a fire alarm as he tried to find the source of the noise. Unlike the real House of Commons, Rota did not chastise him for the interruption.

The virtual session also provided some visual distractions not normally seen in the Commons.

Industry Minister Navdeep Bains spoke from an office in which a large painting of blue, green, orange, pink and yellow turbans served as a colourful backdrop.

Rota did chastise MPs he caught taking photos of proceedings on their computer screens. Much like photos are not allowed to be taken during Commons sittings or committee meetings, he told them they are not to take photos of virtual proceedings either.

He said he knows it's a "historic" day but warned them not to post any photos they'd taken on social media.

The virtual COVID committee meetings allow for opening ministerial statements and responses from opposition parties, as well as the tabling of petitions.

Hajdu was the first member of cabinet to issue a statement, thanking front-line and essential workers for their service, and Canadians for doing their part to help flatten the curve of the COVID-19 outbreak in Canada.

"We are seeing hopeful evidence that Canada's COVID-19 epidemic is slowing down," she said.

She said the length of time it is taking for the total number of confirmed cases to double, has gone from about three days in late March to more than 16 days now. However, Hajdu said the outbreaks in long-term care homes are responsible for more than three-quarters of all deaths in Canada.

"This is indeed a tragedy," she said.

In the two-hour question and answer session that followed, each MP was allowed five minutes to question ministers. Some 20 MPs got a chance to pose questions.

Scheer wanted to know why Health Canada hasn't fast-tracked approvals for dozens of new COVID-19 test kits to track the illness better; Trudeau said the governments wants to examine them with due care.

Normandin asked why the government hasn't cracked down harder on the use of foreign tax havens; Trudeau said it has cracked down.

Blaikie asked what the government is doing to help seniors and people with disabilities through the pandemic; Trudeau said he's been focused on helping first those whose expected incomes have evaporated but he knows more people need assistance.