Fresh off his trade to the Penguins, Jeff Carter reminisced with Sidney Crosby about their classic battles in rivalry games back when he broke into the NHL with Philadelphia.
Apr 13, 2021 3:55 PM By: Canadian Press 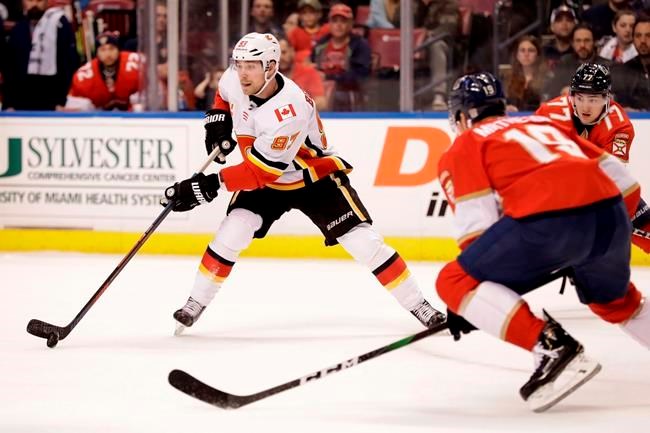 Fresh off his trade to the Penguins, Jeff Carter reminisced with Sidney Crosby about their classic battles in rivalry games back when he broke into the NHL with Philadelphia.

Now Carter can't wait to play against the Flyers, but not because he some ill will a decade after they traded him. They're just something different.

"The schedule's been crazy, right?" Carter said. "I feel like I’ve played Anaheim and Vegas the whole year, so it’ll be nice. Kind of refreshing.”

Beats the same old, same old for 56 games. This unique NHL season with all divisional play gives a vast majority of players traded at the deadline an added perk: A new set of opponents for the remainder of the season.

After months of worrying only about the six other Canadian teams and not caring much about the rest of the league, Sam Bennett will get to play against six Central Division opponents after Calgary dealt him to Florida. Carter can refamiliarize himself with the East Coast. And Anthony Mantha gets to bang bodies with the Islanders, Penguins and Bruins he hasn’t seen in more than a year after joining the Washington Capitals.

“In the years prior I played against all those guys: Pittsburgh or New York or Boston,” Mantha said before making his Capitals debut Tuesday night against Philadelphia. "It’s going to be exciting, obviously, seeing new faces out there. A lot of trades that happened in the last couple days, so you see new bodies in new places and it’s going to be all fun from here.”

More fun for the players traded to a new division than those stuck in the same one. Apologies to Kyle Palmieri and Travis Zajac who went from the Devils to the Islanders; Taylor Hall and Curtis Lazar from the Sabres to the Bruins; David Savard from the Blue Jackets to the Lightning; and Michael Raffl from the Flyers to the Capitals.

Hall and Lazar have the weirdest boomerang effect with Boston. They'll face their former team six times over the final month of the season, including a three-game stint at Buffalo next week.

“That fits in just with how this season’s been going,” Lazar said. “It’s been strange in all aspects."

It was strange for Sami Vatanen to go from New Jersey to Dallas and play immediately for the Stars after getting claimed off waivers. But the veteran said, “It's nice to change it up and have some new challenges there.”

Then there's the challenge of each player getting to know his new teammates after not facing them at all this season, given the schedule. Just as Carter hasn't watched a lot of Penguins games, Bennett doesn't have a good grip on how good a team he's joining in Florida.

“Because we’re so segregated, really I’ve only been paying attention to the North Division,” Bennett said. “I haven’t been able to watch or follow along that closely.”

There are, of course, reputations, and Carter knows a team led by Crosby and Evgeni Malkin plays at a high level. And the Penguins won the Stanley Cup three times sandwiched around Carter's two championships.

Pittsburgh also has another difference Carter is looking forward to after playing in an empty Staples Center in Los Angeles: some people in the seats cheering for the home team.