PHILADELPHIA — Claude Giroux scored twice in 22 seconds to force overtime and was one of three Flyers to score in a shootout as Philadelphia beat the New Jersey Devils 4-3 on Sunday night. The Devils have gone 10 straight games without a win.
Apr 25, 2021 10:33 PM By: Canadian Press 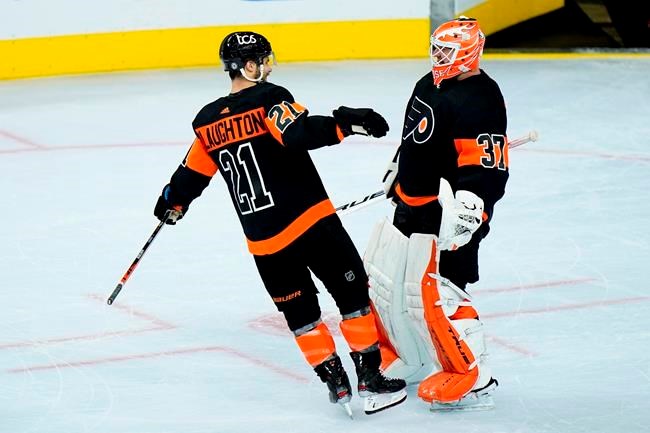 PHILADELPHIA — Claude Giroux scored twice in 22 seconds to force overtime and was one of three Flyers to score in a shootout as Philadelphia beat the New Jersey Devils 4-3 on Sunday night.

The Devils have gone 10 straight games without a win. New Jersey did pick up its first point in that stretch. its fifth point since March 28.

Giroux and Sean Couturier scored in regulation for the Flyers. Brian Elliott had 29 saves.

Giroux scored quickly when the Flyers were in desperation mode with under 90 seconds to play, down by two goals and with the goaltender pulled. He finished a James van Riemsdyk pass for his 12th goal of the season at 18:34 to cut New Jersey’s lead to 3-2. The tandem then connected 22 seconds later on a similar play on the opposite side of the crease, beating Blackwood to the glove side.

“He’s one of the most competitive human beings out there,” Couturier said. “Everything he does, he wants to win. You have no choice but to follow that up. That’s what makes him a great leader and a great captain.”

“When we take care of the puck and win faceoffs, that’s when we are at our best,” said Giroux, who moved past Brian Propp and into third place on the Flyers career point list with 850 points, behind Hall of Famers Bobby Clarke (1,210 points) and Bill Barber (883).

The Devils had a chance on both goals to break up the play. Both times, they couldn’t get the puck away from Giroux’s stick.

“When you are up two goals in the last two minutes, you have to find a way to close it out,” Devils right wing Nathan Bastain said.

New Jersey had the jump on the play early in the game, taking advantage of a leaky Flyers to get several quality scoring chances.

McLeod capitalized on an odd-man rush, taking a feed from Bastian on the left side of the crease and beating Elliott for his eighth goal of the season just 4:56 into the first period.

The Flyers tied it on Couturier’s 14th goal of the season. He tipped a shot from the point by Phillipe Myers past Blackwood.

The Devils took the lead midway through the second period when Bastian — falling to the ice with two Flyers defenders around him — threaded the needle to Miles Wood, who had scored his 16th into a yawning net.

Zacha added his 11th goal when he beat Elliott to the glove side after receiving a backhand pass from Jesper Bratt that appeared to be a critical insurance goal for New Jersey.

New Jersey had a 4-on-3 power play in overtime after Ivan Provorov was whistled for tripping, but mustered only one shot against Elliott.

The shootout reached six rounds and was decided when Kevin Hayes’ backhand slid past Blackwood on the right side of the net. Elliott had just enough glove on Nico Hischier’s shot to keep it from crossing the goal line.

“We seem to be saying it over and over that it’s trending in the right way,” Bastain said. “People start noticing it once the scoreboard starts to tilt. We got out to a lead and we felt comfortable with it. Obviously, things just fell apart at the end.”

Devils: Janne Kuokkanen, who missed Saturday’s game against the Penguins due to a hand injury suffered on Thursday evening, returned to the top line of the New Jersey lineup on Sunday. Jonas Siegenthaler missed his second straight game due to COVID-19 protocols.

Flyers: Shayne Gostisbehere will miss the next seven to 10 days because of a minor medial collateral ligament strain. Gostisbehere was hurt in Philadelphia’s loss on Friday night at the New York Rangers. Sam Morin took Gostisbehere’s spot on the third defensive line Sunday night. … Goaltender Carter Hart missed his fifth game on Sunday night with a knee sprain.

The teams play again Tuesday, this time in New Jersey.