Giving back as part of Sikh Heritage Month

The Algoma Sikh Association raised money for Grocer 4 Good as part of a month-long fundraiser
May 1, 2021 5:29 PM By: SooToday Staff 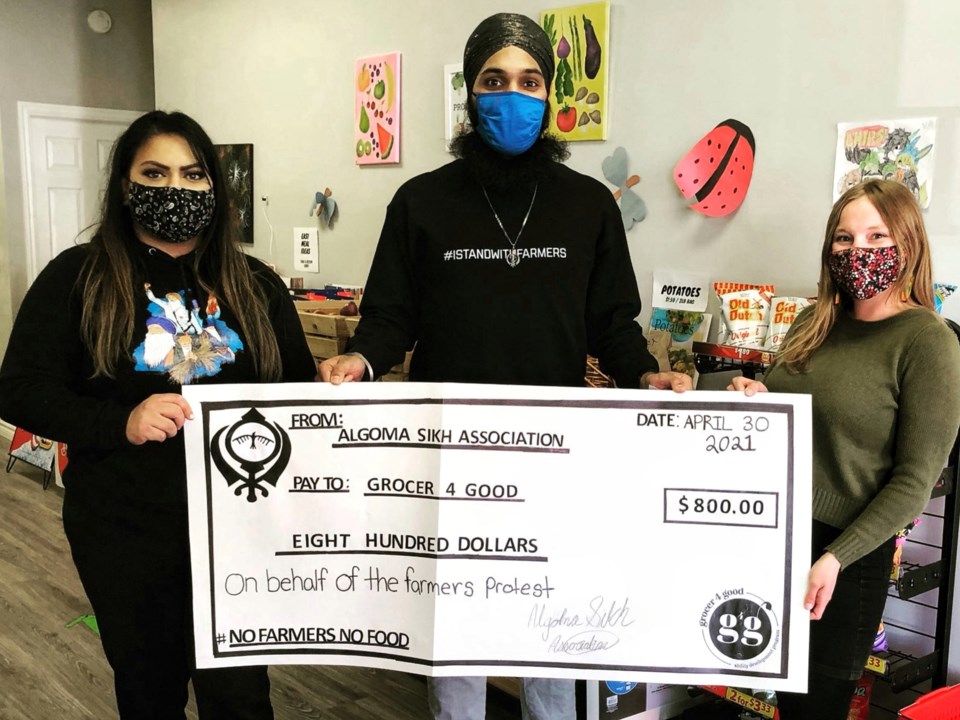 NEWS RELEASE
ALGOMA SIKH ASSOCIATION
*************************
Throughout the month of April, Sikhs across Canada commemorate Sikh Heritage Month celebrating over 100 years of Sikh-Canadian history. Usually through initiatives such as Langar (free community-kitchens), Seva (selfless-service), Dasvandh (charitable donations), Sikhs across the world mark this month as an auspicious time. This year, the local Sikh community spent the month fundraising for Grocer 4 Good, a local organization which has just attained Charity status in April!

“Giving back to the community gives one a feeling of 'Chardi Kala' (rising positive spirits). I was inspired by the #FarmersProtest wherein even though millions of our elders have been on the streets of Delhi peacefully protesting unjust agriculture reform since December 2020, they have taken it upon themselves to address social issues in Delhi which the government has turned a blind eye to- whether that be setting up schools for children dealing with poverty, providing hot meals for the hungry, providing free feminine-hygiene products, and much more.

Our initial plan was to run a food drive with the broader Sault Ste. Marie community but after consulting with APH upon hearing of the stay-at-home order, we decided to fundraise within the local Sikh community instead in order to adhere to all public health guidelines. I was excited to learn Sault Ste. Marie officially has a new local charity addressing various community needs such as addressing food-insecurity, underemployment, and much more. We believe this donation is a great way to congratulate Grocer 4 Good on their recent charitable status granted by the Charities Directorate and to recognize the important work they are doing in Sault Ste. Marie.

Since Walmart closed in Station Mall, there was no grocer in downtown. This left the only option for many residents to travel out of the area for their foods. Many do not have vehicles which adds another layer of difficulty for this situation, especially during the northern winters we have here. We appreciate all that Grocer 4 Good is doing in uplifting the community.” – Gurwinder Singh, Founder and President of Algoma Sikh Association

April is a time of celebration for Sikhs, from Vaisakhi (the day the Khalsa was initiated the Khalsa in April 1699) This year, the tone has gone from celebratory to one of solidarity and resilience after a white supremist took the lives of eight people at a FedEx warehouse in Indianapolis. This tore open wounds of trauma many North-American Sikhs felt after the mass shootings which took place in Oak Creek in August 2012, which took the lives of six people, and in Kabul in March 2020 which took the lives of 25 people.

The Algoma Sikh Association donated $100 for each live lost but this senseless tragedy a fortnight ago.