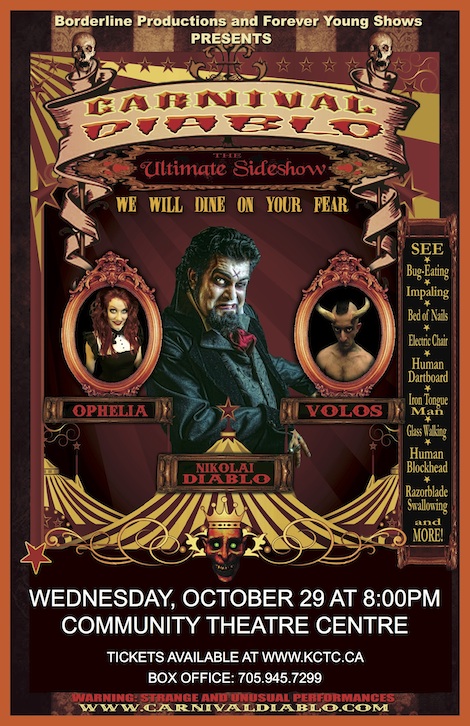 It features amazing human marvels that defy the laws of science, serving up a world of adrenaline driven excitement!

Have your tickets ready.

The feats performed are real, this is no magic show.

Emerged from the great carnival and circus sideshows of Europe, Carnival Diablo formed over 20 years ago.

Scott McClelland, grandson of the legendary Prof. N.P. Lewchuk, follows in the grand tradition in the starring role.

As Nikolai Diablo he brings with him a burning hunger for the freakish and the uncanny.

He delights in bringing to the stage the most unusual human marvels on the planet.

Carnival Diablo has had TV Specials on The Discovery Channel, The Learning Channel, National Geographic, A&E, CTV and CBC.

The media frenzy exists because Carnival Diablo is so unique to the industry.

This is a main stage event, a full sensory assault loaded with audience participation. You won’t believe your eyes!

Tickets are available online at www.kctc.ca or call the box office at 705-945-7299, located in the Station Mall.