Martha McCabe wants kids to know that even superstar athletes are people too
Sep 16, 2016 10:00 AM By: Brad Coccimiglio 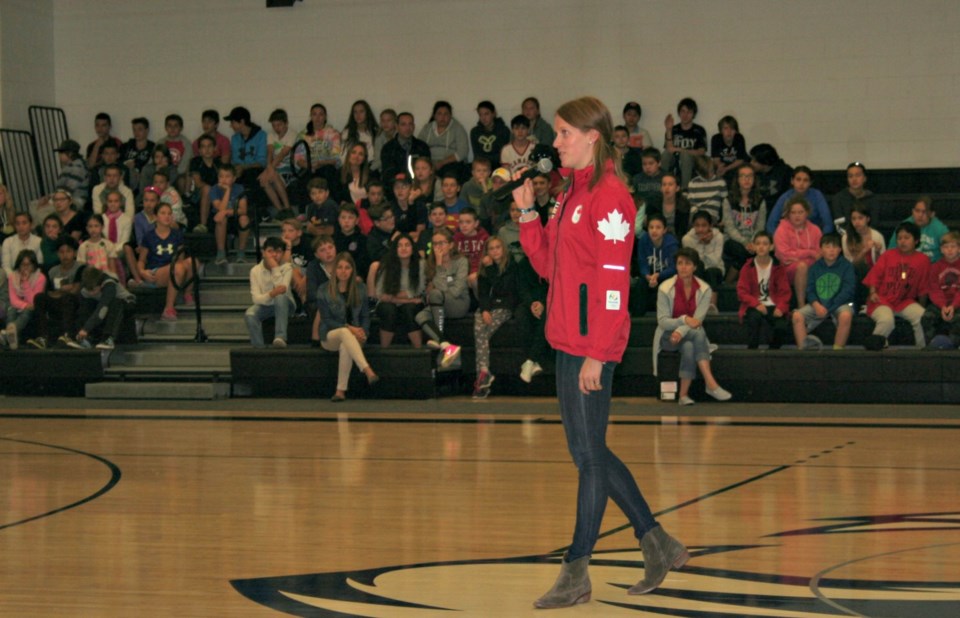 She has done it before, but this was a new opportunity for two-time Canadian Olympian Martha McCabe.

A member of the Canadian National Swim Team, McCabe is currently en route through the country, speaking in various cities along the way on her experiences as an Olympic athlete.

McCabe is in Sault Ste. Marie and spoke at Sault College on Thursday morning, telling students in attendance about how she has been able to handle the rigours of being a high-end athlete.

McCabe said she began speaking to groups in 2011 after she won bronze at the World Championships in Shanghai.

“It was then that I thought after the Olympics when there’s still that buzz I should drive across Canada and reach as many people as I could,” McCabe said. “At that time I was in school so I couldn’t really plan it.”

She kept the idea quiet initially until she had the opportunity to put more effort to organizing the tour.

“I made it my little project and it’s coming together awesome,” McCabe said.

The drive kicked off in Nanaimo and Victoria, BC on Aug. 30 and wraps up on Sept. 21 in Toronto.

On the way she has stopped in 18 cities prior to Sault Ste. Marie and it has been well received.

“One of the main reasons I’m doing the drive is to show kids that all superstars, Olympians and medalists are people too and they’re no different than you or I,” McCabe said. “That’s a big goal of mine and a big reason that I’m going to these small towns.”

McCabe served as a co-captain of the Canadian swim team at the recently completed Olympic Games in Rio De Janiero and spoke of how impressed she was of medalists Penny Oleksiak and Taylor Ruck, the two youngest members of the team at 16.

“The two youngest girls walked into that swim meet and treated it like it was a provincial meet,” McCabe said. “They were there to race and they were there to win. It was amazing to be part of that and see it firsthand. Watching Penny over the past couple of years, she’s been a kid training. She walked in and didn’t care if she was beside a world record holder. She just wanted to race and she just wanted to win.

“It’s amazing to see that kind of perspective of it,” McCabe added. “As you go through and experience it, sometimes your perspective changes but sometimes it is that first perspective that you want to get back, which is just to go out and race and have fun. It was really cool to see.”

“The experience was awesome,” McCabe said. “Especially being a part of the swim team.

“What we did as a team was unbelievable,” McCabe added. “Just being a part of that was exciting and an honour.”

Rio represented McCabe’s second Olympics after competing in the 2012 games in London. She would say that of all of the concerns heading into the Rio games, the event went smoothly.

“Each Olympics has a different feel,” McCabe said. “All of the talk leading into Rio made a lot of people concerned about what was going to happen but nothing bad happened. It went really well.”

Though she participated in various sports growing up, McCabe said she began to focus on swimming in her teens.

“When I was 16, that’s when I really started to focus on swimming,” McCabe said. “A big thing for me was that my two older sisters (Carolyn and Ally) were swimmers so I knew what the road was like,” McCabe said. “I had that little extra knack for swimming. That was where my talent was a little more than other sports so I ran with it.”

Though she could still find herself competing for the foreseeable future, McCabe said she doesn’t plan to be swimming in the 2020 Olympics.

“My mind is starting to focus on other things and get excited about other things,” McCabe said. “I really feel confident walking away from the sport, whether that happens immediately or in a couple of years I’m not sure but I’m pretty certain I won’t be on Tokyo. Not for swimming at least.”