Thunderbirds win a crazy one

It was probably one of the craziest games that the coaches and players have ever been a part of.
Mar 4, 2004 12:22 AM By: Brad Coccimiglio 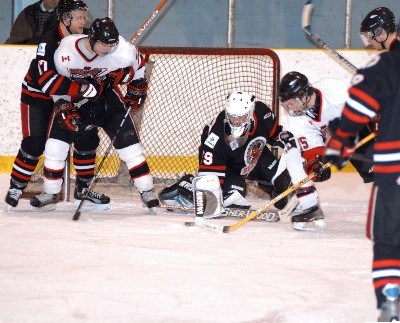 It was probably one of the craziest games that the coaches and players have ever been a part of.

On Wednesday night, the Blind River Beavers and the Soo Thunderbirds did battle at the John Rhodes Community Centre and every fan in attendance got their money's worth as the Thunderbirds fought back for an 11-6 victory over the Beavers.

The Beavers got off to a hot start as Drew Paul opened the scoring on Soo goaltender Jarrett Michaels just 22 seconds into the contest. Then, 22 seconds later Billy Schill gave the Beavers a 2-0 lead when he scored on a breakaway 44 seconds in. Paul then scored his second of the game at 1:59 to chase Michaels from the game.

Darren Rainville added to the lead at 2:25 when he beat Casey Mapes, who had just entered the game in relief of Michaels. With the 4-0 lead after just 2:25 gone in the period, the Beavers looked for more and added to the lead when Jesse Gionette scored at 15:16 on a delayed penalty call.

Paul had a chance to score his third goal of the period late but was stopped on a shorthanded breakaway by Mapes. Schill then scored his second goal of the game on the power play at 19:18 to cap off the first period scoring and give the Beavers a 6-0 lead after one period.

The Thunderbirds took over in the second period starting just 19 seconds in when D.J. Jelitto, who earned the nod as the game's first star, scored the first of what would be three goals for him on the night as he beat Blind River starter Brock Lees on a wrap around.

Josh Leddy then cut the lead to 6-2 as he beat Lees with a shot from the high slot that got through traffic in front at 4:25. Matt Dias, who had a solid game, cut the lead to half as he scored his first of two goals at 6:13, when he knocked a loose puck past Lees.

Jelitto cut the lead even further when he scored at 7:51. Dias then scored his second of the night at 9:09 to make the score 6-5.

The game wasn't all offence though as the goaltenders were forced to make a big stop or two as evidenced by a big stop by Lees on Jason Weigel not long after the second Dias goal.

Jelitto then got the game back on even terms as he scored the second of just two power play goals in the game at 12:42, a goal that chased Lees from the game in favour of Kevin King.

King had trouble stopping the bleeding as Weigel fed a perfect pass to Mike MacMillan who beat King to give the Thunderbirds a 7-6 lead at 13:55. In the final minute Ryan MacKay capped off an eight goal second period outburst at 19:40 to send the game into the third period with the Thunderbirds now leading 8-6.

The second period saw the Thunderbirds outshoot the Beavers 31-5. Also, up until this point, all 14 goals that were scored in the opening two periods were scored on the same net.

The Thunderbirds changed that trend in the third though as Tom Vernelli got in on the act as he beat King at 7:38. Aaron Anderson, who was named the third star of the game, capped off the scoring with two goals just over four minutes apart at 14:09 and 18:35 to make the final 11-6 for the Thunderbirds.

Michaels and Mapes stopped 20 shots in goal for the Thunderbirds, while Lees and King were much busier in the Blind River goal as they combined to stop 47 of 58 Soo shots on the night.

Thunderbirds coach Jim Capy summed the game up saying "that had to be the craziest game I've ever been a part of."

Capy was disappointed that his team gave up the lead in the first period but was very pleased with their ability to show character and battle back from the six goal deficit.

"We gave up some bad goals in the first. We weren't ready," Capy said. "Obviously they showed me something to come back from six goals down. We're happy to get the win and clinch first."

Capy also commended the Beavers and how they came out hard but also credited his club with battling back.

"There's no fluke to why Blind River scored the first six goals and why we scored the next eleven," Capy said. "It's time people stop underestimating teams like Blind River and Manitoulin."

The Thunderbirds played the game without the services of four regulars. Defencemen Greg Egan, who recently joined the club, and Darren Michelutti were involved with school exams, while defenceman Andrew Jakubaitis was suffering the effects of a minor concussion.

Forward Eric Sargent, who joined the team from Toledo of the North American Hockey League, did not play as he left the team for personal reasons and will not return.

The Thunderbirds now hit the road for three games as they take on Manitoulin on Friday night, Abitibi on Saturday, and Northern Michigan next Wednesday.

Next home action for the Thunderbirds will be on March 12 when they take on the Manitoulin Wild at the John Rhodes Community Centre at 7:30 p.m.