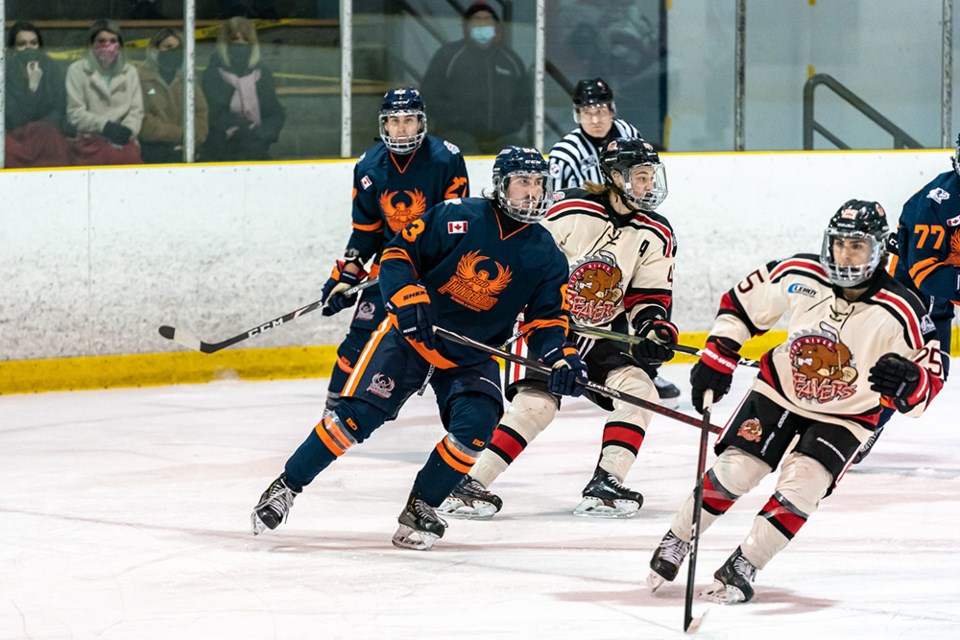 Game five of the COVID Cup is in the books and the Soo Thunderbirds have plenty to be happy about.

“That was overall, the game team we’ve played to a man this year,” said Thunderbirds coach Denny Lambert.

“I’m really excited about how well they played together as a team,” Lambert added.

With the game tied at one, the Thunderbirds scored four times in just over nine minutes to start the second period in the contest.

“Our cycle getting the puck down low, and our D activating created a lot of sustained pressure in their zone in that time,” Lambert said. “The way we controlled the puck in the offensive zone, working it and cycling it, we really played a lot of minutes in their zone at that time.”

Defenceman Warner Young had a big night for the Thunderbirds, scoring three times in the win.

“He’s getting confidence in that area, which is great to see,” Lambert said. “With his skating ability and his puck handling ability, when he wants to go and take charge, he can do that. He’s got the ability to lead the rush and jump into the play. If he played that way every game, there’s no reason, in my opinion, that he can’t play in the NCAA. He was outstanding tonight.”

Young’s first goal, a power play marker early in the second period, broke a 1-1 tie and kicked off the scoring barrage for the Sault.

Young beat Beavers goaltender Wyatt Courchaine on a sharp-angle shot from the right side 1:36 into the frame.

Just under four minutes later, Brock Santa Maria took a pass from Andrew Malek below the goal line and beat Courchaine to make it 3-1.

Young got his second of the night at 8:27 of the second period when he went to the net and redirected a pass from Cooper Smyl to make it 5-1.

Michael Chaffay rounded out the scoring in the second period 35 seconds later as he slid a backhand past Gavin Disano, who replaced Courchaine after Young’s second goal.

Young finished the night with four points while Santa Maria had a goal and two assists. Chaffay and Noah Boman chipped in with a goal and an assist each. Parker Morgan and Russell Oldham had the other goals for the Thunderbirds.

Smyl assisted on a pair of Sault goals.

“His professionalism in the way he approaches the game and the way he prepares and the way he stays focused throughout the game is outstanding,” Lambert said. “He’s been a stalwart for our team all season. Every game he’s played, he’s been unbelievable. And he’s just continuing to do it. He’s getting better and better.”

Matt Cato had the lone goal for the Beavers.

Courchaine stopped 18 of 22 Thunderbirds shots before being pulled. Disano stopped 22 of 25 the rest of the way.