Starting strong the key to victory 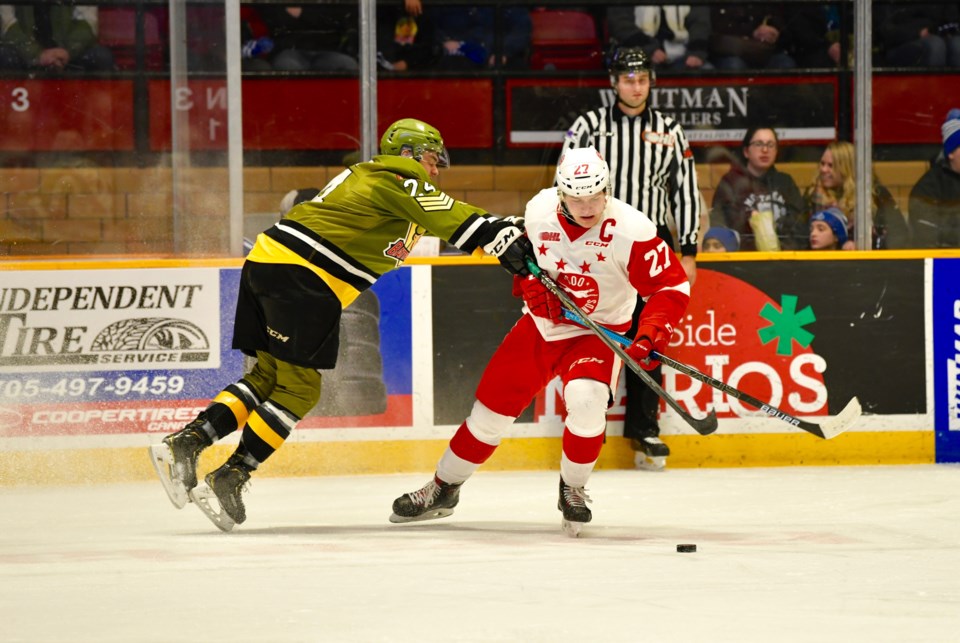 It was about as good a start as they could have hoped for as a three-game Ontario Hockey League road trip opened up for the Soo Greyhounds on Thursday night.

Facing a team that had 10 wins in its last 13 games, the Greyhounds scored three times in the first period en route to a 5-1 win over the North Bay Battalion Thursday at the North Bay Memorial Gardens.

“We played a really solid 20 minutes and that’s the type of hockey we want to play,” said Greyhounds Coach John Dean. “That’s a big credit to our leadership group, who led the way for the first couple of shifts and the young guys followed.”

“In the first five or six minutes, our leadership group went out of their way to do things properly,” Dean also said. “There were clean exits out of our zone, guys managed the puck really well and it led to a lot of odd-man rushes for us and really good possession of the puck.”

“We saw their record in their last 10 games and we knew we had to come out and put the hammer down,” said Greyhounds forward Ryan Roth, who had a goal and an assist in the win.

For the Battalion, Assistant Coach Adam Dennis said the slow start was “too big a hole to dig out of.”

“I thought periods two and three we started to play them a little bit more physical and played a bit more of our game and it was a little closer,” Dennis also said. “We got our shot totals back but as far as the start of the game it was too big of a hole to dig out of.”

It was the second consecutive night the Battalion struggled out of the gate.

In a 5-0 loss to Sudbury on Wednesday, the Battalion surrendered a pair of goals before the game was three minutes old and trailed 4-0 through 20 minutes in a 5-0 loss to the Wolves.

“We do a pre-scout on every game and at this point it becomes a little bit more about our leadership group to make sure the group is ready to go,” Dennis said. “When it happens (Wednesday) in Sudbury you can say it is a one off, but when it happens on back to back nights you have got to address, and it is something we need to fix.”

For Peca, the goal gives the 19-year-old two goals and six points in six games with the Greyhounds since being acquired from the Barrie Colts.

“He’s just stepped right into the culture that we’re creating here,” Dean said. “He works exceptionally hard and the guys in the room absolutely love him. When you come in and work that hard, he won over the room in the first game.”

Zack Trott also had a goal in the win.

Justin Brazeau had the lone goal for North Bay while goaltender Christian Propp made 34 saves.

The Greyhounds will take a 28-10-4-1 record into Barrie on Saturday night for a game against the Colts before wrapping up the trip in Sudbury on Sunday afternoon against the Wolves.

In other action around the OHL on Thursday night, in St. Catharines, Ben Jones scored three times as the Niagara IceDogs blew out the Hamilton Bulldogs 10-0. Jason Robertson assisted on four goals for the IceDogs. Jack Studnicka added a goal and two assists while Philip Tomasino and Kyen Sopa added a pair of goals each for Niagara. Stephen Dhillon made 21 saves for the shutout.

In Peterborough, a four-goal opening period lifted the Guelph Storm to a 5-3 win over the Peterborough Petes. Isaac Ratcliffe scored a pair of goals for Guelph. Alexey Toropchenko and Liam Hawel had a goal and an assist each for Guelph.

- With files from Chris Dawson/BayToday