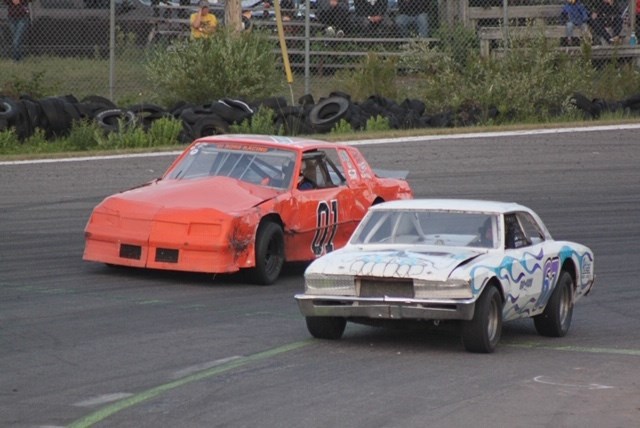 Jarritt Varcoe in the #67 is the only driver to beat #01 Jerry Ross in a feature race this season in the Factory Stock Division. Ross has won six of seven features to date this year. Photo supplied

Finishes in four division were as follows:

Bolduc finished his races ahead of current points leader Mark Laakso, bringing Bolduc within 12 points of the leader.

Hiiemaa holds a 31-point lead over Jackson in the standings, not yet enough to be declared division champion.

Ross now holds a 45 point lead over Jamie Fox, sufficient to declare him champion in the division.

Kern maintains in the top spot of the division with 181 points, followed by Kurnell who sits 17 points behind.

The final event of the Laird season will be held Sept. 13 and 14, as the track hosts the annual Northern Stars Invitational weekend. The event includes overnight camping, a demolition derby and more.