In our latest Q&A session, we caught up with varsity Sault Sabercats player Jacob Jurich
0
Jul 15, 2019 10:00 AM By: Brad Coccimiglio 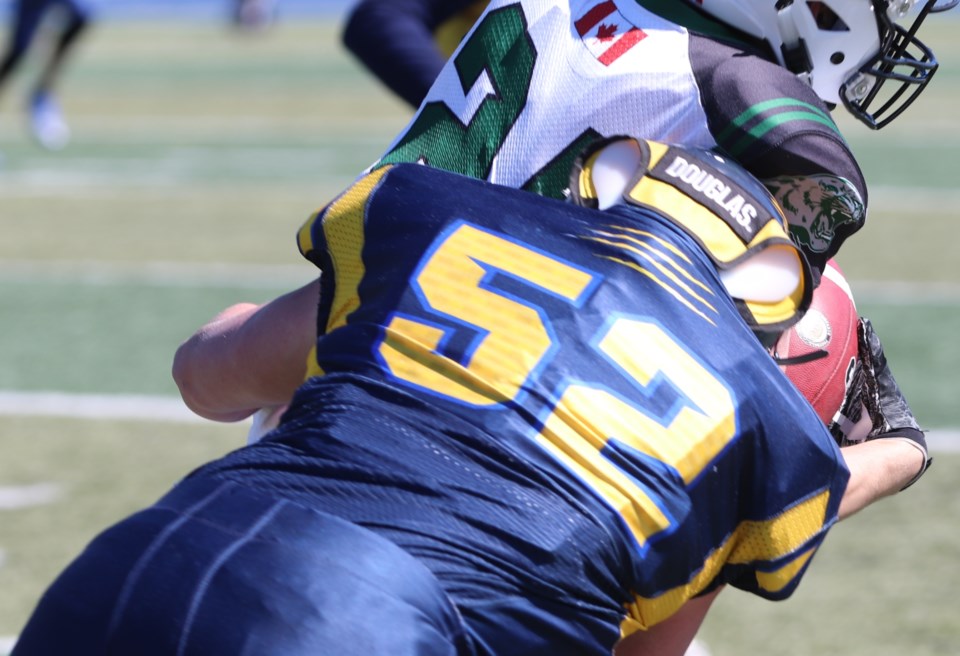 Jacob Jurich making a tackle during a Sabercats game against the Chatham Cougars on June 15. Brad Coccimiglio/SooToday

His uncle played a big role in him getting involved in the sport and Jacob Jurich has become well-known as a player both in the local high school loop as well as a member of the Sault Sabercats varsity Ontario Football Conference squad.

SooToday recently caught up with Jurich for our latest Q&A session.

JJ: Probably Sault Minor Football and winning my first football championship. I was eight. That’s where it started. I played for LopLops.

Q: What other sports are you interested in that people wouldn’t expect?

JJ: Wrestling. I started in grade nine and it was something that I was good at. I went to OFSAA and it just stuck.

Q: Who are three people, dead or alive, that you would like to have dinner with and why?

JJ: I would have to say my grandfather and my grandmother. They passed away when I was about 7-years-old and they never got to watch me play football. I’d like to have dinner with them and tell them about what I’ve accomplished in football and all sports and just life in general.

Q: Aside from your current job, what non-sports career are you interested in and why?

JJ: A millwright or a welder-fabricator.

Q: What person, living or dead, do you admire most and why?

JJ: My uncle Bill. I admire him so much. He’s done everything for me. He’s supported me all the way and paid for my football. He’s done more that what I could ask for. I live with him. He’s pretty much like a father to me.

Q: If you could be commissioner for a day, what changes would you make to the sport?

JJ: (I would change) cut-blocking down field. I don’t like that rule. It’s injured me like four times this year.

JJ: If you do nothing, you are nothing.

It was a quote I heard in grade nine English. It says, ‘If you do nothing, you are nothing. You have no essence; you have no life.’

Q: What’s something people would be surprised to learn about you?

JJ: It may seem like I’m a mean kind of guy and that I’m quiet but I’m actually just very observant and nice and never really been mean to anyone that I’ve known.

Q: If you could have any super power, what would it be?

JJ: The ability to never run out of money.

Q: If you were stranded on an island, what three things would you bring with you?

JJ: Something to start a fire, a knife, and a book or something to keep me sane.

Super speed would come in handy for this Sault Sabercats quarterback
Jul 8, 2019 10:00 AM
Comments
We welcome your feedback and encourage you to share your thoughts on this story. We ask that you be respectful of others and their points of view, refrain from personal attacks and stay on topic. To learn about our commenting policies and how we moderate, please read our Community Guidelines.